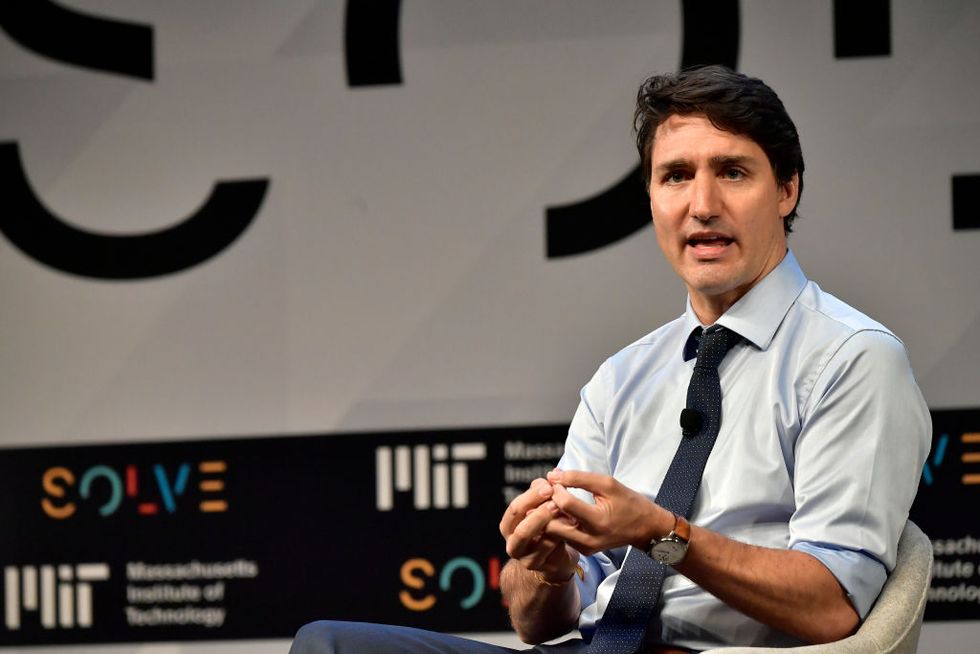 CAMBRIDGE, MA - MAY 18: Canadian Prime Minister Justin Trudeau is interviewed by MIT's Danielle Wood at Solve At MIT: Plenary - True Stories Of Starting Up at Massachusetts Institute of Technology on May 18, 2018 in Cambridge, Massachusetts. (Photo by Paul Marotta/Getty Images for MIT Solve)

Journalists tell the stories of our communities, protect democracy, & often put their lives on the line just to do… https://t.co/TqtU9orqrD
— Justin Trudeau (@Justin Trudeau) 1530237471.0

@JustinTrudeau Thank you for being a great leader of our terrific neighbor, Canada.
— Melissa (@Melissa) 1530237585.0

@JustinTrudeau Thank you for saying what our President cannot.
— Kristopher (@Kristopher) 1530237553.0

By contrast, President Donald Trump's response to the shooting has garnered criticism. Yesterday, the president offered his "thoughts and prayers" to the victims of the shooting.

Prior to departing Wisconsin, I was briefed on the shooting at Capital Gazette in Annapolis, Maryland. My thoughts… https://t.co/DUhjdWWxBP
— Donald J. Trump (@Donald J. Trump) 1530218995.0

The president issued another response during a White House press conference earlier today, noting that journalists should be able to do their jobs without fearing for their lives.

“I’d like to to address the horrific shooting that took place yesterday at Capital Gazette newsroom in Annapolis, Maryland," Trump said at the White House. "This attack shocked the conscience of our Nation, and filled our hearts with grief. Journalists, like all Americans, should be free from the fear of being violently attacked while doing their job."

To the families of the victims, there are no words to express our sorrow for your loss. Horrible, horrible event — horrible thing happened. When you’re suffering, we pledge our eternal support. This suffering is so great. I’ve seen some of the people — so great. My government will not rest until we have done everything in our power to reduce violent crime and to protect innocent life. We will not ever leave your side. So, our warmest, best wishes and regrets. Horrific horrible thing.

The president's words rang hollow with many observers who cited his penchant for referring to the media as "fake news" and for branding it "the enemy of the people." He has further come under fire for his assertions that journalists are inherently dishonest. The president has often criticized news outlets for their coverage of Special Counsel Robert Mueller's investigation into Russian interference in the 2016 presidential election. His attacks on First Amendment rights are well documented; he once infamously claimed that he would seek to amend libel laws and penalize journalists who've reported negative coverage about him and his associates.

The #Capital Gazette killer was an angry #WhiteDomesticTerrorist fueled in his anger by a raving, idiotic… https://t.co/yTi0KB5nfM
— Hawaii Shira (@Hawaii Shira) 1530299385.0

Capital Gazette survivor Selene San Felice, told reporters that the survivors of the shootings "need more than prayers," a nod to repeated calls for sensible gun control measures in the wake of numerous mass shootings, particularly the one in Parkland, Florida, which continues to galvanize much of the nation.

“I reported on Pulse when Pulse happened. I went to school in Florida, and I remember being so upset hearing about the victims who were texting their families, and there I was, sitting under a desk, texting my parents, telling them I love them,” San Felice said. “I just don’t know what I want right now, right? But I’m gonna need more than a couple days of news coverage and some thoughts and prayers, because it’s — our whole lives have been shattered. And so thanks for your prayers, but couldn’t give a fuck about them if there’s nothing else.”

White House Press Secretary Sarah Huckabee Sanders has echoed the president's condolences, calling the shooting a “violent attack on innocent journalists doing their job is an attack on every American."

Sanders herself has been subjected to heavy criticism for her treatment of the White House press corp during daily press briefings.

Earlier, Sanders said there is "always going to be a little bit of friction" between the White House and members of the press, calling it "a constant give-and-take."