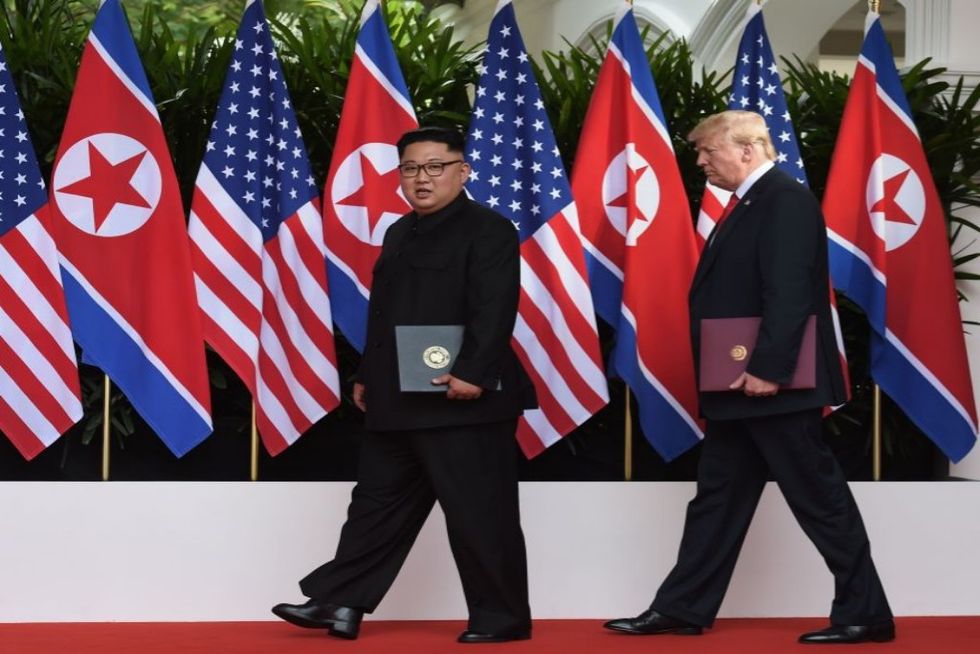 North Korea's leader Kim Jong Un walks out in front of US President Donald Trump after taking part in a signing ceremony at the end of their North Korea-US summit, at the Capella Hotel on Sentosa island in Singapore on June 12, 2018. (Photo by ANTHONY WALLACE/AFP/Getty Images)

The 2018 North Korea–United States summit, or Singapore Summit, is the first between a United States President and the North Korean leader. It took place on June 12, 2018 at the Capella Hotel on Sentosa Island in Singapore between Kim Jong Un and Donald Trump.

The two leaders signed a joint statement during their meeting and released it to the public on Tuesday morning.

While the White House is certainly going to count this as a win for President Trump, analysts looking at the statement and the information released say the news is not good.

Translation: North Korea for now does not offer anything but platitudes previously uttered before in exchange for m… https://t.co/EdhIigCpIK
— Glenn Kessler (@Glenn Kessler) 1528808157.0

This is very disappointing. Each of the four main points was in previous documents with NK, some in a stronger, mor… https://t.co/TBgnQOKuxi
— Bruce Klingner (@Bruce Klingner) 1528789873.0

Trump got NOTHING. Literally nothing. There is NO denuclearization, NO inspection regime. All Kim did was sign a… https://t.co/ZlHXjNizYs
— Mikel Jollett (@Mikel Jollett) 1528809059.0

Guess what famous phrase bandied about by Trump aides does NOT appear in the joint statement that emerged from the… https://t.co/kEpWpxTDTn
— Nahal Toosi (@Nahal Toosi) 1528803911.0

Of course Trump's friends at Fox News had a different spin than the rest of the news media and political analysts.

In addition to the lack of concessions by North Korea in the joint statement signed by Kim Jong Un and Donald Trump, people — even on Fox News — are critical of the praise Trump had for a known dictator with documented serious human rights violations.

Have to admit my head is spinning from a world where Canada is POTUS's enemy and rotting in hell, and North Korea i… https://t.co/dOVjBNyXH1
— Susan Glasser (@Susan Glasser) 1528805773.0

And some raised questions about Trump's motives for the summit. Is a Trump Hotel Pyongyang coming soon?

The ultimate results of the Singapore Summit remain to be seen. However the joint statement lacks the teeth needed to affect any real change in North Korean policy while the United States, or the Trump administration, may not recover from looking like they were outmaneuvered by a foreign leader Trump used to openly mock.