Sarah Sanders Repeated a False Claim About the Media and Osama bin Laden, and CNN Just Called Her Out 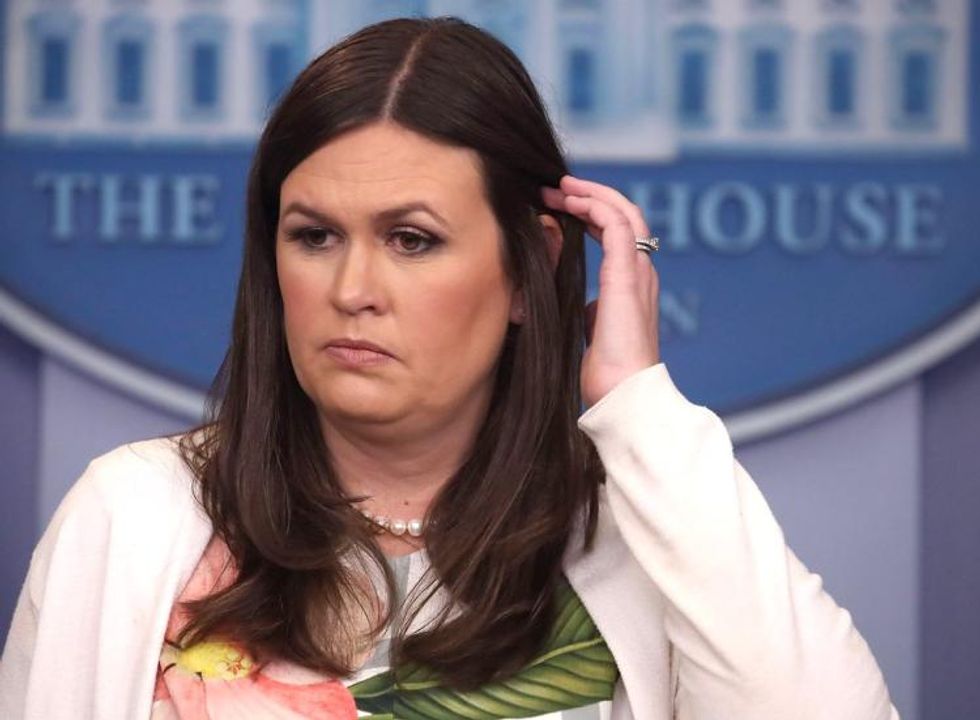 White House Press Secretary Sarah Sanders is under scrutiny after she claimed that the media is at fault for thwarting U.S. spying on Osama bin Laden's activities prior to the 9/11 terrorist attacks.

Sanders said the following as she answered a question about threats and insults reporters have faced from Trump supporters:

When it comes to the media the president does think that the media holds a responsibility. We fully support a free press, but there also comes a high level of responsibility with that. The media routinely reports on classified information and government secrets that put lives in danger and risks valuable national security tools. One of the worst cases was the reporting on the U.S. ability to listen to Osama Bin Laden's satellite phone in the late 90s. Because of that reporting, he stopped using that phone and the country lost valuable intelligence.

That story has been debunked––and CNN soon called Sanders out.

As CNN's Jeremy Diamond notes in the piece:

That assertion is false and has previously been debunked years ago.

Sanders did not respond to CNN requests asking which article she was specifically referring to, but Sanders appeared to be drawing on a claim by former President George W. Bush and the 9/11 Commission.

Bush and the commission in 2005 blamed an August 1998 article in The Washington Times for revealing that the US government had the ability to monitor bin Laden's satellite communications.

The story in question did not claim that the US government was monitoring the phone, instead merely reporting that bin Laden used a satellite phone––something that was widely known at the time. Further, a Washington Post article from the time of Bush's accusation points out that the Taliban, and bin Laden himself, not the US government, were the sources of information about bin Laden's phone usage.

Several media reports, including one from CNN, around the time of the August 1998 Washington Times story also noted that bin Laden used a satellite phone, including to conduct media interviews. Only a USAToday story from around that time quoted a former US official noting that bin Laden "had a fondness for his cell phone."

Diamond goes on to note that:

Despite the lack of reporting about the US government monitoring that phone, some national security officials at the time later claimed bin Laden's [sic] stopped using that satellite phone because of the Washington Times report––and the 9/11 commission later parroted that assertion.

On September 7, 1998 a US newspaper, the Los Angeles Times, reported on US government monitoring of bin Laden's satellite phone––but in that same article they noted that bin Laden could be scaling back use of the devices.

Sanders, for her part, finally responded to CNN, and she stuck to her claims despite being debunked.

The message prompted MSNBC's Chris Hayes to ask what Sanders's assertions "have to do with yelling and cursing at a reporter doing a stand up."

“But then speaking of fake news, you have Sarah Huckabee Sanders pushing a lie,” Scarborough said. “The fake news about some report on Osama bin Laden and how the press actually stopped American military men and women from catching [bin Laden]. She might as well have said Neil Armstrong never walked on the moon. Just pure conspiracy, ‘Pizzagate’ nonsense.”

"Widely debunked theory that goes back to his rally two nights ago,” Geist said. “Those QAnon we talked about this yesterday. The signs up everywhere. There’s conspiracy theories all over the place. Not only are they not squashing them, but they’re promoting them from the lectern of the briefing room.”