A Polling Firm Asked People to Describe Trump's Child Separation Policy In One Word, and the Results Speak Volumes 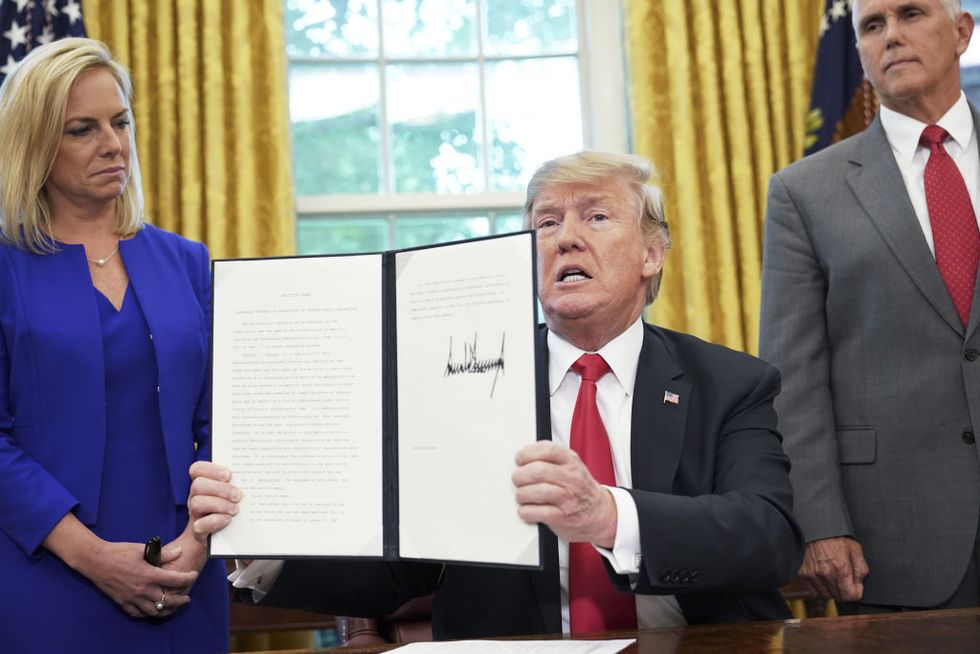 Watched by Homeland Security Secretary Kirstjen Nielsen (L) and Vice President Mike Pence, US President Donald Trump shows an executive order on immigration which he just signed in the Oval Office of the White House on June 20, 2018 in Washington, DC. - US President Donald Trump on Wednesday signed an executive order aimed at putting an end to the controversial separation of migrant families at the border, reversing a harsh practice that had earned international scorn."It's about keeping families together," Trump said at the signing ceremony. "I did not like the sight of families being separated," he added. (Photo by Mandel Ngan / AFP / Getty Images)

A new Quinnipiac poll is out. The subject: President Donald Trump's immigration policy, specifically the highly contentious "zero tolerance" family separations policy which faced criticism so heated, the president was forced to sign an executive order––a flawed one, but an executive order nonetheless––which "ends" the policy.

Yet it continues, with reports of migrant children as young as three years old brought before judges with little to no legal recourse. Many political leaders and commentators have openly condemned the policy and now, the Quinnipiac poll has taken questions about the policy to the American public.

Quinnipiac asked respondents to describe in one word how they "feel about children being separated from their parents at the border." It's worth noting that numbers below are not percentages. "Figures show the number of times each response was given. This table reports only words that were mentioned at least five times," Quinnipiac says.

Responses to the poll have been somewhat mixed, as evidenced by Quinnipiac's Twitter feed.

Other questions from Quinnipiac's survey reveal a shift in attitudes toward migrants.

For example, Quinnipiac asked respondents if they believed undocumented immigrants were more likely to commit crime than American citizens.

A question about the motives behind President Trump's immigration policy yielded some rather divided results. For example, Republicans by a wide margin responded that the president has a "sincere interest in controlling our borders." Only 15 percent of Democrat respondents said the same. By contrast, 80 percent of Democrat respondents believe the president's immigration policy is racially motivated.

The president, for his part, has continued to rail against Democrats, accusing them of stymying his immigration proposals.

Earlier today, for instance, the president tweeted that the Democrats' unwillingness to toughen up their stances on the border and on crime would doom them in November's midterm elections.

The president also reiterated his belief that the country is besieged by an "infestation" of MS-13 gang members (a claim that has, time and again, been easily disproven).

The president continued to level attacks against Democrats amid calls to abolish Immigrations and Customs Enforcement (ICE), whose agents have carried out the president's orders, exacerbating a humanitarian crisis along the U.S.-Mexico border.