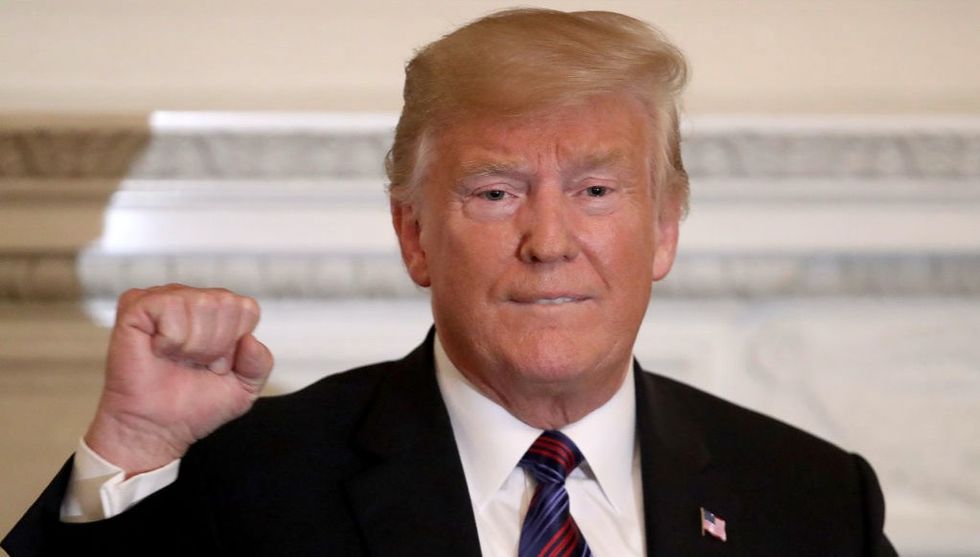 President Donald Trump spends much of his time and energy on public adoration. Likely a holdover from his years bolstering the Trump brand to maximize profits, his rallies are carefully crafted to ensure only supporters gain access or are allowed on camera.

The 45th President holds court on stage or at Mar-a-Lago or in private dinners at the White House with only those who revere him. Trump also loves tweeting numbers. If there is a number he can boast about on his Twitter feed, he can and will.

Although, not always accurately or honestly as the pushback on his recent post about the GDP rate, unemployment and  a 100 year record attests.

But one area where numbers consistently prove unkind to Trump are polls. Specifically polls assessing the public's approval of the job the President is doing. And in the latest poll from Quinnipiac University, Trump continues to fare poorly.

Only 38 percent of voters gave the President a favorable job approval rating versus 54 percent disapproval and 8 percent without an opinion. His approval dropped from 41 percent in mid August. However only 27 percent strongly approve of Trump's job performance—down from 30 percent in August—while 48 percent strongly disapprove—showing no change since August.

For deeper insight into voter perception of specific aspects of the President's character, a series of nine questions were asked by Quinnipiac. Respondents could answer yes, they felt Trump had the trait, or no, they felt he lacked the characteristic. Those with no opinion were classified as DK for "don't know."

On September 10, Quinnipiac asked, in this order:

Only the question of the President's mental stability failed to garner half of voters to either side of the question, with 48 percent feeling he was stable and 42 percent seeing him as unstable.

And Quinnipiac's poll gave Trump a few passing marks. 57 percent saw the President as a strong person and 51 percent considered him intelligent.

60 percent found the President dishonest as well as 60 percent who thought he did not share their values. And a full 65 percent said Trump is not level headed.

Quinnipiac saved the following questions—about overall satisfaction with the state of the United States as well as current issues facing the President—until after their voter assessment of the man himself.

An overwhelming 70 percent found the current economy good to excellent, with only 28 percent rating it not so good to poor.

In a bid to gauge voter response to recent events, Quinnipiac also asked poll respondents about the anonymous OpEd in The New York Times written by a senior White House official, Trump's Supreme Court nominee and ongoing targets of the President's ire—Jeff Sessions and Robert Mueller.

A question asking whether they view embattled Attorney General Jeff Sessions favorably or unfavorably yielded 17 percent favorable, 43 percent unfavorable with 33 percent answering they did not know enough about him. However only 29 percent said they would agree with Trump firing Sessions while 50 percent said Sessions should not be fired.

"As you may know, Special Counsel Robert Mueller was appointed to oversee the criminal investigation into any links or coordination between President Trump's campaign and the Russian government. Do you think that he is conducting a fair investigation into this matter, or not?"

"As you may know, there have been anonymously published allegations that senior advisors to President Trump work behind his back to stop him from making what these advisors believe are bad decisions. Do you believe these allegations are true, or not?"

"Do you think that the person who wrote these allegations did the right thing or the wrong thing by having them published anonymously?"

While 55 percent believed the claims in the OpEd true, only 39 percent felt the author did the right thing. 28 percent did not believe the claims and 51 percent said the choice to publish them anonymously was wrong.

The poor numbers and lack of confidence in the President and his character, bode ill for the upcoming midterm elections. The 2018 midterms are slated for Tuesday, November 6, 2018.