Pete Buttigieg Officiated a Last-Minute Wedding Ceremony Right Before the Couple Gave Birth and How Did You Spend Your Morning? 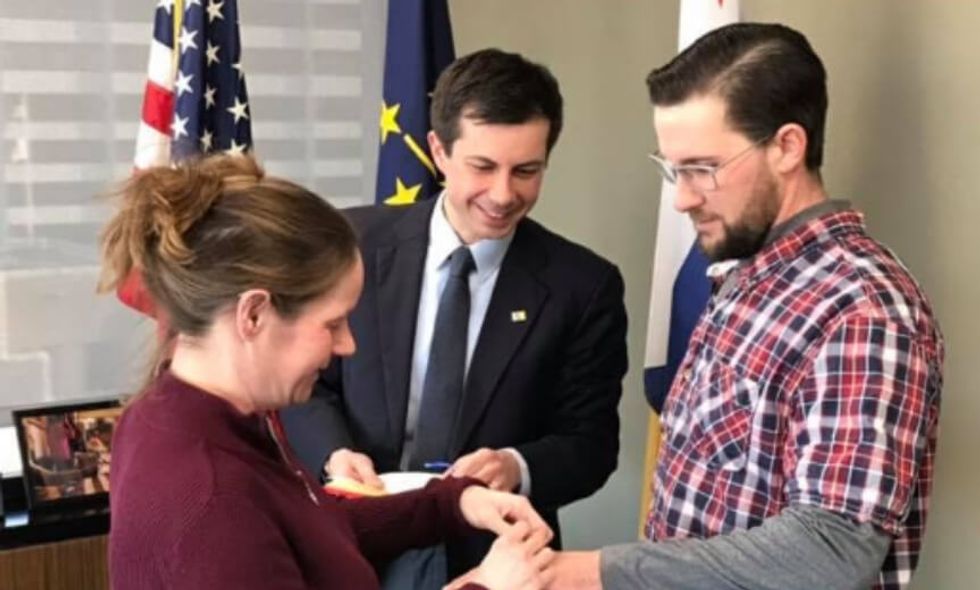 South Bend, Indiana Mayor and Democratic Presidential candidate Pete Buttigieg has had a great week. His campaign raised $7 million in its first quarter and the once-underdog is quickly becoming a contender to clench the nomination for the 2020 election.

But Buttigieg doesn't just want to lead the Union, he officiates unions as well.

In a now-viral Facebook post, Buttigieg shared his encounter with a couple at the mayor's office. They had a special request: that he marry them before the woman's C-section that morning.

"I corralled a few staff members as they were trickling into the office, to serve as witnesses, and filled out the paperwork. Their rings weren't ready, so one of my colleagues found a ribbon that would do the trick. A few minutes later, Gabe and Mary, newly married, left my office with just enough time to get to the hospital."

Later that day, the couple—Mary and Gabe Jones—gave birth to a baby girl.

"It's moments like this that I'll miss when my term as mayor comes to an end," Buttigieg added.

The internet may have shed some tears.

@PeteButtigieg, your kindness brings tears to my eyes. I’m just not used to politicians being so kind. https://t.co/A1Ro4JxyxV
— Mary Johnston (@Mary Johnston) 1554164568.0

And it solidified a persona Buttigieg is rapidly becoming known for.

Now, even more people are regarding Buttigieg as a stand-up guy.

@PeteButtigieg Anyone notice how when he speaks, the bickering stops and people just listen? It’s amazing.
— AbbyGayle (@AbbyGayle) 1554174859.0

He's even inspired some of the internet's most wholesome memes.

Buttigieg is expected to officially announce his candidacy in the coming weeks, and it's clear that may are ready to cast their vote for him.