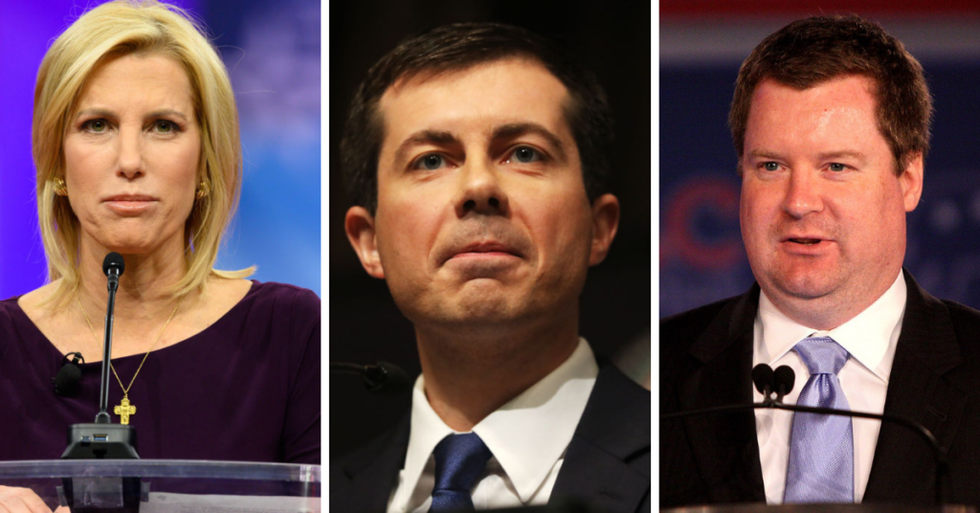 Pete Buttigieg, a prospective Democratic presidential candidate and the current mayor of South Bend, Indiana, is a devout Christian who has, from the start, been upfront about how much his faith has influenced his life. Buttigieg was baptized Roman Catholic, went to Catholic schools, and has cited several religious figures, including St. Augustine, as religious influences.

Despite this, right-wing figures have taken to dismissing Buttigieg as "not really Christian." This isn't because Buttigieg is gay, but because he's an Episcopalian.

"He says he’s a traditional Episcopalian, whatever that means these days,” Fox News personality Laura Ingraham said, describing Buttigieg as “but another creation of a media apparatus desperate to oust Trump.”

“If Buttigieg thinks evangelicals should be supporting him instead of Trump, he fundamentally does not understand the roots of Christianity. But then he is an Episcopalian, so he might not actually understand Christianity more than superficially.”

Asked by The Daily Beast to elaborate on his feelings about Buttigieg's faith, Erickson wrote:

“The Episcopal Church itself is no longer a Christian institution and those who remain will either walk into a Christian denomination or walk into atheism potentially with a helping of spirituality. The people remain behind [sic] are a bunch of rich, white people who want to feel good about themselves by feeling morally superior to their neighbors who really believe that whole ‘Jesus died for me’ stuff."

According to the Rev. Dr. Kelly Brown Douglas, dean of Episcopal Divinity School at Union Theological Seminary, the history of the division between the Episcopal Church's generally progressive denomination (one that, for example, ordains gay and lesbian bishops) and the more conservative Christian Right is "theological":

“The Episcopal Church faith tradition has been concerned with salvation as it talks about issues of social justice and issues of freedom—a movement toward ‘God’s Just Earth,’ so that the issues that really become central to our concern are issues of how one treats those who have been marginalized. ...

The very fact that Mayor Pete is a gay man and he professes to be Episcopalian, well, that would be the rub for evangelical Christians, because fundamentalists—and not all evangelicals, to be clear: fundamental evangelicals, the right-wing branch—they are not going to accept someone that claims to be Christian and also gay. We need to be clear as to what the rub is in this regard.”

This theological––and it seems ideological––split has opened up Buttigieg's detractors to criticism. Others have reaffirmed their support for Buttigieg.

On a day when Evangelicals are attacking @PeteButtigieg and #Episcopalians, I am especially proud to be an Episcopa… https://t.co/8UfEOyKANw
— Silas House (@Silas House) 1554750790.0

I never thought I would see the day when membership in the same church as George Washington, Franklin Roosevelt, Ge… https://t.co/gTMrAIrdUQ
— Eric Funston☩ (@Eric Funston☩) 1554905816.0

Buttigieg's spokesperson says Erickson's attacks––and by and large others of similar nature––are not worth responding to.

“We’ll let whatever that meltdown was speak for itself,” said Lis Smith, Buttigieg’s communications director. “The mayor has spoken extensively about his faith and how it guides him as a human being and elected official. It’s not surprising that this administration’s defenders are sensitive about being called out for their hypocrisy.”

Buttigieg has raised the ire of the Christian Right in recent days following his remarks about Vice President Mike Pence's attitude toward homosexuality.

It's well known that the ultra-conservative Pence, the former governor of Indiana, has come under fire for his ties to such groups as the socially conservative Family Research Council, which denounce homosexuality and bemoan what they characterize as "attacks" on "traditional" marriage. Pence has also faced heated criticism for his views on transgender rights and conversion therapy.

But Buttigieg, during a speech at the LGBTQ Victory Fund's annual brunch in Washington, says his marriage to teacher Chasten Glezman, has made him "a better human being."

"It has made me more compassionate, more understanding, more self-aware, more decent. My marriage to Chasten has made me a better man. And yes, Mr. Vice President, it has moved me closer to God," he said.

Buttigieg recalled that there was a time in his life when he wished he could have taken "a pill to make me straight," but said those feelings are long past him.

"Speaking only for myself, I can tell you that if me being gay was a choice, it was a choice that was made far, far above my pay grade," he said. "And that's the thing I wish the Mike Pences of the world would understand, that if you've got a problem with who I am, your problem is not with me. Your quarrel, sir, is with my creator."

In response, Ingraham took to Twitter, accusing Buttigieg of being "more sanctimonious and self-righteous" than most evangelicals she says she's met.

Earlier today, Second Lady Karen Pence also responded and surmised that Buttigieg's comments about her husband are helping him "get some notoriety."

“I think in our country we need to understand you shouldn’t be attacked for what your religious beliefs are and I think kids need to learn that at a young age that this is OK, what faith people have; we don’t attack them for their faith,” she said.