Trump Officials Who Prepped Trump for His Meeting With Kim Jong Un Admit They're Worried, For Exactly the Reason You Think 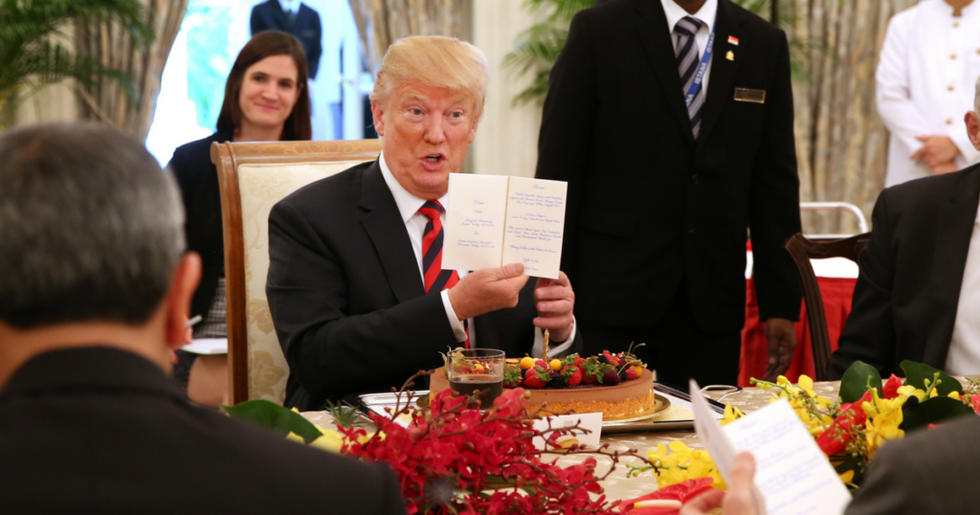 SINGAPORE, SINGAPORE - JUNE 11: In this handout provided by the Singapore's Ministry of Communications and Information (MCI) shows U.S. President Donald Trump (center L) with Singapore's Prime Minister Lee Hsien Loong (R) on June 11, 2018 in Singapore, Singapore. The historic meeting between U.S. President Donald Trump and North Korean leader Kim Jong-un has been scheduled in Singapore for June 12 as the world awaits the landmark summit in the Southeast Asian city-state. (Photo by Singapore's Ministry of Communications and Information (MCI)/via Getty Images)

But in spite of Trump's assurances that he is capable of making a deal with the reclusive North Korean leader, some officials close to the president are worried that his confidence may be his undoing.

Some of those who have prepared President Trump for dealing with Korea say they worry that he is so confident in hi… https://t.co/QbHdSbCmuI
— The New York Times (@The New York Times) 1528720142.0

According to the New York Times, sources who have been prepping Trump for tomorrow's historic meeting are concerned that the president's confidence has "allowed him to eschew detailed briefings on how Kim thinks about the world."

@nytimes The Donald never prepares, and when things don't go according to the script in head he gets mad, tells his… https://t.co/LDyjuTPN2f
— Lawrence Young (@Lawrence Young) 1528725009.0

Last week, Trump said that he had been "preparing for this moment" his entire life and that he would know "within a minute" whether or not Kim is serious about potentially ending his nuclear weapons program.

@nytimes So, by his negotiating skills as described, you mean bullying & intimidation tactics. That should go well with NK.
— eirroC (@eirroC) 1528721455.0

When asked how he would know if Kim ends up acting like an honest broker, Trump said it's "just my touch, my feel... it’s what I do," suggesting that instinct, rather than preparation, is the key to getting Kim to spearhead the denuclearization of the Korean Peninsula. Trump also said "attitude" is the key to success in North Korea.

Early Monday morning, Secretary of State Mike Pompeo said Trump is heading to the summit with "confidence and a positive attitude," and that the only outcome the United States will accept is full "denuclearization" of North Korea.

The stakes surrounding Tuesday's summit are enormous. North Korea's nuclear weapons program has been the country's single domestic priority for more than half a century, and their nuclear arsenal is the only bargaining chip Kim has as a means of getting what he wants.

Experts believe Kim may be seeking relief from decades of crippling sanctions from the West, however very few take seriously the idea that Kim will give up his nuclear weapons.

One major concern is that Kim may have already gotten what he wanted when Trump agreed to the summit. North Korea has long sought to be placed on equal footing with the United States and other western powers. By agreeing to meet Kim without asking for anything in return, Trump may have already overplayed his hand.

In what may be the Freudian slip of the week, Fox News referred to Trump and Kim as "two dictators" on Sunday.

“Chairman Kim once again clearly expressed his firm commitment to a complete denuclearization of the Korean Peninsula,” said South Korea’s president Moon Jae-In last month. “What is not so clear to him is how firmly he can trust the United States’ commitment to ending hostile relations and providing security guarantees for his government should it denuclearize.”

North Korea, despite being a hermit-like country that literally keeps its people in the dark, is expected to be extremely well-prepared for its meeting with the President of the United States.

"We shouldn't be fooled by our notion that North Korea is a hermit kingdom," said Wendy Sherman, a former senior State Department official who negotiated with North Korea during the Clinton administration. "We saw Kim Jong Un very ably manage the summit with (South Korean President) Moon Jae-In. He is prepared, he will do his homework."
Other former government officials warn that North Korea's habit of saying one thing and doing another makes Kim a uniquely difficult negotiating partner.
"Whether it is in their manual of negotiation or not, the North Koreans would have an annoying habit of agreeing to something, then coming back and not agreeing to what they had just agreed," said Christopher Hill, who was the Bush administrations chief negotiator with North Korea.
It should also be noted that there are no scientists specializing in nuclear weapons accompanying the president to the summit.
Trump's self-proclaimed dealmaking ability has never been tested like it will be with North Korea, and the public has its concerns.