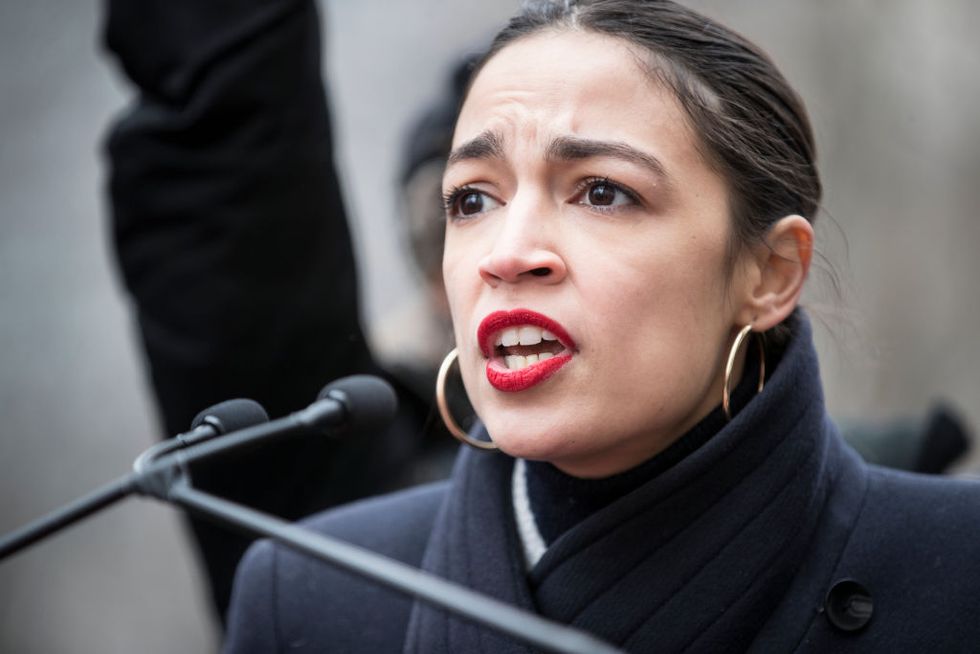 NEW YORK, NY - JANUARY 19: Alexandria Ocasio-Cortez Democratic of the 14th congressional district of the House Of Representatives addresses the crowd with a passionate speech to kick off the 3rd Annual Woman's March in the borough of Manhattan in NY on January 19, 2019, USA. Demonstrators holding signs behind her that say "End Proverty", "Immigration Rights" and "Green New Deal". The rally took place 2 years after the inauguration of President Donald Trump thousands gather to protest equal rights at the 2019 Women's March. (Photo by Ira L. Black/Corbis via Getty Images)

"What good are your thoughts and prayers when they don't keep the pews safe?" wrote the freshman Congresswoman, directly referencing the deadly shootings at a Charleston, South Carolina church, a Pittsburgh synagogue and a Sutherland Springs, Texas church.

Ocasio-Cortez clarified that “thoughts and prayers” is a reference to the NRA phrase “used to deflect conversation away from policy change during tragedies.” She added that she is an admirer of New Zealand Prime Minister Jacinda Ardern.

The NRA does not operate in New Zealand, which has some of the toughest gun laws on record, but Ocasio-Cortez's statement took direct aim at the organization and those who have vigorously condemned the attack while failing to address a spate of regular gun violence that happens stateside.

And although Ocasio-Cortez's comments received significant criticism from people accusing her of attempting to score political points, many concurred with her assessment that the phrase "thoughts and prayers" is reductive.

@AOC I understand completely what it is you are saying. I can hold all these people and tragedies close in thought… https://t.co/tCyaInzrTM
— Lily White Lillith (@Lily White Lillith) 1552658429.0

Ocasio-Cortez later called on communities to “come together, fight for each other and stand up for neighbors.”

“Isolation, dehumanizing stereotypes, hysterical conspiracy theories & hatred ultimately lead to the anarchy of violence,” she added. “We cannot stand for it.”

New Zealand officials have charged one man in his late 20s with murder. Police also found two explosive devices attached to a vehicle that they had stopped. The gunman published a 17-minute live video of the shooting as well as 74 pages of what authorities have referred to as a "manifesto" of white nationalist rhetoric in which he referred to immigrants as "invaders."

Two other armed suspects are in custody.

“It is clear that this can now only be described as a terrorist attack,” Ardern said.

Ardern later took to Twitter to remind citizens that "many of those affected" are members of the nation's migrant communities.

"New Zealand is their home – they are us," she said.

What has happened in Christchurch is an extraordinary act of unprecedented violence. It has no place in New Zealand… https://t.co/XOHF9hHe8H
— Jacinda Ardern (@Jacinda Ardern) 1552620782.0

The attack took place during Friday prayer, which Moustafa Farouk, a spokesman for the Federation of Islamic Associations of New Zealand, said made the violence especially "shocking." He said he never dreamed such an attack would take place in New Zealand.

"It’s one of the most peaceful countries in the world,” he said, adding that “this kind of random act of violence will affect that image.”