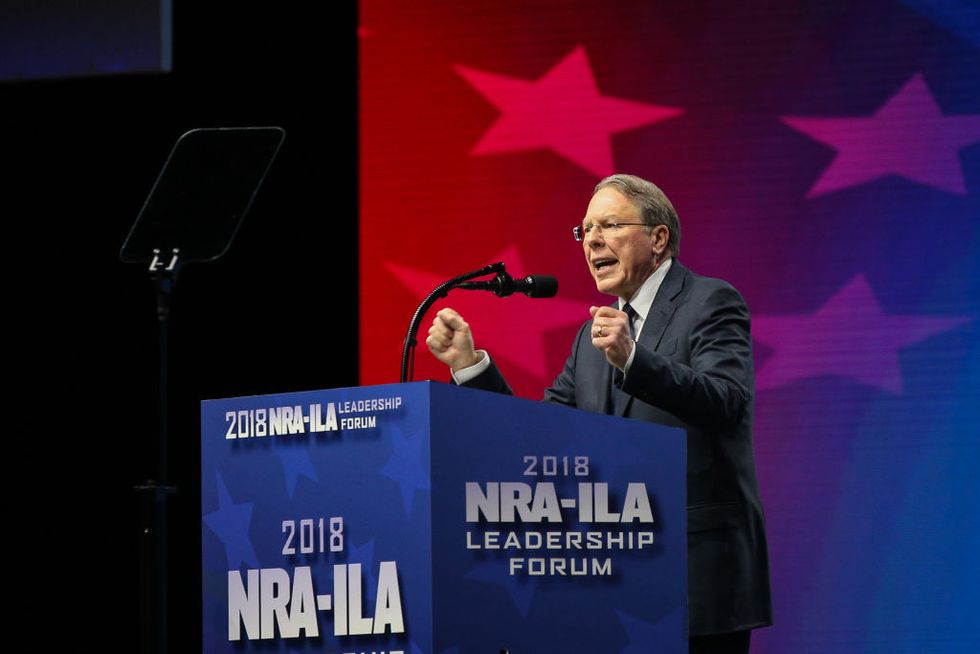 Wayne LaPierre, the head of the National Rifle Association, speaks during the NRA Annual Meeting & Exhibits at the Kay Bailey Hutchison Convention Center on May 4, 2018 in Dallas, Texas. (Photo by LOREN ELLIOTT/AFP/Getty Images)

The National Rifle Association on Tuesday posted a tweet attacking three Jewish Democratic donors in a last-minute push before the midterms, and social media is fighting back.

"Another billionaire is pumping unlimited money into electing anti-gun lawmakers," the organization wrote. "Notorious anti-gunner George Soros joins anti-gun billionaires Steyer and Bloomberg. There is no end to how much they’ll pay to push their elitist agenda on Americans."

The NRA's tweet comes just four days after a gunman charged into Tree of Life Synagogue in Pittsburgh, Pennsylvania and opened fire, killing 11 Jewish worshippers in the worst targeting of American Jews in history.

How many dogwhistles? Three people plus the term "elitist" which is code for Jews, so at least four.

Fred Guttenberg, whose daughter Jaime was murdered in Parkland, Florida in February, lauded "any billionaire helping to defeat the dangerous and horribly antisemitic NRA."

@NRA To any billionaire helping to defeat the dangerous and horribly anti semitic NRA, THANK YOU for what you do an… https://t.co/tPEygpo7EX
— Fred Guttenberg (@Fred Guttenberg) 1540947637.0

Guttenberg was not the only activist to blast the NRA for targeting Jews while the wounds of last weekend's shooting are still raw.

@NRA You suuuure you want to do the anti-Semitic thing as a gun-advocacy group right now? Is that your best move after last weekend?
— Sleeping Giants (@Sleeping Giants) 1540950466.0

Many people shared this same sentiment.

Stupid and evil? You decide.

Others noted that the NRA has become little more than a front for right-wing causes.

Money is speech, after all.

@NRA Did you really believe that Citizens United would only apply to Republican billionaires like the Mercers and Koch brothers?
— MC (@MC) 1540947963.0

A little more than a week ago, Soros, a Jewish Holocaust survivor and Democratic donor, received a pipe bomb in the mail from a radicalized supporter of President Donald Trump. Tom Steyer, a Jewish billionaire and supporter of liberal causes, was also sent an explosive device by the same culprit.

At least welve other high-profile Democrats were also targeted in the largest attempted mass-assassination in American history, and as many as 100 people were listed as potential targets.

All three men are major players among the moneyed liberal base. Those opposed to the NRA were glad to see these men refusing to back down.

It turns out funneling money into preventing gun violence is a winning cause.

@NRA How many more of our young people must be anti-gunned down in their prime, before their lives have even begun,… https://t.co/uXHJ9weRpD
— Alexandra Erin (@Alexandra Erin) 1540964798.0

Soros has given $15 million to Democrats this year, while Steyer has pledged $16 million in the final stretch of the midterms.

Also mentioned in the tweet is former New York City Mayor and possible 2020 Democratic presidential candidate Michael Bloomberg, who is also Jewish and who has donated $42 million to Democratic candidates in the 2018 midterm cycle.