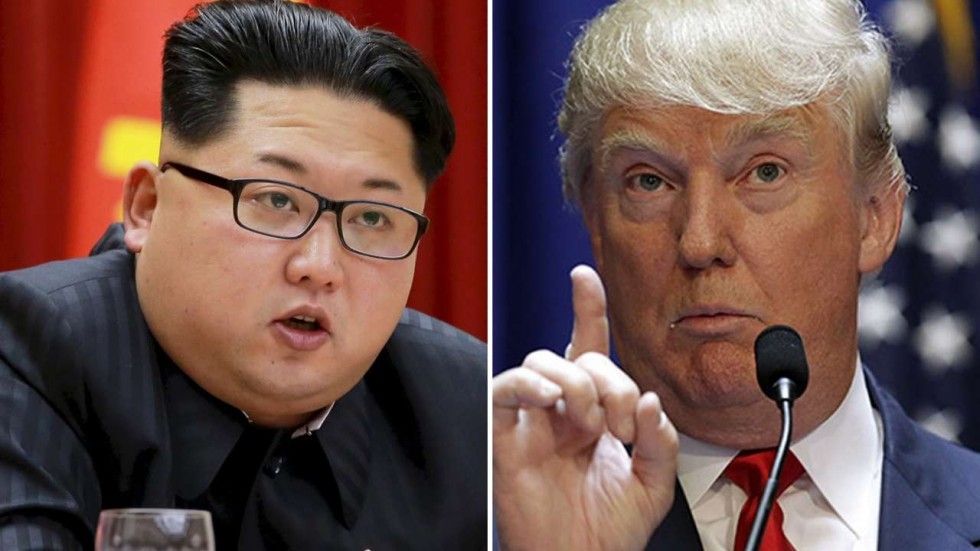 Ri Yong Ho, North Korea's foreign minister, warned that the country could test a powerful nuclear weapon over the Pacific Ocean in response to President Donald Trump's threats of military action. During a speech at the United Nations on Tuesday, Trump threatened to "totally destroy" North Korea if the United States were "forced to defend itself."

"This could probably mean the strongest hydrogen bomb test over the Pacific Ocean. Regarding which measures to take, I don't really know since it is what Kim Jong Un does," said Ri, who is in New York for the UN General Assembly.

"Far from making remarks of any persuasive power that can be viewed to be helpful to defusing tension, he made unprecedented rude nonsense one has never heard from any of his predecessors," Kim said. "A frightened dog barks louder." He added that North Korea "will consider with seriousness exercising of a corresponding, highest level of hard-line countermeasure in history... I will make the man holding the prerogative of the supreme command in the U.S. pay dearly for his speech."

The North Korean leader further pledged to "surely and definitely tame the mentally deranged U.S. dotard with fire," a word, according to Merriam-Webster, used to describe someone who is senile. The word "rose dramatically in lookups" after Kim Jong Un released his statement.

Trump responded to Kim's threats on Twitter earlier this morning.

Kim Jong Un of North Korea, who is obviously a madman who doesn't mind starving or killing his people, will be tested like never before!
— Donald J. Trump (@Donald J. Trump) 1506076082.0

As tensions continue to escalate, Japan's defense minister Itsunori Onodera said the country must prepare to defend itself in the event of a missile launch. "We cannot deny the possibility it may fly over our country," Onodera said yesterday, noting that Japan has been subject to two North Korean missile test flyovers in recent weeks. Meanwhile, France's Sports Minister Laura Flessel announced that the country's Winter Olympics team will not travel to the 2018 Games in South Korea if "our security cannot be assured."

President Trump announced yesterday he planned to sign an executive order that would impose sanctions on individuals, companies and financial institutions that do business with North Korea. The sanctions are similar to ones which forced Iran to curb its nuclear program.

Here is the full statement published by KCNA on Friday morning:

Statement of Chairman of State Affairs Commission of DPRK

The full text of the statement reads:

The speech made by the U.S. president in his maiden address on the UN arena in the prevailing serious circumstances, in which the situation on the Korean peninsula has been rendered tense as never before and is inching closer to a touch-and-go state, is arousing worldwide concern.

Shaping the general idea of what he would say, I expected he would make stereo-typed, prepared remarks a little different from what he used to utter in his office on the spur of the moment as he had to speak on the world's biggest official diplomatic stage.

But, far from making remarks of any persuasive power that can be viewed to be helpful to defusing tension, he made unprecedented rude nonsense one has never heard from any of his predecessors.

I'd like to advise Trump to exercise prudence in selecting words and to be considerate of whom he speaks to when making a speech in front of the world.

The mentally deranged behavior of the U.S. president openly expressing on the UN arena the unethical will to “totally destroy” a sovereign state, beyond the boundary of threats of regime change or overturn of social system, makes even those with normal thinking faculty think about discretion and composure.

His remarks remind me of such words as “political layman” and “political heretic” which were in vogue in reference to Trump during his presidential election campaign.

After taking office Trump has rendered the world restless through threats and blackmail against all countries in the world. He is unfit to hold the prerogative of supreme command of a country, and he is surely a rogue and a gangster fond of playing with fire, rather than a politician.

His remarks which described the U.S. option through straightforward expression of his will have convinced me, rather than frightening or stopping me, that the path I chose is correct and that it is the one I have to follow to the last.

Now that Trump has denied the existence of and insulted me and my country in front of the eyes of the world and made the most ferocious declaration of a war in history that he would destroy the DPRK, we will consider with seriousness exercising of a corresponding, highest level of hard-line countermeasure in history.

Action is the best option in treating the dotard who, hard of hearing, is uttering only what he wants to say.

As a man representing the DPRK and on behalf of the dignity and honor of my state and people and on my own, I will make the man holding the prerogative of the supreme command in the U.S. pay dearly for his speech calling for totally destroying the DPRK.

This is not a rhetorical expression loved by Trump.

I am now thinking hard about what response he could have expected when he allowed such eccentric words to trip off his tongue.

Whatever Trump might have expected, he will face results beyond his expectation.

I will surely and definitely tame the mentally deranged U.S. dotard with fire.

Here is Trump's full speech at the United Nations: