North Korea's Review of Trump's State of the Union Just Leaked, and It's Pretty Accurate 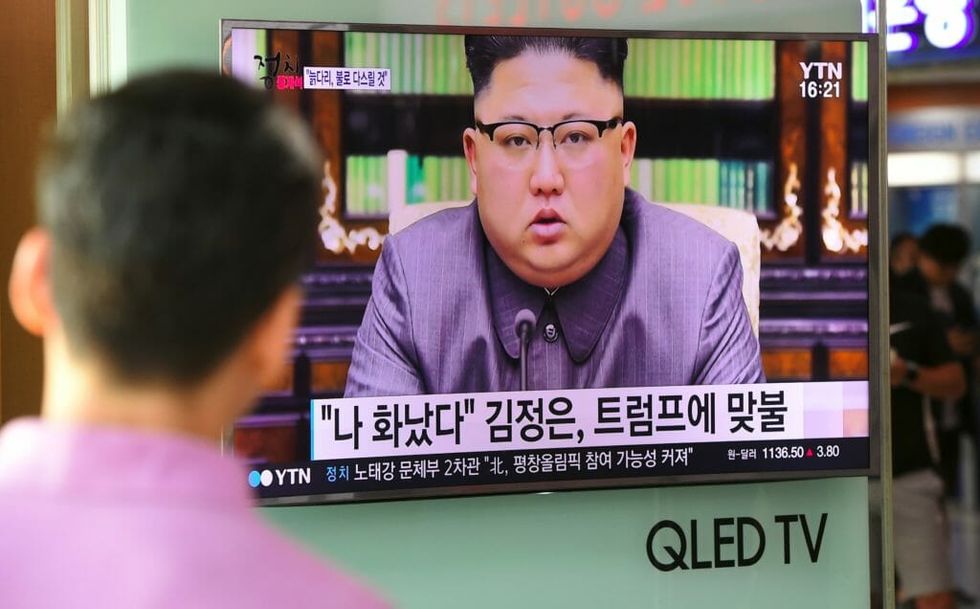 A man watches a television news screen showing a picture of North Korean leader Kim Jong-Un delivering a statement in Pyongyang, at a railway station in Seoul on September 22, 2017. US President Donald Trump is "mentally deranged" and will "pay dearly" for his threat to destroy North Korea, Kim Jong-Un said on September 22, as his foreign minister hinted the regime may explode a hydrogen bomb over the Pacific Ocean. (JUNG YEON-JE/AFP/Getty Images)

President Donald Trump's State of the Union was met with some harsh criticism here at home, but all the way across the world, his speech was described as the "height of arrogance" and "arbitrariness" by North Korean state media.

In his annual address to the nation, Trump said of North Korea, "no regime has oppressed its own citizens more totally or brutally than the cruel dictatorship in North Korea. North Korea's reckless pursuit of nuclear missiles could very soon threaten our homeland," he said. "We need only look at the depraved character of the North Korean regime to understand the nature of the nuclear threat it could pose to America and our allies."

Trump, no stranger to self-aggrandizement, claimed his SOTU speech was the most watched of all time... which of course it wasn't.

"Trump described last year as a year fully recorded with incredible progress and extraordinary success," a spokesman for the North Korean Foreign Ministry was quoted as saying. "This is indeed the height of Trump-style arrogance, arbitrariness and self-conceit."

North Korea's response touched on the growing nuclear tensions between itself and the United States.

"The whole world is deeply concerned, seeing as an omen of new disaster the address of Trump who asserted 'America First' and 'unmatched power' based on nuclear weapons while forcing other countries to submit themselves to the U.S. chauvinistic interest," said North Korean state media.

In January, Trump taunted the rogue nation on Twitter, claiming he had a 'bigger nuclear button' than North Korean Dictator, Kim Jong-Un.

"Our self-reliant defense capability with the nuclear force as its backbone will, however, completely deter Trump and his lackeys from showing off on the Korean peninsula," North Korea said. "If Trump does not get rid of his anachronistic and dogmatic way of thinking, it will only bring about the consequence of further endangering security and future of the United States."

North Korea's comments come at a time when a majority of Americans distrust Trump with the American nuclear launch codes.

Back in the United States, Congressman Joe P. Kennedy III (D-MA) delivered the democratic response to the president's address.

The Democratic response to President Trump's State of the Union from CNBC.