There's a Photo the White House Doesn't Want You to See, Especially After the Parkland Shooting 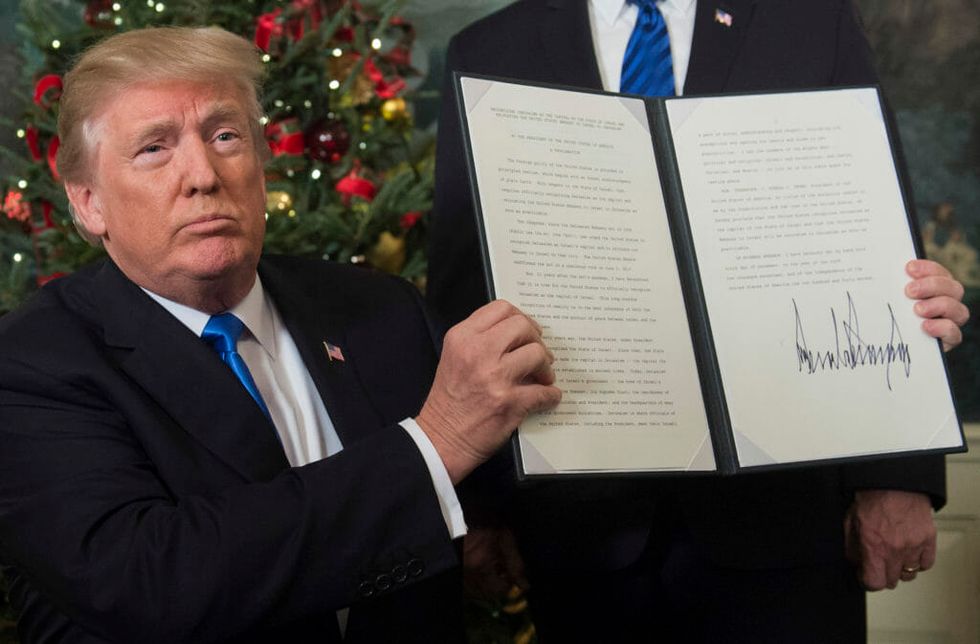 TOPSHOT - US President Donald Trump holds up a signed proclamation after he delivered a statement on Jerusalem from the Diplomatic Reception Room of the White House in Washington, DC on December 6, 2017. President Donald Trump on Wednesday recognized the disputed city of Jerusalem as Israel's capital -- a historic decision that overturns decades of US policy and risks triggering a fresh spasm of violence in the Middle East."I have determined that it is time to officially recognize Jerusalem as the capital of Israel," Trump said from the White House."It's the right thing to do." / AFP PHOTO / SAUL LOEB (Photo credit should read SAUL LOEB/AFP/Getty Images)

In the wake of a Valentine's Day high school shooting at Marjory Stoneman Douglas High School in Parkland, Florida, which left 17 dead and 14 more injured, the White House is yet again refusing to release photos of the president signing HJ Resolution 40, which makes it easier for people with severe mental illness to buy guns.

"We don't plan to release the picture at this time," White House Press Secretary Sarah Huckabee Sanders told CBS news, which had made a dozen attempts to obtain a picture of Trump signing the bill into law.

The president's chutzpah here is really something to behold.

Following the Parkland massacre, Trump actually had the gall to blame survivors and their families for the attack. "So many signs that the Florida shooter was mentally disturbed, even expelled from school for bad and erratic behavior. Neighbors and classmates knew he was a big problem. Must always report such instances to authorities, again and again!" the president Tweeted Thursday morning.

So many signs that the Florida shooter was mentally disturbed, even expelled from school for bad and erratic behavi… https://t.co/3mSYrtTng6
— Donald J. Trump (@Donald J. Trump) 1518696761.0

Trump's attempt at compassion and leadership also tanked in his address to the nation following the shooting, in which he never once mentioned guns or gun control. There were plenty of references to the default response of  "thoughts and prayers," which is what elected officials like to offer instead of any meaningful action.

The Parkland shooter was reported to have had mental issues, and had ties to white supremacist groups. The shooting could have been prevented had stronger background checks been in place.

HJR 40 reverses former President Barack Obama's policy that "directed the Social Security Administration to update the FBI’s national instant background check database with the names of disability recipients with severe mental disorders such as schizophrenia and severe anxiety," reported Second Nexus. The National Rifle Association lobbied heavily for HJR 40, describing Obama's policy as a “last minute, back-door gun grab" that “would have stripped law-abiding Americans of their Second Amendment rights without due process.”