Ever since news broke that White House Chief of Staff John Kelly would step down at the end of 2018, people speculated who would replace him. Then when President Donald Trump's first choice for a replacement—Nick Ayers who currently serves as Vice President Mike Pence's Chief of Staff—announced he also would leave government service at the end of the year, people began throwing out suggestions.

Now the New York Daily News weighed in. Their front page for Tuesday featured a help wanted notice with some very specific qualifications.

They posted their front page to Twitter Monday night. 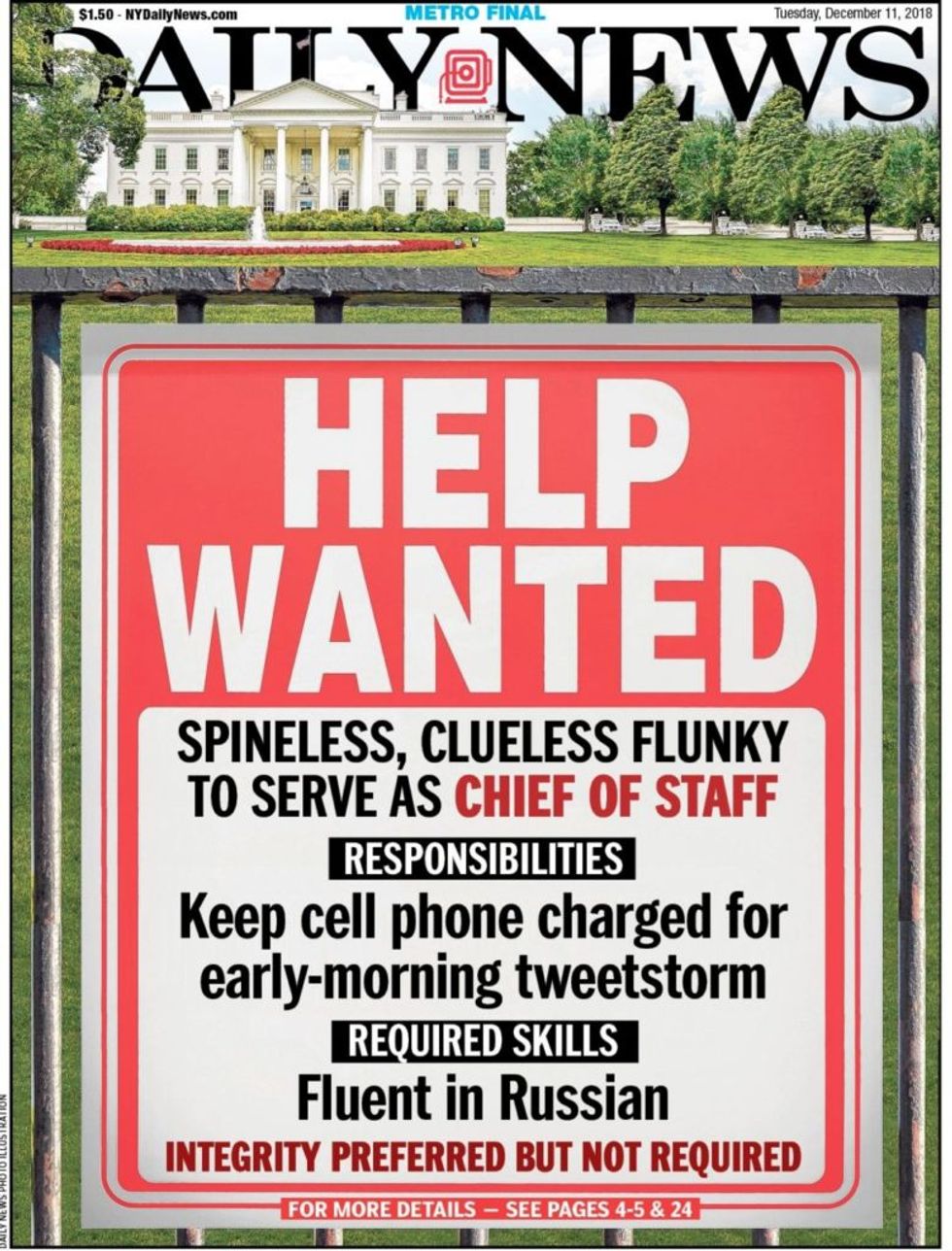 INTEGRITY PREFERRED BUT NOT REQUIRED"

People were thrilled to join in with the New York Daily News trolling Trump on Twitter.

Some referred to Trump's recent Twitter gaffe regarding the spelling of "smoking."

While others suggested people for the job.

While others just appreciated the humor.

The President has not commented on who he plans to appoint as his new Chief of Staff when John Kelly steps down.

It took a global pandemic and a national health crisis for the White House to temporarily restore daily press briefings after more than a year.

The purpose of the briefings is to update the public on the virus's spread and which potentially lifesaving measures are necessary for Americans to take in order to keep themselves and their families safe.

With Senator Bernie Sanders (D-VT) officially suspending his campaign on Wednesday, all signs are pointing to a showdown between President Donald Trump and former Vice President Joe Biden in November.

The pair's differing stances on how to curb the global pandemic that's resulted in a national health crisis in the United States are already highlighting just how much more effective—and levelheaded—a Biden presidency would be.

President Donald Trump's hatred of the late Republican Senator from Arizona, John McCain, was widely known even before McCain cast the decisive vote that saved the Affordable Care Act in 2017.

That hatred has only worsened since that vote, with Trump initially refusing to lower flags at half staff to honor him and even implying that McCain is in Hell.

Pastor and Liberty University President Jerry Falwell Jr. came under fire late last month when he ordered faculty to return to the university and gave students the option to return, despite the mounting health crisis in the United States.

Presidential counselor Kellyanne Conway may be one of President Donald Trump's most vocal defenders, but her husband—Republican lawyer George Conway—is decidedly not.

After months of speaking out against Trump on Twitter, Conway and three other prominent Republican strategists formed Project Lincoln late last year.

The World Health Organization (WHO) is responsible for providing guidance regarding international public health, so people around the world are looking to the WHO during this global pandemic.