Nancy Pelosi Smacked Down Rep. Matt Gaetz for His Tweet Threatening Michael Cohen Like the Boss She Is, and Gaetz Just Responded 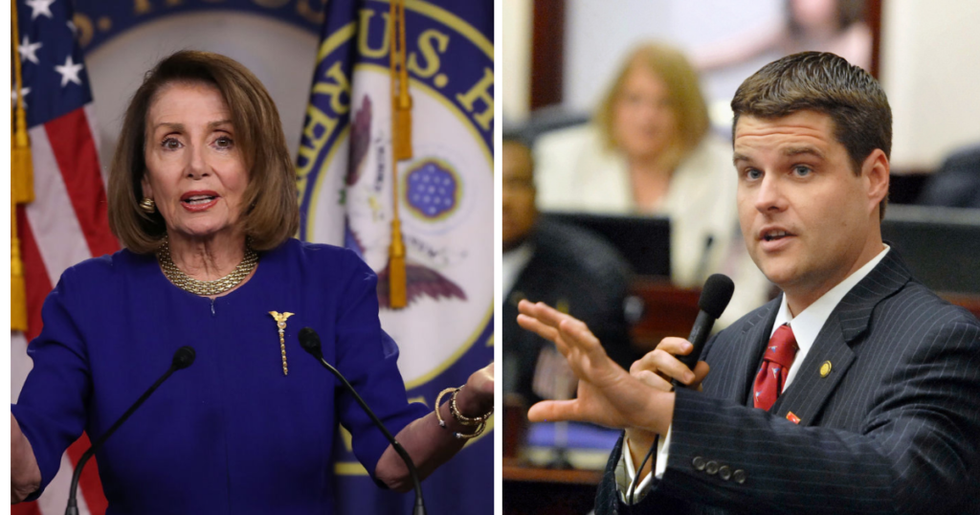 House Speaker Nancy Pelosi repudiated Representative Matt Gaetz (R-FL) after he tweeted what many perceived to be a threat against President Donald Trump's former attorney Michael Cohen ahead of Cohen's testimony before the House Oversight Committee.

"I encourage all members to be mindful that comments made on social media or in the press can adversely affect the ability of House Committees to obtain the truthful and complete information necessary to fulfill their duties," Pelosi said in a statement, noting that "The Committee on Ethics should vigilantly monitor these types of statements, which may not be protected by the speech or debate clause."

I encourage all Members to be mindful that comments made on social media or in the press can adversely affect the a… https://t.co/5WwXBYKDyz
— Nancy Pelosi (@Nancy Pelosi) 1551225567.0

"Speaker, I want to get the truth too," he said, insisting "it was NOT my intent to threaten, as some believe I did." Gaetz then apologized and said he would delete the tweet.

The tweet in question implied, as Second Nexus observed yesterday, "that Cohen’s alleged extramarital affairs would be exposed to his wife and father-in-law and that his wife would leave him after he reports to serve his prison sentence in two months."

Gaetz's response to Pelosi marks an about-face from the defense he gave news reporters yesterday.

"I think my tweet speaks for itself," said Gaetz, who doubled down against accusations of witness tampering.

"This isn't witness tampering, it's witness testing," he said, "and when people like Michael Cohen, who's about to go to prison for lying come before the Congress, there is an enhanced responsibility on the part of members of Congress to test that veracity, to test the truthfulness and character of the witness, and I think we ought to do it with great vigor."

But Gaetz's apology to Pelosi is meaningless, say his detractors, who suggested he should be charged with Congressional ethics violations.

Just seeing the Pelosi statement on Gaetz and his response that he was deleting his tweet on Cohen. Her mention of… https://t.co/9itYMUrQ4p
— Jonathan Allen (@Jonathan Allen) 1551251990.0

Since Pelosi took office, she has proven an effective roadblock against a mercurial president and as a check on his Republican allies.

Her message to Gaetz followed a statement from Lanny Davis, an attorney for Cohen, who referred to Gaetz's tweet as a "new low."

"We will not respond to Mr. Gaetz's despicable lies and personal smears, except to say we trust that his colleagues in the House, both Republicans and Democrats, will repudiate his words and his conduct," he said yesterday.

Cohen is due to testify before the House Oversight Committee today. An advance copy of his testimony leaked to the press yesterday. In it, Cohen calls Trump a “con man” and a “cheat” who knew his political adviser Roger Stone was communicating with Wikileaks:

He also says Trump implicitly told him to lie about all matters related to a Trump Tower construction project in Moscow that was underway during the 2016 presidential campaign:

“In conversations we had during the campaign, at the same time I was actively negotiating in Russia for him, he would look me in the eye and tell me there’s no business in Russia and then go out and lie to the American people by saying the same thing. In his way, he was telling me to lie. Mr. Trump did not directly tell me to lie to Congress. That’s not how he operates.”

Cohen will present several documents and other evidence to back up his claims. He will, for example, present copies of wire transfers and checks related to hush money payments made to adult film actress Stormy Daniels (whose real name is Stephanie Clifford), who alleged that she had an affair with President Trump and that Cohen had been instructed to keep her silent in a bid to influence the presidential campaign:

He asked me to pay off an adult film star with whom he had an affair, and to lie to his wife about it, which I did…I am giving the Committee today a copy of the $130,000 wire transfer from me to Ms. Clifford’s attorney during the closing days of the presidential campaign that was demanded by Ms. Clifford to maintain her silence about her affair with Mr. Trump. This is Exhibit 4 to my testimony.

“It’s laughable that anyone would take a convicted liar like Cohen at his word, and pathetic to see him given yet another opportunity to spread his lies,” she said.