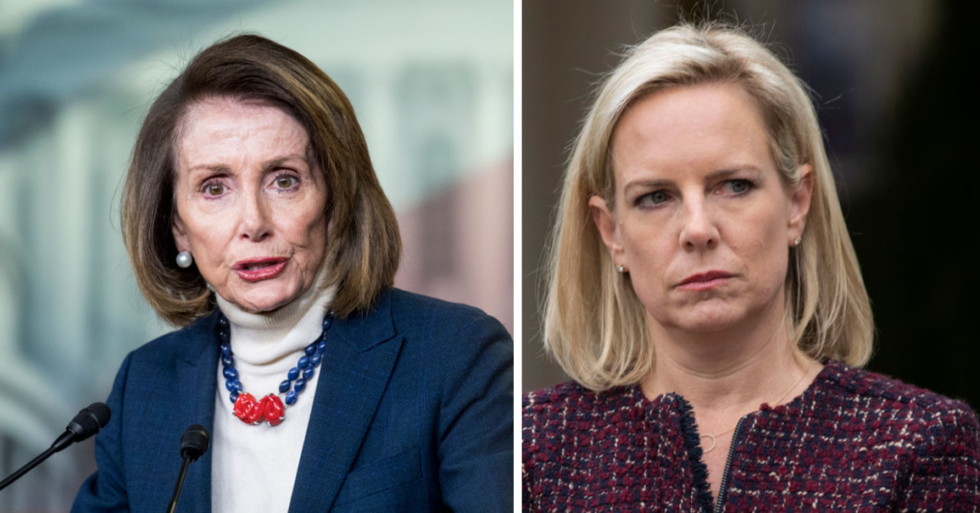 On Sunday afternoon, now-former Homeland Security Secretary Kirstjen Nielsen resigned from her post effective immediately. Reports say that President Donald Trump did not think her extreme enough. The policies championed by Nielsen on behalf of the President were reviled by many as inhumane and careless, so that Trump still didn't consider her to be hard-line enough concerned Americans everywhere—including House Speaker Nancy Pelosi (D-CA).

Pelosi says the fact that Nielsen "is reportedly resigning because she is not extreme enough for the White House’s liking is deeply alarming" in a statement released following President Donald Trump's announcement that Nielsen would no longer be working with his administration.

“The President’s dangerous and cruel anti-immigrant policies have only worsened the humanitarian suffering at the border and inflicted vast suffering on the families who have been torn apart.

“The Trump Administration’s increasingly toxic anti-immigrant policies were resoundingly rejected by the American people in the midterm election. America needs a Homeland Security Secretary who will respect the sanctity of families, honor our proud heritage as a nation of immigrants, and restore sanity to this Administration’s policies.”

Pelosi's statement was widely praised as others called for Nielsen to be held accountable.

If @TheDemocrats had not won the majority in the House and committee control, Nielsen would still be tearing apart… https://t.co/RbpEZ1EgGo
— Rocko Calavasi (@Rocko Calavasi) 1554691595.0

Normally, someone like Kristen Nielsen being shown the door after kidnapping a bunch of kids from their families wo… https://t.co/46d9RVfWAS
— Thomas Vought (@Thomas Vought) 1554688672.0

Kristen Nielsen will always be remembered for her unfathomable cruelty and her shameless dissembling in the name of… https://t.co/uoTlYlnakT
— Rabbi Shai Held (@Rabbi Shai Held) 1554677191.0

It is important to never forget what Kristjen Nielsen has done with regards to immigration and family separation, despite her resignation.
— The Realist (@The Realist) 1554678579.0

Pelosi's statement came just a day after President Trump announced that Nielsen will be replaced by Kevin McAleenan, the commissioner of Customs and Border Protection, who will lead DHS on an acting basis until a permanent replacement is chosen.

Secretary of Homeland Security Kirstjen Nielsen will be leaving her position, and I would like to thank her for her service....
— Donald J. Trump (@Donald J. Trump) 1554674523.0

Nielsen's resignation letter is firm; in it, she says she has "determined that it is the right time for me to step aside":

Despite our progress in reforming homeland security for a new age, I have determined that it is the right time for me to step aside. I hope that the next Secretary will have the support of Congress and the courts in fixing the laws which have impeded our ability to fully secure America's borders and which have contributed to discord in our nation's discourse. Our country and the men and women of DHS deserve to have all the tools and resources they need to execute the mission entrusted to them.

Additionally, Nielsen, whose often rocky tenure made her the subject of often heated criticism once she became the face of the president's "zero tolerance" family separation policy, expressed her belief that "our homeland is safer today than when I joined the Administration":

I can say with confidence our homeland is safer today than when I joined the Administration. We have taken unprecedented action to protect Americans. We have implemented historic efforts to defend our borders, combat illegal immigration, obstruct the inflow of drugs, and uphold our laws and values. We have responded decisively to record-breaking natural disasters and helped Americans rebuild. We have prevented the disruption of U.S. elections and guarded against foreign interference in our democracy. We have replaced complacency with consequences in cyberspace, we are holding digital intruders accountable, and we are stepping up our protection of American networks. We have thwarted terrorist plotting against our homeland and launched new efforts to block terrorists and criminals from reaching our shores. And we have ramped up security measures to make it harder for our enemies and adversaries to attack us, whether it is with drones, chemical and biological weapons, or through other means.

The president's announcement came shortly after he signaled he'd like immigration policy “to go in a tougher direction," one he's made repeated calls for in the wake of his declaration that migrants crossing the U.S.-Mexico border constitutes a national emergency.

Pelosi, for her part, has remained steadfast in her opposition to the president's national emergency declaration, particularly as he continues to ignite a debate about separation of powers.

Last week, Pelosi announced that the House has authorized a lawsuit against the president over his national emergency declaration to fund a wall along our nation’s southern border.

“The President’s sham emergency declaration and unlawful transfers of funds have undermined our democracy, contravening the vote of the bipartisan Congress, the will of the American people and the letter of the Constitution,” Pelosi said in an official statement.

“The President’s action clearly violates the Appropriations Clause by stealing from appropriated funds, an action that was not authorized by constitutional or statutory authority.  Congress, as Article I – the first branch, co-equal to the other branches – must reassert its exclusive responsibilities reserved by the text of the Constitution and protect our system of checks and balances.

The House will once again defend our Democracy and our Constitution, this time in the courts.  No one is above the law or the Constitution, not even the President.”

This is the latest development in the ongoing battle to halt the national emergency the president declared in February, and came just a day after the president insisted that “Congress must get together and immediately eliminate the loopholes at the border.” The president also threatened to shutter the U.S.-Mexico border, a move that would have a devastating economic impact nationwide.