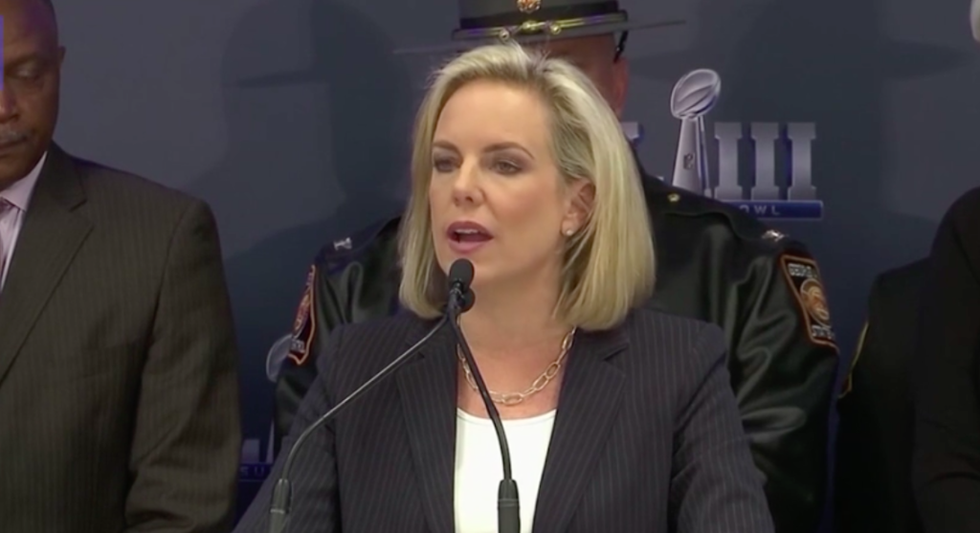 But despite the shutdown orchestrated by her boss, Nielsen wanted everyone to know DHS personnel were committed to the security of...

"Despite last month's lapse in funding, DHS employees are and have been committed to keeping our nation and Super Bowl LIII secure."

Nielsen also spoke of "minimizing inconvenience to our fans."

Secretary of Homeland Security Kirstjen Nielsen: "Despite last month's lapse in funding, DHS employees are and have… https://t.co/avByZQEuaD
— The Hill (@The Hill) 1548927060.0

While the remarks were made at a press conference for Super Bowl LIII, people questioned why this was a priority for the head of DHS, who is a cabinet-level official.

Does Nielsen think she is part of the NFL and their fans are her fans? Should relief efforts for the many DHS employees subjected to the 35-day shutdown of their agencies not be her priority while any other official could have gone to the Super Bowl press conference?

People were upset with Nielsen's priorities.

@thehill Kids in cages and other issues and we're going to keep the Super Bowl safe. Our priorities are a little askew don't you think DHS?
— Possum (@Possum) 1548927242.0

People questioned why the embattled head of DHS needed to go to Atlanta personally and address the press on behalf of the Super Bowl when her department just suffered through the longest shutdown in United States history.

Although people had theories.

Nielsen's DHS was ordered, along with the Department of Health and Human Services to reunite children DHS separated from their families as part of the Trump administration's southern border policy, however the agencies failed to do so in violation of multiple court orders.

Some also pointed out that as a "non-profit" the National Football League (NFL) pays no taxes.

@SecNielsen @NFL @MBStadium How much are they paying for this service from an organization they do not respect.
— Crude Hauler (@Crude Hauler) 1548886142.0

However only the NFL league office was once a non-profit and they voluntarily gave up the status in 2014 in the wake of a scandal involving their handling of domestic abuse within the NFL.

Others had theories on Nielsen's idea of "safety."

@thehill This women has no experience.trump put her in that position because she look good to him.the country is not safe under her watch.
— charles greene (@charles greene) 1548934780.0

Nielsen worked in the administration of George W. Bush before opening a consulting firm in 2008, with only Nielsen listed as an employee. Her firm, Sunesis Consulting, was awarded government contracts to "provide policy and legislation, technical writing, and organizational development" to the Federal Emergency Management Agency (FEMA).

Super Bowl LIII is slated for Sunday, February 3, 2019 between the Los Angeles Rams and New England Patriots. It is unclear if Nielsen will be in attendance.