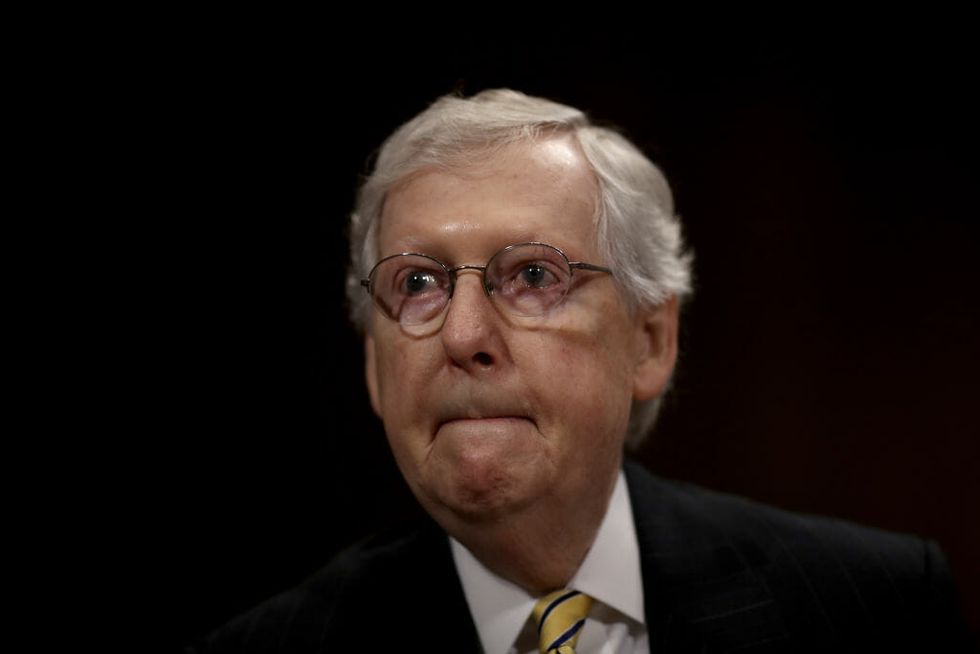 Senate Majority Leader Mitch McConnell's (R-KY) campaign is in hot water for tweeting a photo of tombstones featuring the names of McConnell's rivals only hours after a white supremacist murdered 22 people in El Paso, Texas.

The cardboard tombstones were erected at the 2019 Fancy Farm event, where McConnell made an appearance. They feature the names of McConnell's 2020 senate challenger Amy McGrath as well as Judge Merrick Garland, whom McConnell unconstitutionally stonewalled from ascending to the Supreme Court after former President Barack Obama appointed him to replace the late Justice Antonin Scalia on the Supreme Court.

Hours after the El Paso shooting, Mitch McConnell proudly tweeted this photo. I find it so troubling that our polit… https://t.co/iuGPYl7XtN
— Amy McGrath (@Amy McGrath) 1565021749.0

As did a score of other Americans.

I am appalled that in this divisive political climate—a climate where gun violence fueled by hate is on the rise—Mi… https://t.co/MjYkxTA8tj
— Gabrielle Giffords (@Gabrielle Giffords) 1565037770.0

After a weekend in which dozens of people were killed after being incited to violence by the leader of his party,… https://t.co/mEfnWouI9C
— Tim Turner (@Tim Turner) 1565030736.0

The entire nation is horrified by today's senseless violence in El Paso. Elaine's and my prayers go out to the vict… https://t.co/p4f78R0y5Y
— Leader McConnell (@Leader McConnell) 1564873140.0

Despite the House of Representatives passing a common sense gun reform bill months ago, McConnell has refused to bring it to the Senate floor for a vote.

In the wake of the shootings in El Paso and Dayton, Democratic lawmakers are pressuring McConnell to suspend the August recess and declare an emergency Senate session to put the legislation up for a vote.

This is a national crisis. Mitch McConnell needs to bring the Senate back from recess right now and hold votes on l… https://t.co/FyB3hNwUhk
— Cory Booker (@Cory Booker) 1564945534.0

Democrats, Republicans, Independents and even gun owners agree, ENOUGH is ENOUGH. It is time to stand up to the NRA… https://t.co/EDfSKuIQf6
— Bernie Sanders (@Bernie Sanders) 1564960008.0

With two mass shootings in America in less than 24 hours, thoughts and prayers are not enough. We need action. Th… https://t.co/QiAcJ5PjyI
— Hillary Clinton (@Hillary Clinton) 1564943934.0

You can donate to McConnell's challenger, veteran Amy McGrath here.