Mexico Just Clapped Back at Trump With Tariffs on U.S. Products, and Yep, They're Going Right After Trump Country 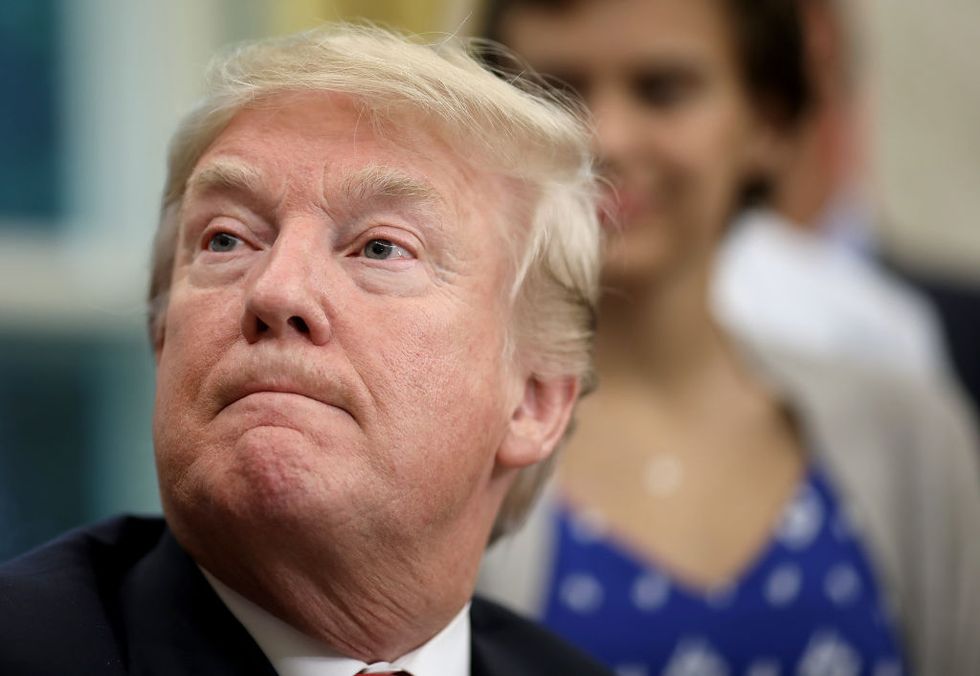 WASHINGTON, DC - JUNE 05: U.S. President Donald Trump takes part in a signing ceremony for the Childhood Cancer Survivorship, Treatment, Access, and Research Act of 2018 in the Oval Office of the White House June 5, 2018 in Washington, DC. The bill directs the National Institutes of Health to improve cancer treatment options for children, adolescents, and young adults with selected cancers. (Photo by Win McNamee/Getty Images)

Mexico has retaliated against the United States, announcing new tariffs against $3 billion worth of U.S. products including Iowa pork, Wisconsin cheese, and Kentucky bourbon. In doing so, Mexico made good on its threats to impose higher tariffs on the U.S. for its own tariffs on steel and aluminum.

The 20 percent tariff on U.S. pork also extends to potatoes and apples. Cheese and bourbon will face tariffs of 25 percent. Mexico is also putting 25 percent duties on a range of American steel products. The Washington Postnoted that "Mexico tailored the list of retaliatory duties to hit states governed by senior Republicans, such as the bourbon produced in the home state of Senate Majority Leader Mitch McConnell."

Mexico's government 🇲🇽 published the list of products imported from US that will have new tariffs, in retaliation t… https://t.co/aIhDAY8Ehp
— Jorge O. Armijo (@Jorge O. Armijo) 1528202932.0

The announcement inflames trade tensions between the two countries, complicating efforts to renegotiate the North American Free Trade Agreement. National Economic Council Director Larry Kudlow had said on “Fox & Friends" that the president does not intend to withdraw from NAFTA and will instead seek to restructure the accord with Mexico and Canada separately.

“His preference now — and he asked me to convey this — is to actually negotiate with Mexico and Canada separately,” Kudlow said. “He prefers bilateral negotiations.”

The United States, Mexico, and Canada agreed to NAFTA in the 1990s. Changes to NAFTA would need to be agreed by all sides before they could take effect.

Earlier this week, Second Nexus reported that Canada, which is the largest supplier of steel to the United States, added tariffs "covering $12.8 billion on U.S. imports including whiskey, orange juice, steel, aluminum and other products."

Mexico's tariffs, which largely affect states that President Donald Trump won handily in the 2016 election, are bound to have political implications as Republicans gear up for this year's midterm elections. This was not lost on many commentators who surmised how the announcement would affect the rest of the president's tenure.

"Trump's completely unnecessary trade war is hurting his base the most," wrote Nate Lerner, the Grassroots Director of Build the Wave.

"I don’t get why the EU, Mexico, Canada, et. all don’t just impose 100% retaliatory trade tariffs on all Trump trinkets… they must underestimate how corrupt and selfish Trump is—he’d end our tariffs in a heartbeat," noted tech entrepreneur William LeGate

The Democratic Coalition also weighed in, saying that the president's "asinine trade wars" could cause U.S. pork farmers to "lose $100,000,000 annually" after Mexico's announcement.

Iowa is the top pork-producing state in the United States; Mexico is its main export market by volume.

“We need trade and one of the things we’re concerned about is long-term implications that these trade issues will have on our partnerships with Mexico and Canada and other markets,” said Iowa Secretary of Agriculture Mike Naig, a Republican, adding, “If our customers around the world start going to other parts of the world for their supplies, that is a serious problem."

Jim Heimerl, an Ohio resident and the president of the U.S. National Pork Producers Council, said Mexico accounted for nearly 25 percent of all pork shipments last year. He noted that “a 20 percent tariff eliminates our ability to compete effectively in Mexico.”

“This is devastating to my family and pork-producing families across the United States,” he said.

In March, shortly before confirming that the U.S. would impose tariffs on aluminum and steel, President Trump attracted criticism for claiming that trade wars “are good, and easy to win.”

“When a country (USA) is losing many billions of dollars on trade with virtually every country it does business with, trade wars are good, and easy to win,” he wrote at the time. “Example, when we are down $100 billion with a certain country and they get cute, don’t trade anymore-we win big. It’s easy!”

The president appeared to ignore much of the controversy surrounding his announcement. Instead, he doubled down on his belief that “We must protect our country and our workers.”

Later, he seemed to offer justifications for his decision, writing: “When a country Taxes our products coming in at, say, 50%, and we Tax the same product coming into our country at ZERO, not fair or smart. We will soon be starting RECIPROCAL TAXES so that we will charge the same thing as they charge us. $800 Billion Trade Deficit-have no choice!”

According to two officials who spoke to NBC News on condition of anonymity, Trump’s “decision to launch a potential trade war was born out of anger at other simmering issues and the result of a broken internal process that has failed to deliver him consensus views that represent the best advice of his team.”

In the words of one official, the president became “unglued.”