She makes some valid points. 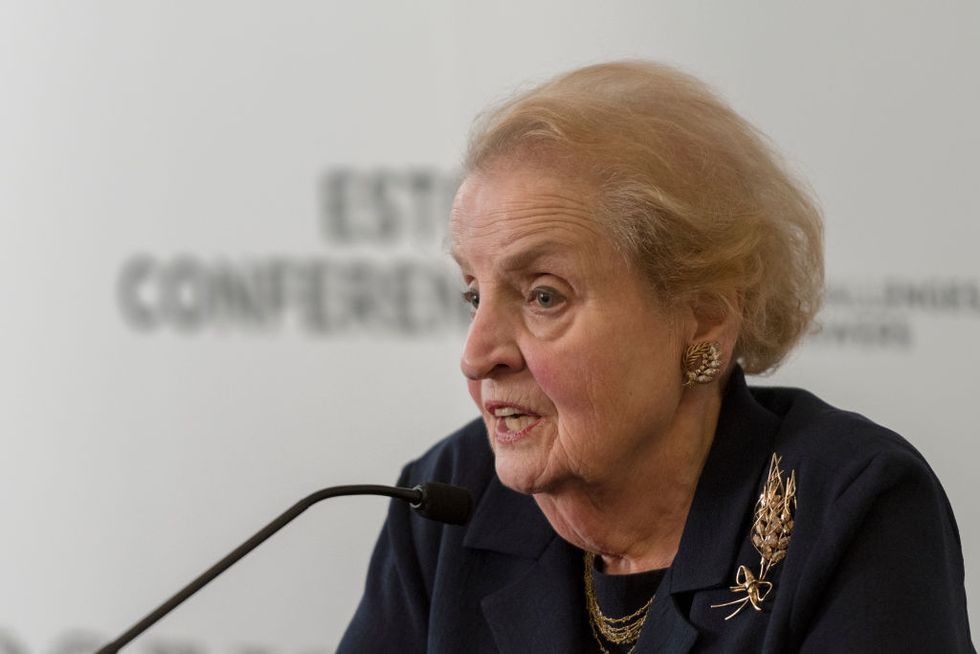 ESTORIL, PORTUGAL - MAY 31: Former United States Secretary of State Madeleine Albright meets the press at the end of her conference on "Challenges to Open Democracies" on May 31, 2017 in Estoril, Portugal. The Estoril Conferences are a global meeting that takes place every other year under the subject "Global Challenges, Local Answers". The event, under the high patronage of the President of Portugal, deals with globalization and political, economic, social and cultural changes occurring nowadays that promote and accelerate new international players, schisms, inter-connections and interdependences among peoples, countries and regions. (Photo by Horacio Villalobos - Corbis/Corbis via Getty Images)

Former Secretary of State Madeleine Albright penned a powerful Op-Ed in The New York Times in which she cites the modern rise of fascism and issues a warning about President Donald Trump.

In Opinion Madeleine Albright writes: "Fascism — and the tendencies that lead toward fascism — pose a more serious… https://t.co/KXBhoAlNGO
— The New York Times (@The New York Times) 1523014214.0

The former Clinton Secretary wrote that and the end of World War II, fascism appeared to be dead following the collapse of Adolf Hitler and Nazi Germany and the overthrow of Italian dictator Benito Mussolini. "Freedom was ascendant," she wrote, from 1945 through the early 1990's after the fall of the Berlin Wall.

On April 28, 1945 — 73 years ago — Italians hung the corpse of their former dictator Benito Mussolini upside down next to a gas station in Milan. Two days later, Adolf Hitler committed suicide in his bunker beneath the streets of war-ravaged Berlin. Fascism, it appeared, was dead.

To guard against a recurrence, the survivors of war and the Holocaust joined forces to create the United Nations, forge global financial institutions and — through the Universal Declaration of Human Rights — strengthen the rule of law. In 1989, the Berlin Wall came down and the honor roll of elected governments swelled not only in Central Europe, but also Latin America, Africa and Asia. Almost everywhere, it seemed, dictators were out and democrats were in. Freedom was ascendant.

@_VachelLindsay_ @nytimes Speaking as a former history teacher, Albright is quite right. I do not believe tRump is… https://t.co/waBQPZvIOR
— Stable Genius (@Stable Genius) 1523018177.0

Albright notes that democracy is facing serious challenges around the world: "terrorism, sectarian conflicts, vulnerable borders, rogue social media and the cynical schemes of ambitious men." Albright then warned that "fascism — and the tendencies that lead toward fascism — pose a more serious threat now than at any time since the end of World War II."

“Fascism — and the tendencies that lead toward fascism — pose a more serious threat now than at any time since the… https://t.co/rxdF9Zftqk
— Diane Askwyth (@Diane Askwyth) 1523020785.0

Albright states that fascism is evident in the rise of authoritarian states, particularly in Hungary, the Philippines, Poland and Turkey, where nationalism is once again surging and central power is being consolidated.

Russian Presiden Vladimir Putin just won another six-year term in an election wrought with fraud, China's Xi Jinping was deemed "president for life," and in Venezuela, "ruthless ideologue Nicolás Maduro" is set to be elected. In Syria, a civil war started by President Bashar Al-Assad eight years ago has claimed over half a million lives and displaced more than 12 million Syrians; which is more than half its population.

Albright then says that the biggest danger is the United States under the rule of Donald Trump. "Meanwhile, the possibility that fascism will be accorded a fresh chance to strut around the world stage is enhanced by the volatile presidency of Donald Trump," she wrote.

If freedom is to prevail over the many challenges to it, American leadership is urgently required. This was among the indelible lessons of the 20th century. But by what he has said, done and failed to do, Mr. Trump has steadily diminished America’s positive clout in global councils.

Albright then accuses Trump of isolating the United States, and that his tolerance and apparent admiration for dictatorial strong-men are enabling autocrats to subvert democracy.

Instead of standing up for the values of a free society, his oft-vented scorn for democracy’s building blocks has strengthened the hands of dictators. No longer need they fear United States criticism regarding human rights or civil liberties. On the contrary, they can and do point to Trump’s own words to justify their repressive actions.

Trump's autocratic tendencies, which including attacking the judiciary and law enforcement, saying and encouraging racist behavior, and referring to his critics as traitors are all markers of a dangerous slide into fascism, Albright writes.

Overseas, rather than stand up to bullies, Mr. Trump appears to like bullies, and they are delighted to have him represent the American brand. If one were to draft a script chronicling fascism’s resurrection, the abdication of America’s moral leadership would make a credible first scene.

His policy toward North Korea changes by the day and might quickly return to saber-rattling should Pyongyang prove stubborn before or during talks. His threat to withdraw from the 2015 Iran nuclear agreement could unravel a pact that has made the world safer and could undermine America’s reputation for trustworthiness at a critical moment. His support of protectionist tariffs invites retaliation from major trading partners — creating unnecessary conflicts and putting at risk millions of export-dependent jobs. The recent purge of his national security team raises new questions about the quality of advice he will receive. John Bolton starts work in the White House on Monday.

Albright's advice to Americans, and to individuals who value freedom around the world, starts with demanding a free press. We must also never forget that "no one, not even the president, is above the law." And, perhaps most importantly, get out the vote. Encourage participation in democracy and defend education.

I’m 80 years old, but I can still be inspired when I see young people coming together to demand the right to study without having to wear a flak jacket.

Taking a jab at Trump's "Make America Great Again" slogan, Albright says that we need to reflect on the "definition of greatness."

We should also reflect on the definition of greatness. Can a nation merit that label by aligning itself with dictators and autocrats, ignoring human rights, declaring open season on the environment, and disdaining the use of diplomacy at a time when virtually every serious problem requires international cooperation?

Albright concludes by opining that our country is at its best when people of diverse backgrounds work together for the common good and that is isn't how much marble we have in hotel lobbies, nor "Soviet-style military parades," that make America great.

To me, greatness goes a little deeper than how much marble we put in our hotel lobbies and whether we have a Soviet-style military parade. America at its best is a place where people from a multitude of backgrounds work together to safeguard the rights and enrich the lives of all. That’s the example we have always aspired to set and the model people around the world hunger to see. And no politician, not even one in the Oval Office, should be allowed to tarnish that dream.