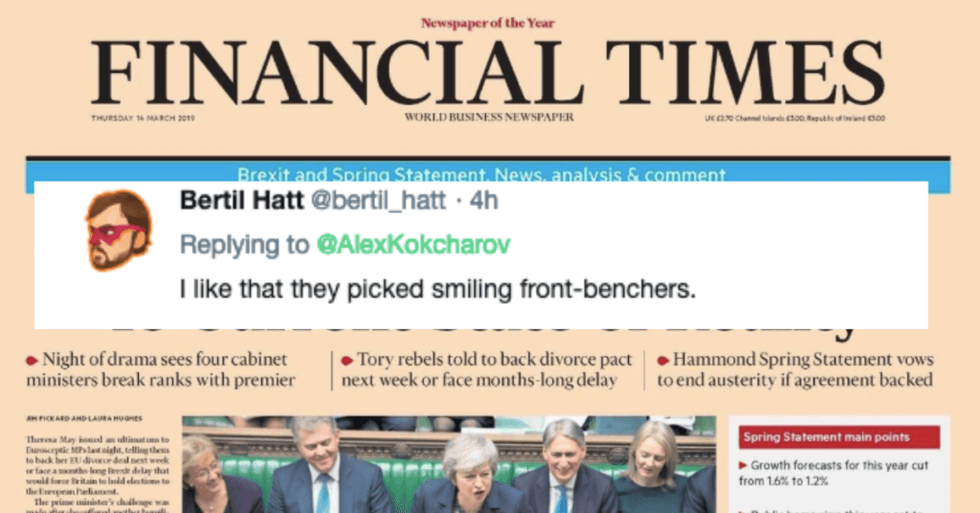 On March 14, 2019, in response to the uncertainty in the air surrounding whether Britain would actually kick off Brexit and officially break away from the European Union, someone created a Financial Times gag headline that serves as a rather biting commentary on our time.

"This is brilliant," he wrote, and others concurred.

@AlexKokcharov @KevinMKruse A nation that has comprehensively shown itself to be May's Fools has no time for April Fools?
— Warren Terra (@Warren Terra) 1554118263.0

@AlexKokcharov April Fool’s Day to be made permanent because of the current reality.
— Stephen Davis (@Stephen Davis) 1554144570.0

This is the actual headline from March 14.

The resurfaced headline comes as British MPs are voting on four Brexit alternatives in a bid to end the political deadlock. The United Kingdom is currently set to drop out of the EU in ten days’ time unless lawmakers reach a deal on the draft Withdrawal Agreement between the UK and the EU.

Downing Street announced that Prime Minister Theresa May still believes that a snap election is not in the national interest, but according to a top minister who spoke to The Independent, it's not quite that simple.

“Nobody actually wants an election. No one," he said. "But the real issue for many MPs in my party who still oppose the prime minister’s deal is that now is the time that they are going to have to decide – do they want Brexit to happen or not?”

A snap election becomes all the more possible if the Commons refuses to back May’s deal, a deal that's now on its fourth attempt to pass. In recent weeks, May committed to stepping down as Prime Minister if Parliament passed her Brexit deal.

But lawmakers are divided and prognosticators outside of Parliament say a general election is imminent. Conservative MP Richard Drax, a hardline Brexiteer, walked back his support yesterday, saying he "made the wrong call."

Meanwhile, in the United States, the political climate has continued to go haywire as President Donald Trump continues to insist that he is the victim of a political ploy orchestrated by Democrats.

No matter what information is given to the crazed Democrats from the No Collusion Mueller Report, it will never be… https://t.co/SuhhoTVwQ2
— Donald J. Trump (@Donald J. Trump) 1554129794.0

The president's comments come as Democrats prepare to authorize a subpoena this week to obtain the full, unredacted copy of the Mueller report from Special Counsel Robert Mueller himself, as well as Mueller's underlying evidence.

The report, according to a letter penned by Attorney General William Barr on March 22, found insufficient evidence that President Trump or members of his campaign “conspired or coordinated with the Russian government in its election interference activities,” an announcement that has prompted the president to proclaim victory over his opponents although the full report and its contents have still not been released to the public.

House Judiciary Chairman Jerry Nadler has scheduled the subpoena markup one day after the April 2 deadline Democrats set for Barr to provide the full Mueller report and its underlying evidence to Congress.

"We require the report, first, because Congress, not the attorney general, has a duty under the Constitution to determine whether wrongdoing has occurred. The special counsel declined to make a 'traditional prosecutorial judgment' on the question of obstruction, but it is not the attorney general's job to step in and substitute his judgment for the special counsel's."