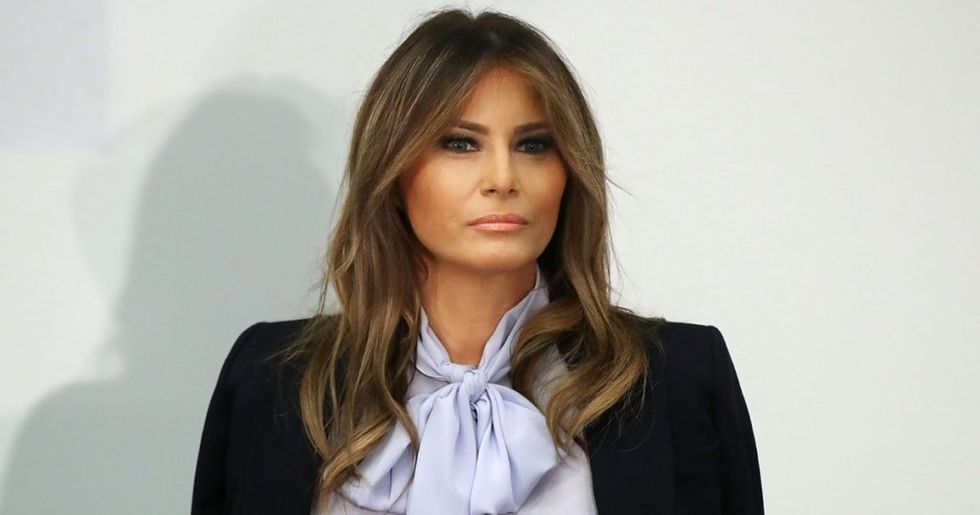 As the mystery continues to grow over who wrote the now infamous New York Times op-ed about President Donald Trump's chaotic White House, First Lady Melania Trump offered her own thoughts on the editorial Thursday afternoon.

CNN's Kate Bennett asked Mrs. Trump for her reaction to the anonymously-penned op-ed, which White House aides have blamed for putting the president in a "volcanic" mood.

"Freedom of speech is an important pillar of our nation's founding principles and a free press is important to our democracy," Mrs. Trump told CNN in a statement Thursday. "The press should be fair, unbiased and responsible."

The First Lady blasted the Times for publishing an editorial piece of such magnitude without citing the author.

"Unidentified sources have become the majority of the voices people hear about in today's news. People with no names are writing our nation's history," the First Lady said. "Words are important, and accusations can lead to severe consequences."

The president has long derided anonymous and confidential sources as "fake news," despite his own history of disguising his own identity when speaking to the press. Mrs. Trump, in her response, appeared to parrot her husband's frustrations.

"If a person is bold enough to accuse people of negative actions," Mrs. Trump added, "they have a responsibility to publicly stand by their words and people have the right to be able to defend themselves."

The First Lady's statement concluded with a message to the editorial's author, whoever he or she may be.

To the writer of the op-ed -- you are not protecting this country, you are sabotaging it with your cowardly actions.

Mrs. Trump didn't deny what the op-ed was saying, however.

@KateBennett_DC @FLOTUS @CNN Melania the birther perpetuator, sure. As soon as she settles up her source of confid… https://t.co/XUxBPlbWzH
— Cucurbita pepo (@Cucurbita pepo) 1536251788.0

@FLOTUS Your statement concerning the oped was read by Angela Mitchell. Let me ask you: who was your source when yo… https://t.co/XTDEm0Os80
— gloria blount (@gloria blount) 1536251789.0

@KateBennett_DC @FLOTUS @CNN Did you ask her about this person using anonymous sources to sabotage our last @potus… https://t.co/3emlWENSgw
— RRTCL (@RRTCL) 1536253616.0

Why isn't the First Lady holding the president to this standard, considering his own pattern of using pseudonyms, such as John Barron or David Dennison?

Perhaps it was Stephanie Graham, Mrs. Trump's spokeswoman who was fired earlier this year.

Maybe it was written by "another anonymous source."

Others joked that it was Michelle Obama who wrote the statement.

Many people, however, are simply exasperated.

Anonymous sources are an essential tool for the free press and are relied upon for holding truth to power.