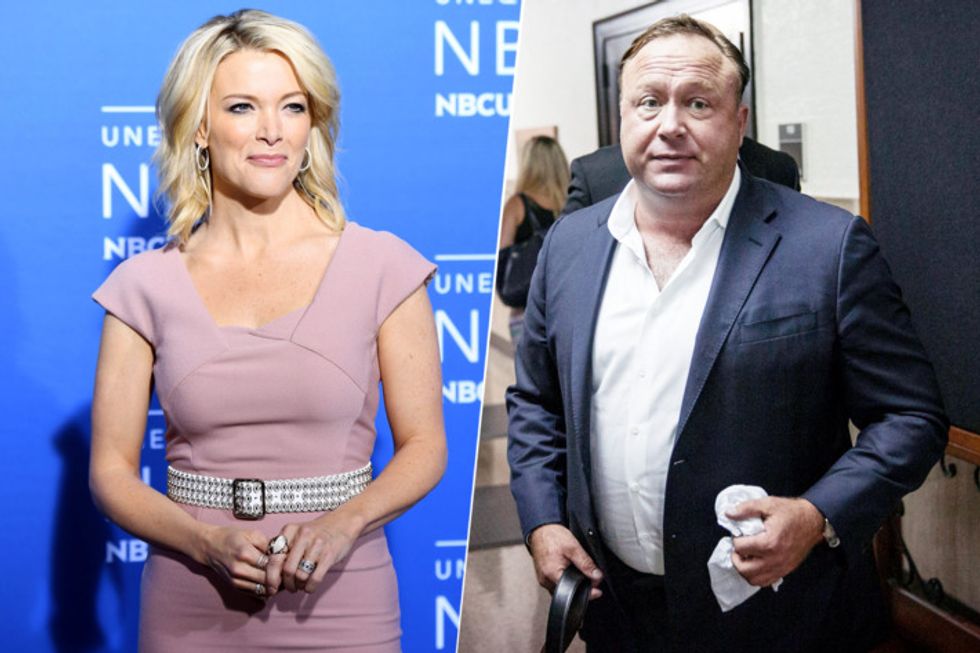 Megyn Kelly's interview with conspiracy theorist and Infowars host Alex Jones doesn't air until Sunday, but she's already had to contend with backlash. J.P. Morgan Chase has decided to temporarily pull its advertising from NBC over the interview. The bank has asked for all local TV and digital ads to be pulled from the network's news programming until after the interview airs.

As an advertiser, I'm repulsed that @megynkelly would give a second of airtime to someone who says Sandy Hook and A… https://t.co/wwuUPe1kzA
— Kristin Lemkau (@Kristin Lemkau) 1497266385.0

Jones has received criticism for promoting unsubstantiated, often bizarre conspiracy theories, including that the 2012 Sandy Hook Elementary Shooting in Newton, Connecticut, which resulted in the deaths of 20 children and several adults, was a hoax. President Donald Trump counts Jones among his inner circle and spoke to Jones personally days after his election win to thank him for his support. Jones has also reinforced the president's belief that millions of votes were cast illegally, ironically casting doubt upon the legitimacy of the election he supposedly won.

Kelly defended her decision to interview Jones, pointing to his close relationship with the president.

Kelly's reasoning was met with derision.

@megynkelly @RealAlexJones As if Alex Jones hasn't been in the spotlight for years. Turn your light off and let him… https://t.co/j5TZQ8xq9H
— Shannon Watts (@Shannon Watts) 1497235118.0

Some organizations, including those supported by those personally affected by the Sandy Hook shooting, have also spoken out.

Kelly will no longer host the Promise Champions Gala, an annual event for the Sandy Hook Promise Foundation, a nonprofit gun violence prevention group founded by family members of some of the Sandy Hook shooting victims. “Sandy Hook Promise cannot support the decision by Megyn or NBC to give any form of voice or platform to Alex Jones and have asked Megyn Kelly to step down as our Promise Champion Gala host,” Nicole Hockley, co-founder and managing director of the organization, said in a statement. “It is our hope that Megyn and NBC reconsider and not broadcast this interview."

Even Jones himself has publicly questioned the decision to air the interview, taking to Twitter with a 41-minute video in which he criticized both Kelly and NBC.

“Megyn Kelly lied to me several weeks before she came here, and she said the interview was not going to be about Sandy Hook and the mass shooting there,” he said in the video. He added that while he believes children died during the shooting, he felt compelled to play "devil's advocate" once his listeners expressed doubt.