Mazie Hirono Just Said What We Were All Thinking About William Barr Directly to His Face, and We Can't Stop Watching it 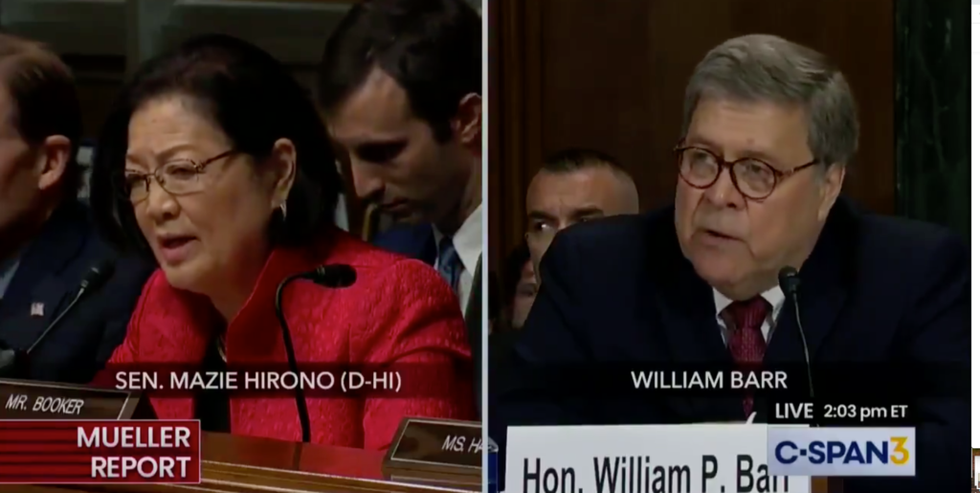 One of the highlights of the lengthy hearing was Senator Mazie Hirono (D-HI) grilling Barr for prioritizing the President over the justice system as a whole.

"Mr. Barr, now the American people know that you are no different from Rudy Giuliani or Kellyanne Conway or any of the other people who sacrificed their once decent reputation for the grifter and liar who sits in the Oval Office...Being Attorney General of the United States is a sacred trust. You have betrayed that trust, America deserves better. You should resign."

Hirono: Mr. Attorney General, give us some credit for knowing what the hell is really going on around here with you… https://t.co/E9OqZBFmqU
— Amee Vanderpool (@Amee Vanderpool) 1556734431.0

While Senator Graham was salty, many Americans were in full agreement with Hirono.

And they were none too pleased with Graham.

@girlsreallyrule That fact that facing an accurate accounting of your actions is considered slander says quite a bit.
— David (@David) 1556734893.0

Facts don't care about your feelings.