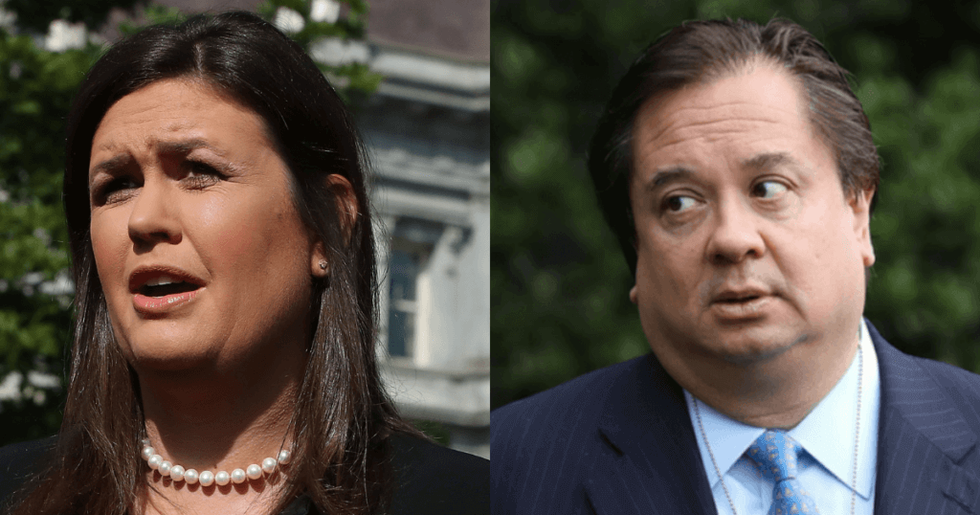 Attorney General William Barr released his summary of Special Counsel Robert Mueller's report on Sunday and the White House immediately tried to spin it as a total win for President Donald Trump.

In a letter to Congress, Barr wrote that Mueller “did not establish that members of the Trump Campaign conspired or coordinated with the Russian government in its election interference activities" and “ultimately determined not to make a traditional prosecutorial judgment” on whether the president obstructed justice.

"The Special Counsel, therefore, did not draw a conclusion - one way or the other – as to whether the examined conduct constituted obstruction."

Barr noted, however, that although the report “does not conclude that the President committed a crime, it also does not exonerate him."

George Conway, a conservative lawyer, outspoken Trump critic, and husband to one of Trump's closest advisors, was not about to let Sanders get away with such a blatant distortion of the Attorney General's words

"You misspelled 'While this report does not conclude that the President committed a crime, it also does not exonerate him.' Pls fix. Thx."

You misspelled “While this report does not conclude that the President committed a crime, it also does not exonerat… https://t.co/foPmNEHPKH
— George Conway (@George Conway) 1553459216.0

Sanders' Twitter feed was inundated with similar comments from people wondering why she would lie about something so obvious. She knows we can read, right?

@PressSec YOU ARE A LIAR AND HAVE TAKEN PART IN OBSTRUCTION OF JUSTICE. YOUR STATEMENT IS DESPICABLE. YOU ALL DESER… https://t.co/ArzQ5jrqPA
— Democracy 4 All (@Democracy 4 All) 1553506538.0

"No Collusion, No Obstruction, Complete and Total EXONERATION. KEEP AMERICA GREAT!" the president tweeted shortly after Barr's letter was made public.

But he did not get away with it.

Barr quite literally said that Trump was not exonerated.

@realDonaldTrump "The Special Counsel states that 'while this report does not conclude that the President committed… https://t.co/rOi4JIXdwM
— Ryan Hill (@Ryan Hill) 1553486203.0

@realDonaldTrump Barr includes this quote from the Mueller report. “While this report does not conclude that the Pr… https://t.co/BO2QniKSW1
— Mia Farrow (@Mia Farrow) 1553522298.0

@realDonaldTrump Hey #Trump… If you’re so innocent, how come you fought like an animal not to testify before… https://t.co/JEcAVXIM3B
— Andy Ostroy (@Andy Ostroy) 1553475981.0

At least people are going to prison for lying about something that never happened. 🤔
— GonzoModulo (@GonzoModulo) 1553525504.0

Democrats in the House of Representatives have vowed to get the full story to the American people. It is likely that Barr and Mueller will receive subpoenas to testify before Congress.

Consider too that the Mueller probe's conclusion is far from the end of Trump's legal woes. There are still 19 ongoing federal and state investigations into Trump, his businesses, his family, and his associates.