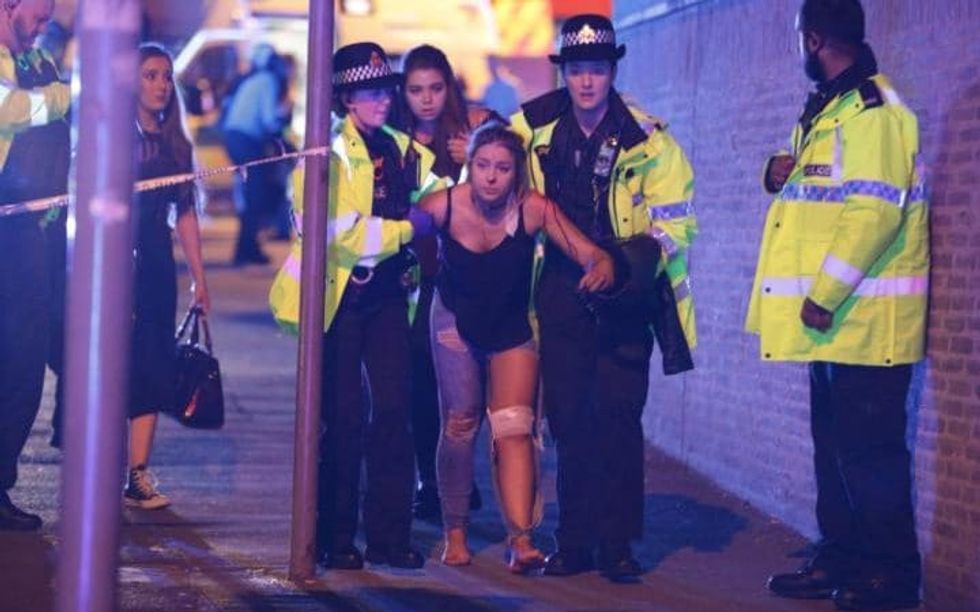 British authorities have confirmed they've arrested a 23-year old man in connection with last night's bombing in Manchester. The attack, which took place during a concert by singer Ariana Grande, killed 22 people and injured at least 59. At least 16 children are among the dead.

Bob Down, a witness in Wilbraham Road, southwest Manchester, confirmed that an arrest took place there this morning. “There were police in a couple of cars and I saw them with one guy putting him into the back of a police van," he said. "It was quite low key. They [sic] guy looked quite young.”

News outlets have not yet confirmed if this was the same man arrested by Manchester police.

Prime Minister Theresa May further confirmed that the body of the person believed to be the attacker at Manchester Arena had been identified.

“The police and security services believe they know the identity of the perpetrator but at this stage of their investigations we cannot confirm his name," she said.

The Islamic State has claimed responsibility for the attack in a statement, saying that "one of the soldiers of the caliphate placed explosive devices in a gathering of crusaders in the middle of the British city of Manchester," an indication that the attack was not a suicide bombing, as it is believed to have been. The statement said the bombing was a response to Britain’s “transgressions against the lands of the Muslims.”

In another tweet, Rita Katz, Director of SITE Intelligence Group, an organization which tracks the online activity of white supremacist and jihadist groups, said that ISIS released bomb manufacturing instructions in November. She added that ISIS's claim did not provide any information about who carried out last night's attack.

A statement from Islamic State claiming responsibility for last night's attack has been released in English as well… https://t.co/EeDOYZSAN4
— Shiraz Maher (@Shiraz Maher) 1495541201.0

The terrorist attack was the worst in the history of Manchester and the deadliest in Britain since 2005, when 52 people, along with four attackers, died in coordinated suicide bombings on London's transit system.

“After our darkest of nights, Manchester is today waking up to the most difficult of dawns,” Greater Manchester Mayor Andy Burnham told reporters. “These were children, young people, and their families. Those responsible chose to terrorize and kill. This was an evil act.”

Burnham confirmed that a vigil for the victims will be held in Manchester Centre. "There is a need for the city, and the city region, to come together, so we are making arrangements for a vigil," he said.

Prime Minister May expressed her condolences via a televised statement.

“We now know that a single terrorist detonated his improvised explosive device near one of the exits of the venue, deliberately choosing the time and place to cause maximum carnage and to kill and injure indiscriminately,” she said. “The explosion coincided with the conclusion of a pop concert which was attended by many young families and groups of children. This attack stands out for its appalling, sickening cowardice, deliberately targeting innocent, defenseless children and young people who should have been enjoying one of the most memorable nights of their lives.”

President Donald Trump, speaking at a news conference in the West Bank city of Bethlehem on Tuesday with Mahmoud Abbas, the president of the Palestinian Authority, also condemned the attack.

“The terrorists and extremists and those who give them aid and comfort must be driven out from our society forever,” Trump said. "This wicked ideology must be obliterated, and I mean completely obliterated."

Adding that he would not call the assailant a "monster" because "they would think that's a great name," the president said that people who commit terrorist acts like the one at the concert are "evil losers."

“I will call them from now on losers, because that’s what they are,” Trump said. “They’re losers. And we’ll have more of them. But they’re losers. Just remember that.”

The White House released a readout of the president's phone call with May. It reads, in part:

The president reassured the prime minister that Americans stand with the people of the United Kingdom and that our resolve will never waiver in the face of terrorism. He offered American aid in the United Kingdom’s investigation and vowed to continue the mutual fight against terrorism.

Both leaders commended the courage, speed and professionalism of those who responded to the wounded, secured the innocent, and tended to the survivors and their families.

The president said he looks forward to seeing prime minister May in person this week and discussing America’s unbreakable commitment to the United Kingdom and the ways both countries can work with allies and partners around the world to defeat terrorism.

Prime Minister May and Trump are expected to meet later this week at a G7 meeting in Sicily, which will likely shift attention toward renewed discussions about terrorism.