Lindsey Graham Just Revealed What He Would Advise Donald Trump to Do If Brett Kavanaugh Is Voted Down, and People Can't Even 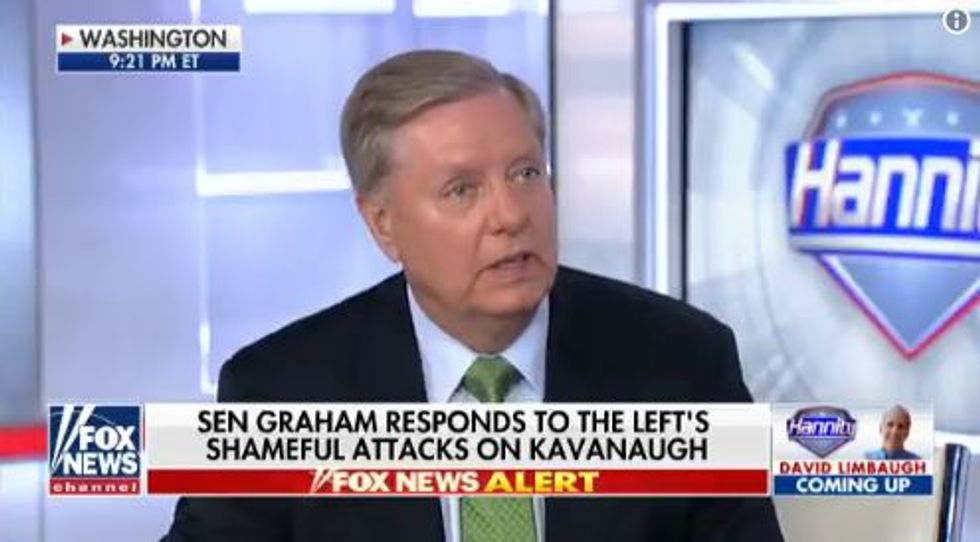 Senator Lindsey Graham (R-SC) remained adamant in his support for Supreme Court nominee Brett Kavanaugh on Hannity last night, reiterating his belief that the effort to halt Kavanaugh's confirmation on the basis of sexual assault allegations is a smear campaign by Democrats.

However, as more reports of Kavanaugh's drunkenness and aggression begin to suggest he misled the Senate Judiciary Committee under oath, his confirmation is becoming less and less certain. When host Sean Hannity asked the senator what President Donald Trump should do if Kavanaugh loses the confirmation, Graham had an interesting take.

"Here's what I would tell the president, I would appeal the verdict of the Senate to the ballot box." He continued:

"So what would I do? I would renominate him and I would take this case to the American people."

He explained his logic:

"I’d ask voters in Indiana and Missouri and North Dakota and other places where Trump won saying who he would nominate if he got to be president and see if voters want to appeal the verdict of their senator."

Americans couldn't believe their ears either:

Others pointed out that the American people to whom Graham is so ready to entrust the decision don't want Kavanaugh either. Kavanaugh has the lowest support of any Supreme Court nominee.

That hasn't stopped Graham from vociferously defending Kavanaugh even after the nominee's testimony was thought to be a disaster.

Graham's statements to Kavanaugh during the nominee's testimony went viral as he railed against Democrats on the Senate Judiciary Committee.

“What you want to do is destroy this guy’s life, hold this seat open and hope you win in 2020...This is the most unethical sham since I’ve been in politics.”

I think Lindsey Graham's outbursts today are about interviewing for the job of Trump's next attorney general.
— Dan Rather (@Dan Rather) 1538084055.0

.@LindseyGrahamSC just auditioned for Attorney General. I bet he gets the part.
— Scott Dworkin (@Scott Dworkin) 1538083465.0

The promise--or even the hope--of a high-level cabinet position would certainly explain Graham's transformation from Trump critic to Trump crony.