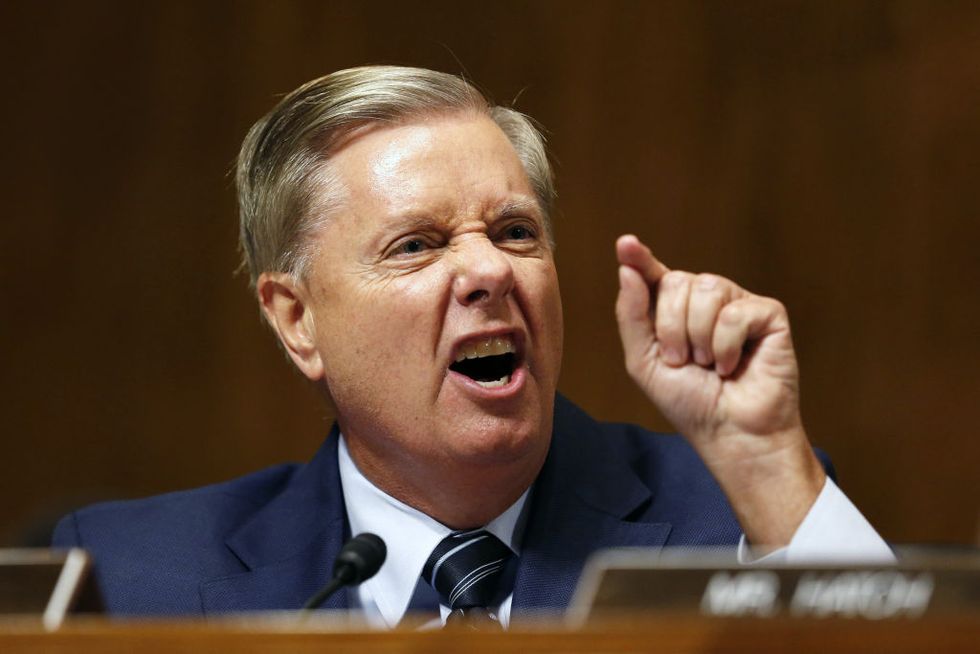 WASHINGTON, DC - SEPTEMBER 27: U.S. Senator Lindsey Graham (R-SC) speaks at the Senate Judiciary Committee hearing on the nomination of Brett Kavanaugh to be an associate justice of the Supreme Court of the United States, on Capitol Hill September 27, 2018 in Washington, DC. A professor at Palo Alto University and a research psychologist at the Stanford University School of Medicine, Ford has accused Supreme Court nominee Judge Brett Kavanaugh of sexually assaulting her during a party in 1982 when they were high school students in suburban Maryland. (Photo By Michael Reynolds-Pool/Getty Images)

President Donald Trump shocked the nation on Sunday when the armed forces he stationed at the border to meet the migrant caravan traveling to the border deployed tear gas on the asylum seekers, many of whom included women and toddlers.

Tear gas assaults the mucous membranes to irritate skin and cause difficulty breathing, and creates a heat behind the eyes inducing them to water excessively.

Despite the gas being deployed against toddlers, some are still choosing to stick up for the President's policy. Among them is Trump critic-turned-ally Senator Lindsey Graham (R-SC).

Graham defended the President in a series of tweets.

You have to really hate President @realDonaldTrump to not understand the problems created by the caravans. He is… https://t.co/7pNy2aIzIb
— Lindsey Graham (@Lindsey Graham) 1543194866.0

@realDonaldTrump I support President Trump’s decision to close the border until we can get a handle on the chaos cr… https://t.co/2dDzPGOWAr
— Lindsey Graham (@Lindsey Graham) 1543196160.0

It is not illegal for people to enter the United States seeking asylum, but that hasn't stopped many members of the GOP from painting the caravan as a group of violent criminals seeking to invade the country.

Fortunately, Twitter users stepped up to the plate to correct Graham — and they didn't mince words.

@LindseyGrahamSC @realDonaldTrump It’s not against the law to request asylum. Why is the government purposely creat… https://t.co/RtQQVvdnYD
— IREgg (@IREgg) 1543247721.0

@LindseyGrahamSC @realDonaldTrump No, it’s not about hating Trump. It’s about loving the principles of what being a… https://t.co/y5B6SkEoaR
— Zija Pulp (@Zija Pulp) 1543246765.0

Others called out Graham's reversal in his opinion of the President, whom he once called a "race-baiting, xenophobic bigot."

@LindseyGrahamSC @realDonaldTrump Trump is lying and you know it. These people are seeking asylum and you’re allowi… https://t.co/z6ueVxJ3DF
— Jacqueline Tribbet (@Jacqueline Tribbet) 1543253882.0

Many are speculating the reasons for Graham's constant defenses of Trump — even when these defenses pit him against public opinion.

Some seem certain that Russia has something to do with it.

@LindseyGrahamSC @realDonaldTrump Your Xmas bonus check from Russia will be in the mail soon, Miss Lindsey.
— Lee (@Lee) 1543248818.0

@LindseyGrahamSC @realDonaldTrump You really have to be compromised to tweet this verbal kow tow. How low can you go?
— MJdowntheshore (@MJdowntheshore) 1543249754.0

The crisis at the border — which saw children still in diapers running to evade tear gas — has disgusted many. Though Trump still touted the effort, presenting it as a job well done, other Americans are furiously speaking out against it.

Earlier this year, when the President's administration received widespread outcry for locking babies in cages and separating immigrant families, people thought the United States had hit rock bottom in regards to its immigration policies. Now, many are comparing the inhumanity in both of these acts.

@RealCandaceO When you put kids in cages and tear gas families and also cut the opportunities for foreigners to app… https://t.co/lvEkaZD3mw
— FatDog77 (@FatDog77) 1543243438.0

@VoteOjeda2020 @Johngcole @realDonaldTrump He’s locked children in cages. Why is anyone surprised he threw tear gas at them?
— Susan Klein (@Susan Klein) 1543256468.0

The excessive force at the Mexican border has exacerbated the crisis of conscience among Americans and likely the crisis at the border as well. The disturbing images of mothers scooping up their children in an effort to save them from the effects of the gas are wearing on the ethics of Americans everywhere.

Republicans like Lindsey Graham may be able to defend the President now, but it's likely public opinion will only remain on their side for so long.