Donald Trump Threatened to Investigate the Mayor of Oakland for Shielding Immigrants From ICE, and She Just Clapped Back 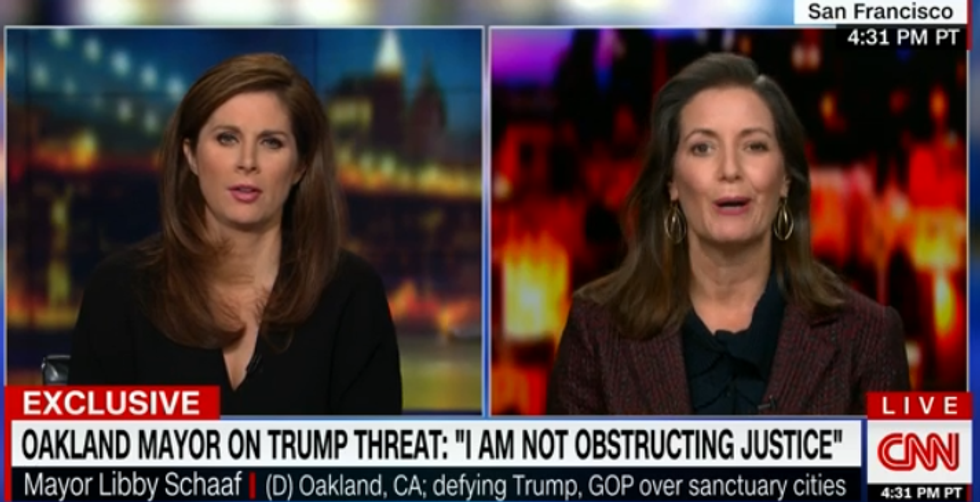 Oakland, California Mayor Libby Schaaf is standing her ground against threats by President Donald Trump, who last Wednesday called upon the Department of Justice to investigate Schaaf for obstruction of justice because of her willingness to shield undocumented immigrants from ICE raids.

On Monday, Schaaf appeared on CNN's Out Front and explained to host Erin Burnett that Republicans in Washington are not going to intimidate her into failing to protect undocumented immigrants.

I'm not going to let the bullies in Washington, DC, deter me from doing what I know is right for my community. In Oakland, we're very clear about what our values are. We value our immigrant communities. We value diversity. And we will not allow anyone to intimidate us. We will not apologize for those values.

"You talk about obstruction of justice — I would recommend that you look at obstruction of justice for the mayor, Jeff," Trump said to Sessions on Wednesday.
"Mr. President, I am not obstructing justice. I am seeking it," Schaaf wrote in a Washingon Post op-ed on Friday. In February, Schaaf issued a warning to undocumented immigrants in Oakland that ICE was planning raids in the Oakland area.
"I am sharing this information publicly not to panic our residents but to protect them," she said. "My priority is for the well-being and safety of all residents -- particularly our most vulnerable."

@CNNPolitics Thank heavens someone is willing to fight! Thank you Mayor Schaaf! We are in desperate need of more leaders like you!
— Jper (@Jper) 1526954345.0

"I wanted to make sure that people were prepared, not panicked, and that they understood their legal rights," Schaaf said in her op-ed. "As a leader, it's my duty to call out this administration's anti-immigrant fearmongering for what it is: a racist lie."

Yesterday, Congressman Steve King (R-IA), a conservative firebrand infamous for his racist comments on immigrants, introduced a bill in the House of Representatives that would "target state and local officials in Sanctuary Cities who act to obstruct Immigration and Customs Enforcement (ICE) efforts to enforce federal immigration laws."

President @realdonaldtrump how many rabid, violent MS-13 animals do mayors like @LibbySchaaf allow to prey on our c… https://t.co/FWfroqIoUe
— Steve King (@Steve King) 1526939289.0

The Mayor Libby Schaaf Act of 2018 threatens federal officials with up to five years in prison for those who "obstruct or impede the enforcement of federal laws."

"I want lawless, Sanctuary City politicians to hear this message clearly: if you obstruct ICE, you are going to end up in the cooler," King said in a statement. Schaaf has said as mayor, it's her "duty to protect my residents — especially when our most vulnerable are unjustly attacked."
Responding to the lawsuit, Schaaf told CNN that there is no way King's proposed law "could be legal."

That is part of the beauty of American democracy: a balance between state, local and federal power. And I can tell you I know a lot more about what makes my community safe than a Congress member from Iowa.

Trump's plea to Attorney General Jeff Sessions to investigate Schaaf is the latest round of anti-immigration crackdowns by the administration. Oakland is a so-called "sanctuary city," a jurisdiction which has policies in place that limit cooperation with federal immigration enforcement. They have been a sought-after target for immigration hardliners on the right for years.

"Her actions support those who flout our laws and boldly validates illegality," Sessions said. "There's no other way to interpret those remarks."

Sessions added: "So here's my message to Mayor Schaaf: How dare you? How dare you needlessly endanger the lives of law enforcement to promote an open borders agenda?"