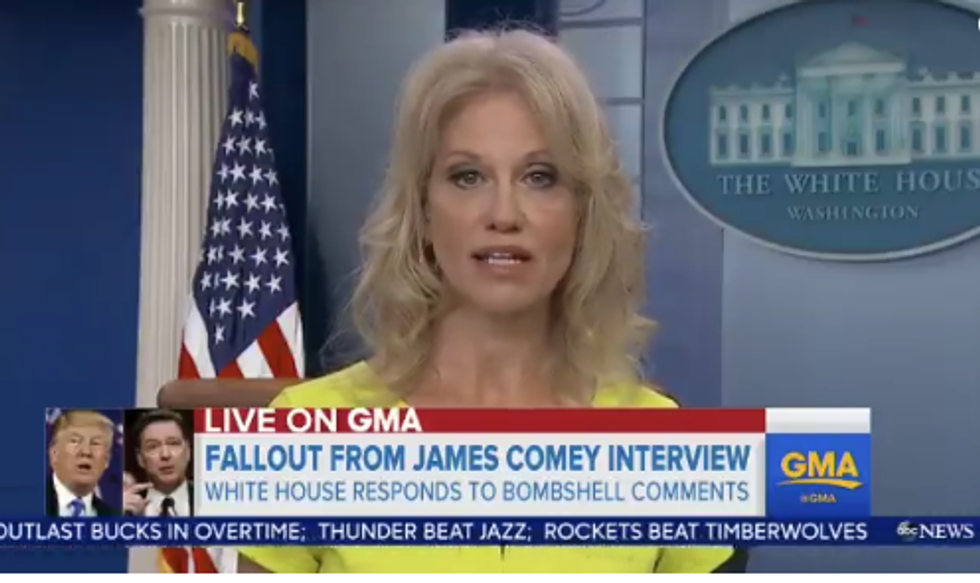 On Monday morning, Kellyanne Conway took to the airwaves to go after James Comey on behalf of Donald Trump, and raised some eyebrows when she remarked that Comey "swung an election."

"He swung an election, he thought the wrong person would win, the people in his household wanted the other person to win..."

It didn't take long for Twitter to notice that Conway was essentially admitting that Trump would not have won if not for Comey's interference.

Trump must be furious with Kellyanne Conway after she implied that Comey caused Hillary to lose the election. Woun… https://t.co/UWzaMHG1NW
— Adam Best (@Adam Best) 1523885733.0

So Conway has now reversed herself and is now claiming she was just joking, that she meant it to be sarcastic.

This misleading headline should include an eye roll and question mark. Point I made on 3 shows is that we are suppo… https://t.co/HnTBgNtx2s
— Kellyanne Conway (@Kellyanne Conway) 1523886077.0

He did not. He swung and miss. I was putting to bed that he was even capable of such a thing. Add sarcasm and stir. https://t.co/fXkoFPn3aC
— Kellyanne Conway (@Kellyanne Conway) 1523888011.0

But some are skeptical, considering there was no indication from her tone in the interview itself that she meant it sarcastically at all.

I defy anyone to agree with Kellyanne Conway after watching this interview that she was “just joking” when she said… https://t.co/mvJ6q21eqY
— Jonathan Alter (@Jonathan Alter) 1523890170.0

There's no reason anyone in America, whether in media or a layperson, needs to credit Conway's pathetic attempt at… https://t.co/VdbnHySXGU
— Seth Abramson (@Seth Abramson) 1523892061.0

But this shouldn't be surprising considering the White House often uses "just kidding" to excuse comments that Trump makes when he makes statements that are clearly meant to be taken seriously.

Such as when Trump accused Democrats of treason:

White House press secretary Sarah Sanders said Tuesday the President was "clearly joking" when he made the comment.
"He was making the point that even when good things are happening they are still sitting there angry," she said.

Or when he suggested police hit perpetrators' heads on their police cars when they're taking them away.

"When you guys put somebody in the car and you're protecting their head, you know, the way you put their hand over?" Trump said during a speech to law enforcement on Long Island, New York. "Like, don't hit their head, and they just killed somebody -- don't hit their head. I said, you can take the hand away, OK?"
Sanders said he was "making a joke at the time."

Or when Trump said Rex Tillerson should take an IQ test to prove who's smarter.