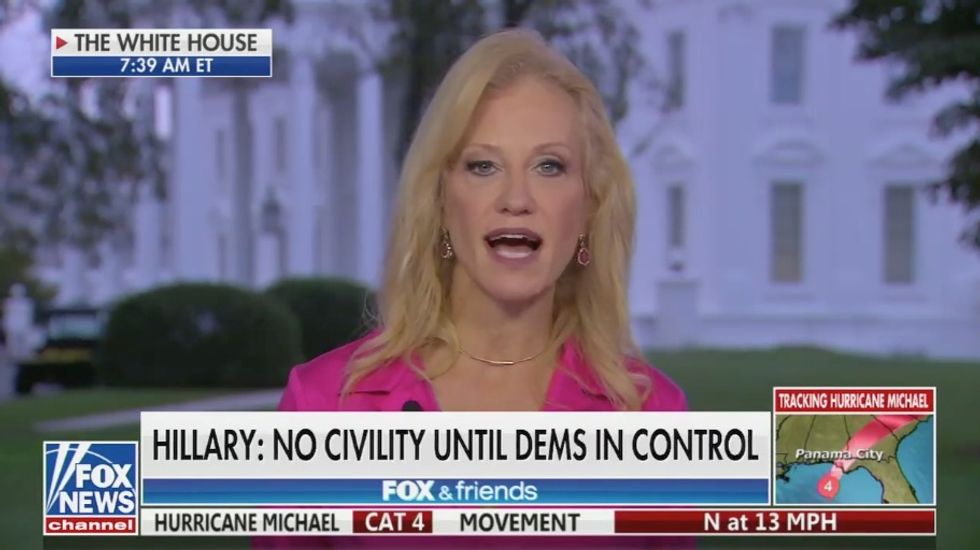 White House advisor Kellyanne Conway on Wednesday took aim at Hillary Clinton, who on Tuesday said that as long as Republicans are in power, there is no room for civility in American politics.

It started when Clinton spoke with CNN's Christiane Amanpour earlier this week about how uncivil Republicans have been to Democrats, and herself, over the years.

"You cannot be civil with a political party that wants to destroy what you stand for, what you care about," Clinton told Amanpour. "That's why I believe if we are fortunate enough to win back the House and/or the Senate, that's when civility can start again. The only thing the Republicans seem to recognize and respect is strength."

Conway decided it would be a good idea to attack Clinton - in exactly the manner Clinton described in her CNN interview.

In an appearance on Fox & Friends, Conway said she doesn't "like the implications" Clinton had made when accusing the GOP of being uncivil - by lobbing a string of personal attacks against the former Democratic presidential candidate.

Conway jabbed at what she feels are Clinton's supposed shortcomings, like having a law degree from Yale and having been the first lady for eight years.

"It's one thing to call us deplorable, irredeemable, to laugh at all the people who don't have all the privileges she has had with her Ivy League law degree and her marriage to a much more popular man who was a two-term president that she will never be."

"I don't like that kind of talk," Conway continued, claiming that she and her boss, Trump, "avoid it."

Conway went on to claim:

"My boss has called for civility. He's said that he represents all Americans."

This claim that Trump has called for civility did not go over too well on Twitter.

At rallies, Trump's fans routinely chant "lock her up," and the president does nothing to stomp it out.

During the 2016 primaries, Conway tore into Trump for the way he ran his businesses.

No one is buying what Conway is selling.

@FoxNews @KellyannePolls @HillaryClinton HER discourse is dangerous?? But not Trump’s, or Kellyanne’s lies backing him up? HAHAHAHA!
— Karin Fox (@Karin Fox) 1539176859.0

"Zero self-awareness," one user said, as the blowback continued.

The president is also still calling the media "fake news."

Despite so many positive events and victories, Media Reseach Center reports that 92% of stories on Donald Trump are… https://t.co/YHfGjfMThn
— Donald J. Trump (@Donald J. Trump) 1539176465.0

In contrast to Conway's defensive performance, Clinton's sitdown with Amanpour was calm, collected, and unaggressive.

Clinton cited other examples of GOP uncivility too.

"I remember Republicans operatives shutting down the voting in Florida in 2000," Clinton said. "I remember the swiftboating of John Kerry. I remember the things that the Republican Party did to John McCain in 2000."

Clinton concluded that "when you're dealing with an ideological party that's driven by the lust for power... you can be civil, but you can't overcome what they intend to do unless you win elections."