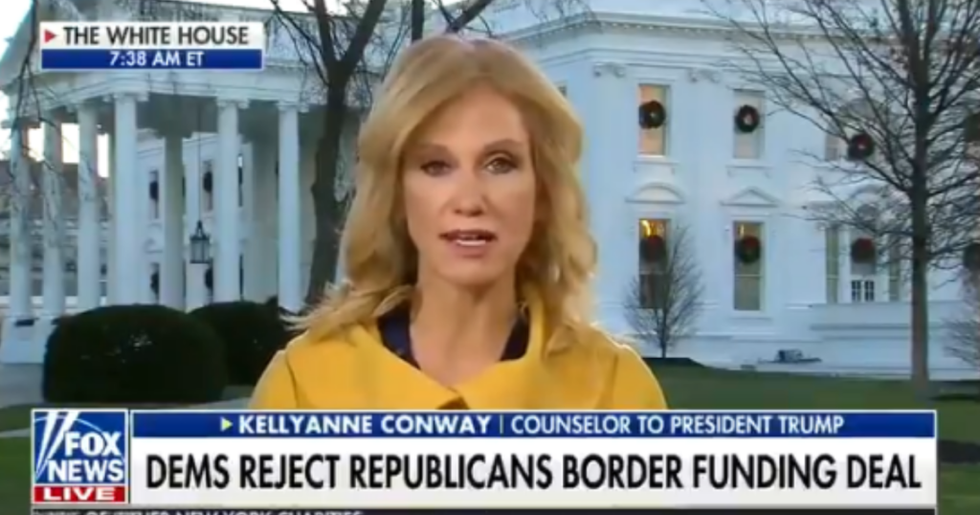 White House advisor Kellyanne Conway on Wednesday falsely claimed that the current impasse over government spending is not directly related to President Donald Trump's demand for a border wall.

“Let’s not all acquiesce to the ridiculous sound bite that this is about a wall,” Conway said on Fox & Friends Wednesday morning. “They’re trying to make ‘wall’ a four-letter word but the president has been talking about border security all along, as have the Democrats until he became president."

Conway continued, incorrectly equating past Democratic support for fencing along the southern border with favoring a wall.

"In 2006 they voted for the Secure Fences Act," Conway recalled. "That included [Senate Minority Leader Chuck] Schumer, Hillary Clinton, Barack Obama, Joe Biden... 26 Democrats voted for that. This past July, 10 of the 15 Democrats on the appropriate committee, the relevant committee, voted for border security."

Just to be clear: voting for border security does not mean supporting a wall.

Regardless, shortly after Conway's appearance on Fox, Trump hopped onto Twitter and instantly torpedoed Conway's argument by reaffirming his unsubstantiated belief that a wall is the best way to secure the border.

"In our Country," wrote Trump, "so much money has been poured down the drain, for so many years, but when it comes to Border Security and the Military, the Democrats fight to the death. We won on the Military, which is being completely rebuilt. One way or the other, we will win on the Wall!"

Last week, Trump boasted to Schumer and soon-to-be Speaker of the House Nancy Pelosi (D-CA) he would be "proud to shut down the government" over "border security," which in Trump speak means funding for a wall. Pelosi fired back by telling the president he does not have the votes.

@thinkprogress "I have a yellow coat with big buttons, so Democrats must fund President Trump's wall!"
— Rob Pawlikowski (@Rob Pawlikowski) 1545229095.0

Twitter also reminded Trump that Mexico is supposed to pay for the wall. Somehow.

The president said Mexico would fund the structure through a new trade deal, the USMCA, even though the agreement has not been finalized.

@realDonaldTrump Maybe you should pay for the wall since you are such a successful businessman. You could brand it… https://t.co/xjlmbhxwqZ
— Doug Willrett (@Doug Willrett) 1545251769.0

Many feel that a wall would be a titanic waste of money.

@realDonaldTrump A lot of money is wasted on military budget. The problem is you & other politicians in control of… https://t.co/ucVJJjah4Z
— Jeremey Wald (@Jeremey Wald) 1545252983.0

But the fact is, Trump is probably not getting his wall.

@realDonaldTrump U cant spin this, this is a devastating loss. U bluffed on one the of the main pillars that got u… https://t.co/jmyUbKAZhh
— jaime stawicki (@jaime stawicki) 1545247844.0