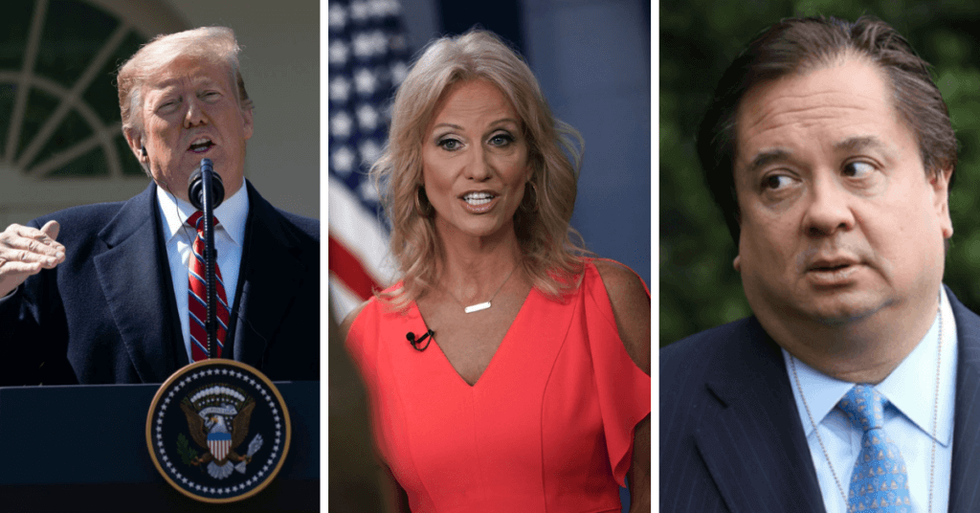 Presidential counselor Kellyanne Conway defended President Donald Trump’s attacks on her husband George Conway. Trump, she said, is a "counterpuncher" who was bound to respond when George Conway asserted that he has a mental illness.

“He left it alone for months out of respect for me,” Conway told Politico in a telephone interview. “But you think he shouldn’t respond when somebody, a non-medical professional accuses him of having a mental disorder? You think he should just take that sitting down?”

@politico Why are people giving George Conway a pass? It is extremely disrespectful to Kellyanne for him to critici… https://t.co/Tk1QsmZ988
— Lisa Boothe (@Lisa Boothe) 1553103693.0

Kellyanne Conway told Politico that the president has always treated her respectfully.

“The president is obviously defending me,” she said. “He could privately say to me, ‘Honey you’re a distraction. We love you. You'll always be a part of the family but go be with your kids. They need you. Go make a million dollars an hour. Go do that honey.’ It’s the opposite.”

“Why would it affect my job? Hasn’t everybody tried to push me out already and here I am, stronger than ever,” she said. “You're looking at it the wrong way.”

“Yesterday George spent the day tweeting about the president. I spent my day doing two one-hour briefings with press and intergovernmental affairs people, agency people from all across the country and then over an hour briefing that I led in the Oval Office with the president and first lady in the cabinet on opioids at one year, so this is what I do here. I think it probably looks differently if everybody is turning into ‘Gossip Girl.’”

Kellyanne Conway's defense of the president came shortly after Trump attacked her husband in a tweet earlier this morning. George Conway has been a high profile critic of the president for quite some time but Trump had until today ignored his criticisms.

In his tweet, Trump referred to George Conway as "Mr. Kellyanne Conway," and ridiculed him as "a stone cold LOSER & husband from hell!"

George Conway, often referred to as Mr. Kellyanne Conway by those who know him, is VERY jealous of his wife’s succe… https://t.co/TgFSVYlwdh
— Donald J. Trump (@Donald J. Trump) 1553082700.0

It was then that Conway suggested Trump suffers from a narcissistic personality disorder, which many members of the psychiatric community have also suggested.

You seem determined to prove my point. Good for you! #NarcissisticPersonalityDisorder https://t.co/ZSpb3UXVPC
— George Conway (@George Conway) 1553083837.0

When asked about the feud by reporters, Trump said Conway is "a wack job, no question about it."

"I think he's doing a tremendous disservice to a wonderful wife. Kellyannne is a wonderful woman, and I call him 'Mr. Kellyanne,'" he added, reiterating his earlier insult.

George Conway, for his part, has said that Trump's attempt to insult him is both "extremely juvenile and boorish."

It isn’t—except perhaps to the extremely juvenile and boorish. What I really wouldn’t want to be called is “Indivi… https://t.co/3rPR2z4Xhx
— George Conway (@George Conway) 1553095139.0

The spat between the two men comes during an already embattled week for the president, who railed against "fake news" media in multiple tweets over the last few days as the White House anticipates the release of Special Counsel Robert Mueller's report.