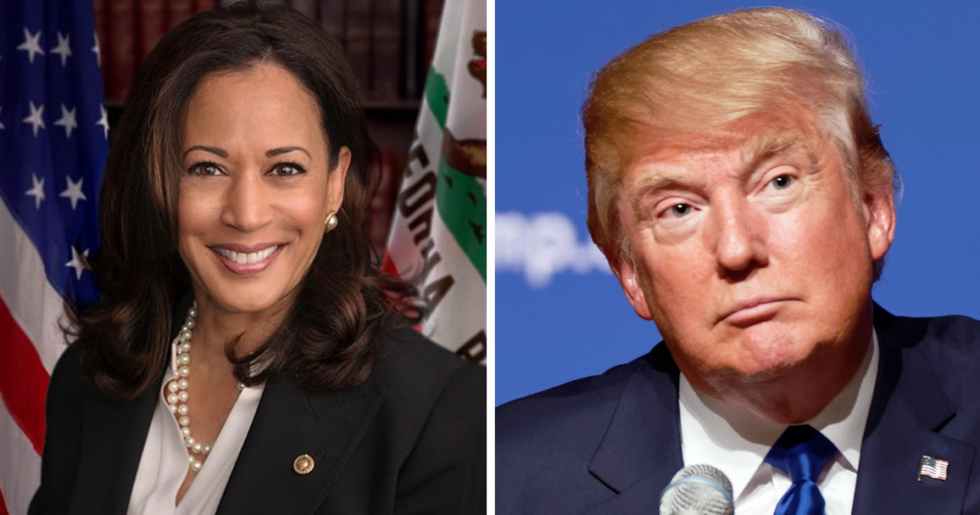 Yesterday, President Donald Trump tweeted a widely mocked "Save the Date" message for a big celebration in Washington D.C. The celebration in question? American Independence Day.

The nation's capital already has a slew of festivities planned for the holiday, just as it does every year. When asked about the president's tweet, Senator Kamala Harris, a Democratic presidential hopeful, laughed and said: "I think the President needs to realize it’s America’s birthday, not his birthday."

Harris wasn't the only Democrat to poke fun at the president's proposal, which he floated earlier this month during a Cabinet meeting.

As was Representative Eric Swalwell (D-CA), who is also said to be considering a presidential run:

If this goes well, I think we should follow it with a big party in Times Square the night before New Year’s Day. https://t.co/PiiNrcpIml
— Rep. Eric Swalwell (@Rep. Eric Swalwell) 1551018381.0

Representative Bobby L. Rush (D-IL) offered a more pointed response, tweeting a "HOLD THE DATE!" of his own, saying Democrats "will do our constitutional duty to protect our system of checks and balances" against the president's multiple violations of "the Congress's constitutional authorities."

This is actually an excellent idea and I think the whole country should get behind a celebration on July 4. https://t.co/zsBylc4ZhR
— Brian Schatz (@Brian Schatz) 1551029547.0

The White House has not commented on the president's tweet and it's unclear how his proposed bash would work with existing events.

Other critics of the president's announcement, such as CNN political commentator Chris Cillizza,  say his proposed event would give the president the opportunity "to weaponize the idea of patriotism."

"Patriotism, in Trump's world, is supporting his policies without question," Cillizza wrote. "Protesting those policies, which, by the way, was how America was formed, is tantamount to rooting against our country."

While it’d be wonderful if Trump’s proposed event was actually about celebrating the founding of our country, given Trump’s tendency to make nearly everything about himself, this seems highly unlikely. ...

Beyond those concerns, this Trump-headlined event appears to be nothing more than a 2020 campaign rally. How can I say that? Well, just look at how Trump spent the last two July 4th weekends as President — back when the 2020 race was not yet top of mind. In 2017, Trump celebrated our nation’s Independence Day by playing golf at his exclusive country club in New Jersey, although he returned for one day to Washington to be a part of the “Celebrate Freedom” concert honoring our nation’s veterans. In 2018, Trump again played golf on July 4th, but this time he stayed closer to the White House by playing a round at his private country club in Northern Virginia.

President Xi of China has been very helpful in his support of my meeting with Kim Jong Un. The last thing China wan… https://t.co/wDFsPyFanZ
— Donald J. Trump (@Donald J. Trump) 1551013549.0

The discussion surrounding the president's proposed "Salute to America" brings to mind his recent efforts to see a military parade in Washington. The White House had planned one to commemorate Veterans Day last year but it was canceled after the president cited cost overruns and blamed "local politicians."

A Defense Department spokesman later contradicted the president's statements, saying he "was not briefed by any member of the Department of Defense on any cost associated with the parade.”

It had been reported that the parade would cost an estimated $92 million to organize, well above the initial $12 million estimate. It remains uncertain what a July 4th celebration like the one the president envisions would cost, but the idea is likely to face more opposition should the president continue to bring it up.