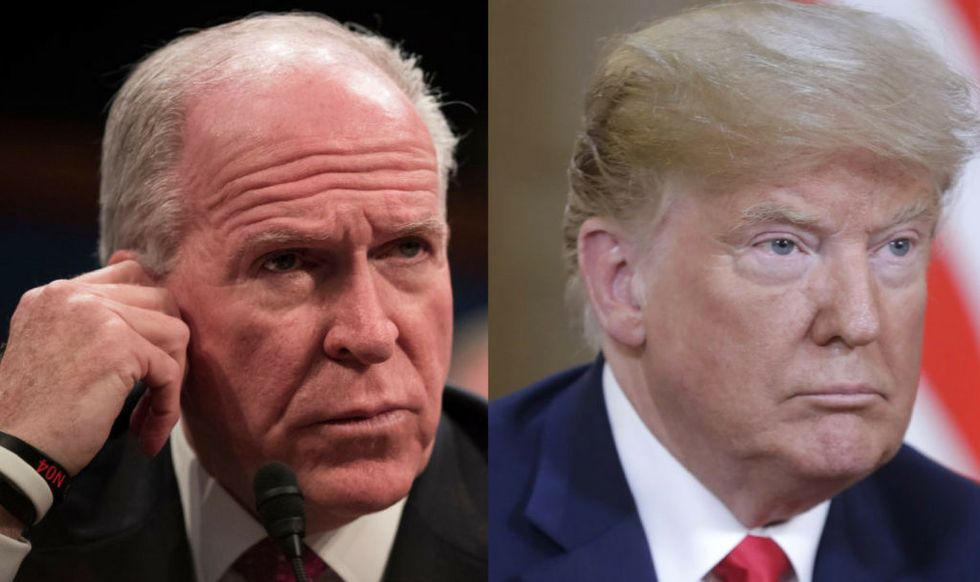 The United States is reeling after another bombshell moment from President Donald Trump's chaotic European visit. The latest instance occurred at the president's joint press conference with Russian President Vladimir Putin when Trump refused to denounce Putin directly for the Russian cyber attacks on the United States' democracy. Now, former CIA director John Brennan is calling the president's performance at the press conference "nothing short of treasonous."

His words come after Trump was asked if he would denounce Putin's actions and "warn him to never do it again." Instead of condemning the cyber attacks that all United States intelligence agencies agree originated from the Russian government, Trump refused to say that he believed his own intelligence agencies over Vladimir Putin. Instead, he talked about Hillary Clinton's emails and said:

But I have -- I have confidence in both parties. I -- I really believe that this will probably go on for a while, but I don't think it can go on without finding out what happened to the server. What happened to the servers of the Pakistani gentleman that worked on the DNC? Where are those servers? They're missing; where are they? What happened to Hillary Clinton's e-mails? 33,000 e-mails gone -- just gone. I think in Russia they wouldn't be gone so easily. I think it's a disgrace that we can't get Hillary Clinton's 33,000 e-mails.

So I have great confidence in my intelligence people, but I will tell you that President Putin was extremely strong and powerful in his denial today.

The president even went on to float the possibility of collaborating with the Russian military to see if they hacked the 2016 presidential election:

The reception of Trump's performance has been, by and large, negative. Many are siding with John Brennan:

This press conference is an absolute disgrace. Trump won't even side with America. What Trump did today was commit… https://t.co/TwZheMDkR7
— Joe Walsh (@Joe Walsh) 1531756992.0

In this extraordinary press conference, Trump and Putin and teaming up against the entire American intelligence and… https://t.co/nyR5Rz97pa
— Judd Legum (@Judd Legum) 1531756238.0

Though a sitting United States President siding with aggressors over Americans is what many are calling historic, it will be the reaction of the president's own Republican party that determines whether this moment is epochal enough to turn the tides.

In addition to Trump's refusal to side with Americans, Trump tweeted that the United States was to blame for strained relations with Russia. The president sided with a foreign enemy over the United States multiple times. For some Republicans, it's finally too much.

Reactions from the right are beginning to pour in.

I never thought I would see the day when our American President would stand on the stage with the Russian President… https://t.co/qwqtrGT6pU
— Jeff Flake (@Jeff Flake) 1531757642.0

Today’s press conference in #Helsinki was one of the most disgraceful performances by an American president in memo… https://t.co/CS9FXzjmjW
— John McCain (@John McCain) 1531764238.0

However, despite what many are calling the most disgraceful performance from a United States president in their lifetimes, It's hard to say whether this will be the straw that breaks the back of passivity or if this is yet another turn through the labyrinth of a new, insidious normal.