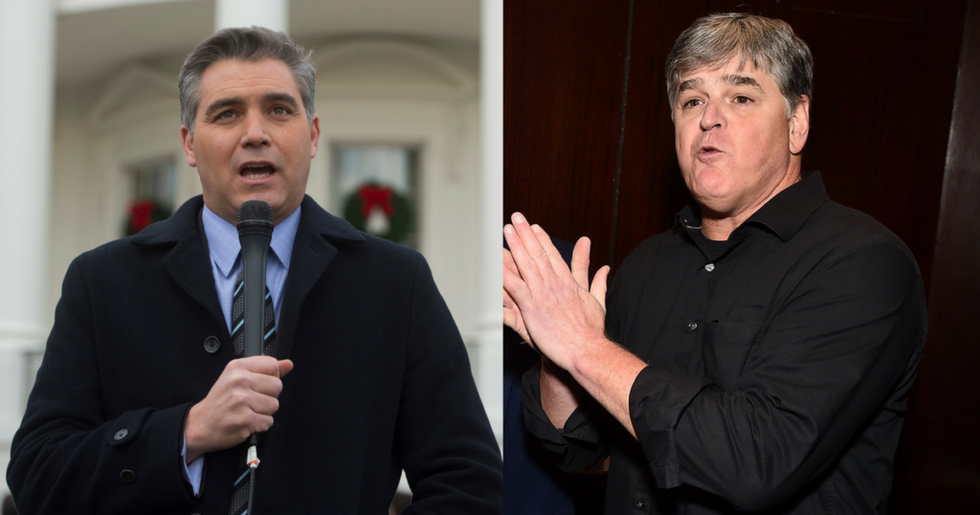 Acosta is CNN's Senior White House Correspondent and has drawn the ire of the president for asking tough questions and not backing down in his pursuit of the truth.

Hannity is a right-wing entertainer who has suggested that Trump should revoke the press credentials of major news organizations.

Acosta tweeted that Hannity's constant defense of President Donald Trump, and his relentless attacks on the free press, makes Hannity a "propagandist for profit, peddling lies every night."

Acosta reminded Hannity and the world that the Fox News conservative once admitted: "he's just a talk show host, not a journalist."

"But he’s injecting poison into the nation’s political bloodstream," Acosta wrote of Hannity, "warping public attitudes about the press." Acosta concluded that he's "confident in the long run the truth will prevail."

Hannity fired back Wednesday evening, tweeting to "Jimmy" that he doesn't care about Acosta's feelings and referring to his career as a journalist as "lying bullshit."

Acosta was heckled during a campaign rally headlined by Trump in Florida Tuesday night by a horde of rowdy Trump fans. Rallying cries of boos, people shouting “traitor,” and “you’re a liar” were lobbed at Acosta. "CNN sucks" was also shouted at Acosta as he reported on the event.

One person accused Hannity of being the "Joseph Goebbels of this administration." Oh please, he wishes.

@seanhannity @Acosta You will go down infamously in history as the Joseph Goebbles of this administration.
— Boiling Frog (@Boiling Frog) 1533213577.0

We're not done yet.

"At least Jim isn't client #3," one user joked, poking fun at the relationship between Hannity and Trump's former lawyer and fixer, Michael Cohen. Hannity was revealed to be a client of Cohen's in April after federal agents raided Cohen's New York City home and office.

Another implied that Hannity is a doofus.

Not to mention Hannity's hypocrisy.

We know whose feelings are hurt, and they're not Acosta's.