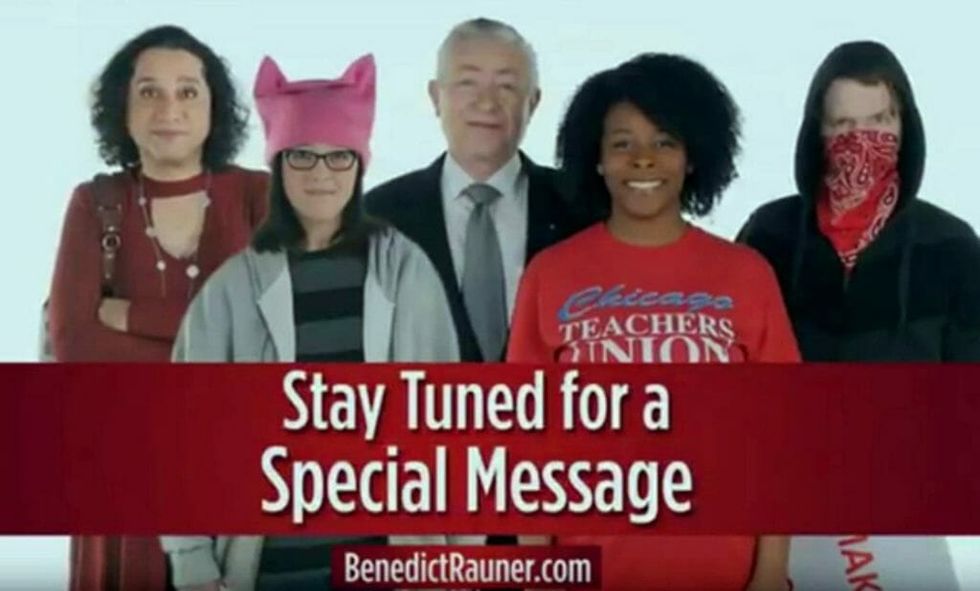 A series of actors pretend to be an "antifa" protester, a transgender woman, a Chicago teacher, and a feminist. The script calls for each caricature to thank Governor Rauner for enacting policies that furthered a supposed liberal agenda.

Interestingly, the ad cites several Illinois House bills. Representative Ives is herself a member of the governing body that created the laws Rauner signed.

The chairman of the Illinois Republican Party, Tim Schneider, directed Ives to pull the ad and issue an apology to the targeted communities.

(Ives') campaign ad does not reflect who we are as the Party of Lincoln and as proud residents of our great and diverse state. She should pull down the ad and immediately apologize to the Illinoisans who were negatively portrayed in a cowardly attempt to stoke political division.”

However Ives stands behind the ad, claiming that the state’s Republican party exists as an extension of Rauner’s campaign.

“Rauner betrayed Illinois conservatives. He and his paid-for mouthpieces don’t like his betrayals being illustrated and his radical left-wing social agenda being exposed,” according to Ives’ spokeswoman Kathleen Murphy.

Rauner is the one who owes Illinois families in general and conservatives, in particular, an apology.”

Reactions online appear largely in opposition to the ad, however some people approve of it. They represent the demographic Ives' ad wanted to reach which signals success.

@JeanneIves is on the air. Watch her introductory TV spot. If we want a successful revolt against Illinois' politic… https://t.co/8UnMTP8DJj
— Dan Proft (@Dan Proft) 1517600958.0

However Ives' ad is unlikely to sway people outside her targeted group where most view her ad as Pat Brady, former Illinois GOP chair, stated: “racist, bigoted and homophobic.”