Ivanka Told a Room Full of Donors That She Gets Her 'Moral Compass' From Her Father, and People Are Not Surprised 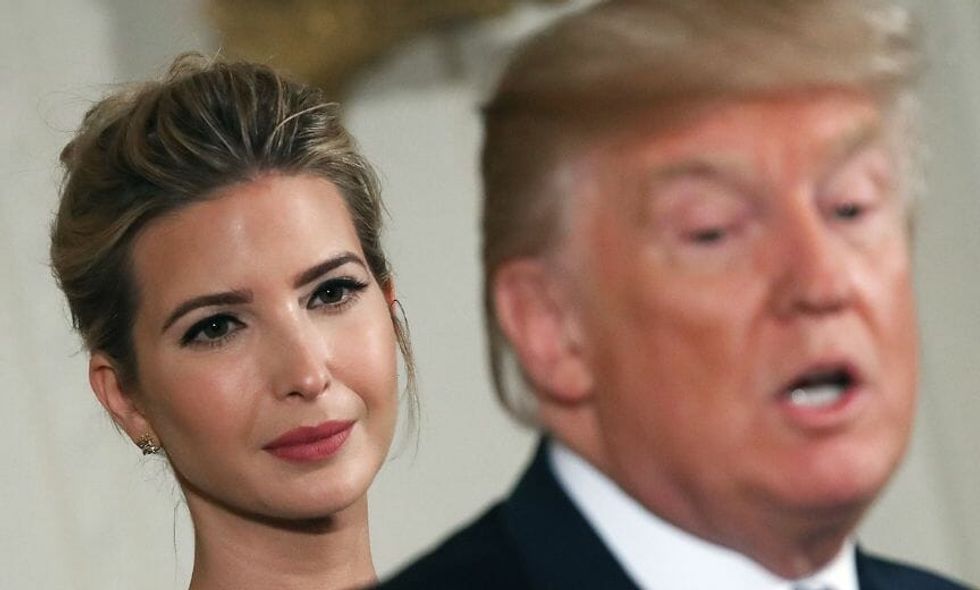 WASHINGTON, DC - AUGUST 01: U.S President Donald Trump speaks about small businesses while daughter and advisor to the President Ivanka Trump listens, during event in the East Room at the White House on August 1, 2017 in Washington, DC. (Photo by Mark Wilson/Getty Images)

In August while speaking to donors for President Donald Trump's reelection in Wyoming, White House adviser Ivanka Trump told the crowd her mother Ivana taught her to be a powerful, successful woman. And while people had their own theories on what skills or traits her father passed on, the First Daughter said the one thing her father gave her was her:

While the high-end Trump donors may not have had major reactions to that pronouncement,  once word spread outside of the private event the internet certainly did.

@MollyJongFast @marieproia Is “moral compass” a euphemism for something?
— Primrose Lane (@Primrose Lane) 1568401029.0

Actor and frequent Trump critic Mark Hamill included a visual response of his reaction when he heard the news.

He was not the only one to provide a visual aid.

@MollyJongFast I thought if there is a "trump moral compass", then it must be on the internet somewhere. Sure enoug… https://t.co/MO9KftRnia
— Ross Smith (@Ross Smith) 1568391985.0

It seemed people did not see getting a moral compass from Donald Trump as a positive.

Imagine saying you got your moral compass from Donald Trump and not meaning it as a joke https://t.co/dFTfjDJfil
— Molly Jong-Fast (@Molly Jong-Fast) 1568380321.0

Yeah I got my moral compass from the guy with more than a dozen sexual assault accusations against him. It’s just m… https://t.co/1p2oXaluKC
— Molly Jong-Fast (@Molly Jong-Fast) 1568380462.0

@MollyJongFast Her info bubble must be so darn small she apparently doesn’t see or read any domestic or internation… https://t.co/Cux1H0xxMK
— Melissa Buckner (@Melissa Buckner) 1568381355.0

While some said her Trump branded morality was obvious.

@MollyJongFast Well that one statement tells you all you need to know about pretty little Ivanka.
— Jeri T Dube (@Jeri T Dube) 1568380415.0

When President Donald Trump took office in January of 2017, Ivanka Trump and her husband Jared Kushner moved to the DC area and joined the Trump administration as White House advisers. While being featured in multiple photo ops and inserted into international diplomacy, people have been critical of Ivanka's lack of accomplishments on her stated projects.

However Ivanka and her handlers routinely assure the public she is "quietly working behind the scenes." Meanwhile the author of Trump's book Art of the Deal, Tony Schwartz, stated Ivanka was the worst of the Trump children.