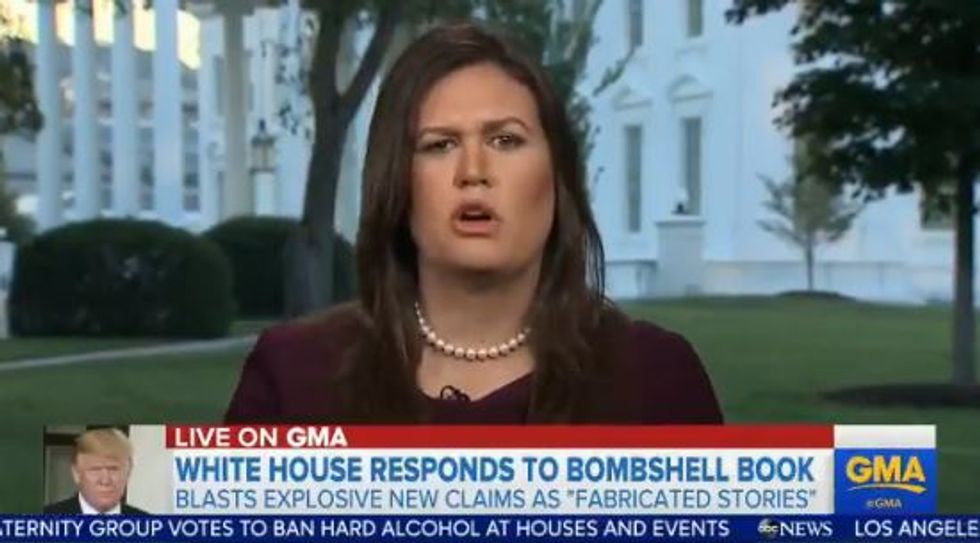 White House Press Secretary Sarah Huckabee Sanders took to Good Morning, America this morning to offset the wealth of allegations in Fear: Trump in the White House, a new book by legendary Washington Post associate editor Bob Woodward. She also claimed that Trump has had more success in his first two years than any other president.

It’s a lot of anonymous sources. What I can tell you is: I’ve worked alongside the president—under the president—for the last three years. I was part of his campaign; I’ve been part of the administration, and everything I’ve seen so far from this book doesn’t depict what’s going on in the building behind me.If the things that were said in this book were true, there is no way that this president could be as successful as he has been"

The claim Sanders made to defend the White House--that the president has had more success than any of his predecessors in his first two years––appears to hold little if any weight.

In addition, Sanders has been known to lie, whereas Woodward's reporting for the past five decades has been considered fair and reliable. This has led many to believe Woodward's words over the White House's.

@realDonaldTrump Bob Woodward has more credibility in his little fingernail than you have in your entire White Hous… https://t.co/xcv8s0mCii
— Jo Yaffe (@Jo Yaffe) 1536156317.0

Fear: Trump in the White House uses hundreds of hours of interviews and numerous documents to describe just how inadequate President Donald Trump's own administration believes him to be. The book recounts testaments of various members decrying Trump's intelligence and even stealing papers off of his desk to prevent him from signing them.

However, rebuttals of the book from the president and his White House are already rife with contradictions and outright lies.

The president remained uncharacteristically silent on Twitter for hours after news of the allegations in Woodward's book broke, however he appears to be scrambling to defend his performance now, having tweeted against the book nearly a dozen times since last night.

He also claims that the denials of his staff are enough to debunk the claims altogether.

While Trump claims that he never called Attorney General Jeff Sessions "mentally retarded," it's false that he never used the term on anyone.

Trump is also claiming that Woodward lied and even that he may be a Democratic operative.

However, Woodward was also critical of the Obama administration. Unsurprisingly, Trump repeatedly praised him for that.

Even as recently as last month, in a phone call with Woodward, recorded with the president's permission, Trump said he was "very open" to Woodward, who had "always been fair."

Sanders is citing the president's success as the basis for claims that Woodward's book is false. She'll likely need a stronger argument to dismantle the credibility of a journalist whose reporting was instrumental in uncovering the Watergate scandal and ultimately leading to the resignation of one now-infamous U.S. president.