Endangered Republican Senator Just Explained How He Plans to Win in November, and People Aren't So Sure 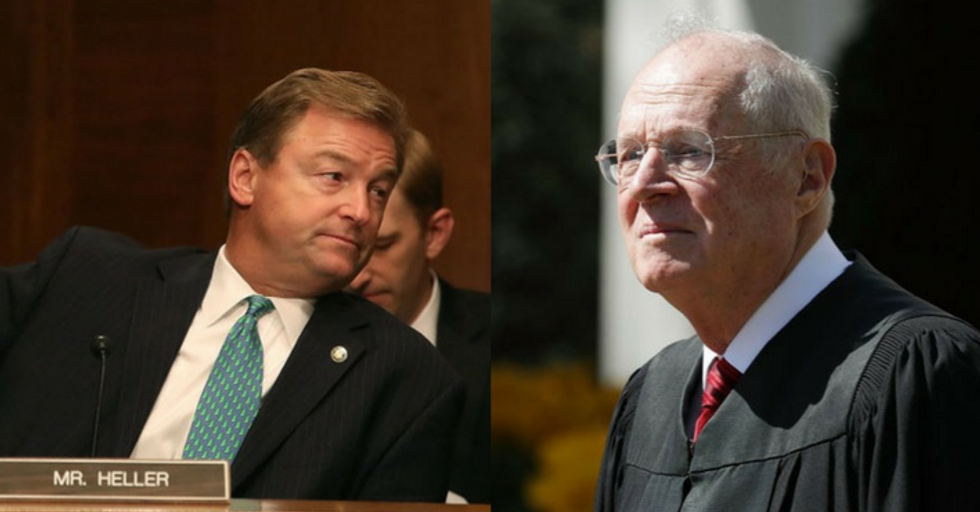 Senior Associate Justice of the Supreme Court of the United States, Anthony McLeod Kennedy, received his seat on the highest court in the land via President Ronald Reagan on February 18, 1988. Thirty years is a long time to serve. At 81 years old, Justice Kennedy is the last Reagan appointee on the bench and currently the longest serving member of the Supreme Court.

Republican Senator Dean Heller of Nevada thinks that timeline presents an opportunity for his precarious senate reelection campaign. Senator Heller predicts Justice Kennedy will retire this summer. And Heller thinks his prediction should drive Republicans to the polls.

Heller spoke at the J. Reuben Clark Law Society in Las Vegas Friday. In an audio recording from the event, the Senator made several statements about the upcoming 2018 midterm elections. He spoke about what Republicans, mostly focusing on himself, need to do to win in November.

“I’m not going to sit here and criticize him,” Heller remarked on President Donald Trump. “...I don’t want to get too far in front of some of these policies.”

Republicans and political analysts credit the Supreme Court vacancy in 2016 for keeping the Senate in GOP control and creating the Trump presidency. President Barack Obama nominated a replacement, but the GOP led Congress stalled for longer than any appointment in history ensuring Obama would not seat another SCOTUS justice.

The Nevada senator, facing serious threats in his reelection bid, hopes lightning strikes twice and a SCOTUS retirement will lead to his victory.

Kennedy is going to retire around sometime early summer. Which I’m hoping will get our base a little motivated because right now they’re not very motivated. But I think a new Supreme Court justice will get them motivated.”

However Heller neglects to recognize an important difference between 2016 and 2018 and how the Supreme Court fills vacancies. The 2016 elections GOP surge hinged on the idea of a Democrat appointing the next Supreme Court Justice. Republican leadership used that threat to gain votes for themselves on the coattails of the presidency.

But that free ride isn't available in 2018 however. The presidency currently resides in Republican hands. Regardless of Heller's return to the senate or replacement by someone else, a Republican will still fill the next open SCOTUS vacancy until 2021 when the next president would be sworn into office.

Others are pointing out the errors in Heller's logic and questioning the validity of his claims regarding Justice Kennedy. Are they an accurate prediction or just a political ploy?

Scoop: Sen. Heller predicts Justice Kennedy will retire this summer, “Which I’m hoping will get our base a little m… https://t.co/NF4S3FKgpJ
— Burgess Everett (@Burgess Everett) 1520595823.0