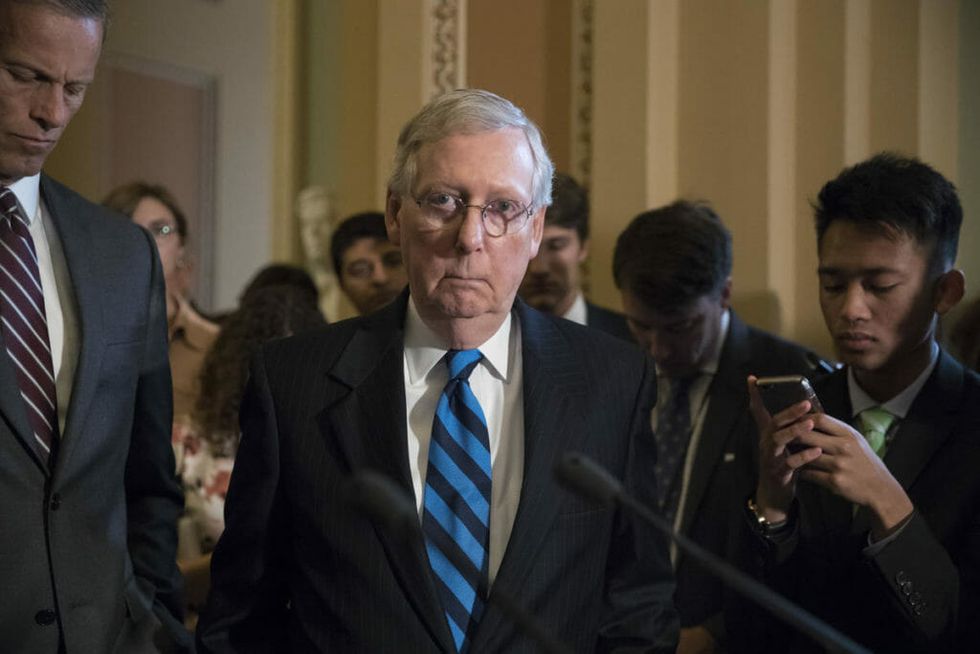 Senate Majority Leader Mitch McConnell of Ky., joined by Sen. John Thune, R-S.D., left, the Republican Conference chairman, meets with reporters after a closed-door Republican strategy session, Tuesday, July 11, 2017, on Capitol Hill in Washington. McConnell said Senate Republicans will unveil their revised health care bill Thursday and begin voting on it next week, adding, he could delay the chamber's August recess for two weeks as the GOP tries breaking logjams that have slowed work on that and other issues. (AP Photo/J. Scott Applewhite)

As the Senate GOP met to discuss their renewed effort to repeal and replace Obamacare Thursday morning, they unveiled their revised version of the Better Care Reconciliation Act of 2017.

According to The New York Times, this new bill reflects Majority Leader Mitch McConnell's effort to win over both the moderates and the conservatives in his caucus.

In a nod to his moderate wing, the new bill provides $70 billion more for subsidies to low income Americans and keeps two taxes on the wealthy that were set to be cut in the previous version of the bill.

Encouraging to conservatives is the inclusion of a version of Senator Ted Cruz's amendment in this bill, which would allow insurers offering ACA plans to also offer cheaper, bare-bones plans.

“I think we’re making serious progress towards coming together and unifying our conference and getting a bill that can command the support of at least 50 senators and pass into law.”

The bill would also:

The bill was met with harsh reaction from Senate Democrats.

The healthcare bill just released is still garbage. Get the details from @ASlavitt and @TopherSpiro but that's my summary.
— Brian Schatz (@Brian Schatz) 1499964432.0

Andy Slavitt, who ran Medicare, Medicaid and the Affordable Care Act under President Obama issued a thread on Twitter slamming the bill.

Senator Mitch McConnell hopes to have a vote on the bill next week. He had already postponed the Senate's August recess to finish work on the bill. It's unclear whether a CBO score of the revised bill would be available before a vote.