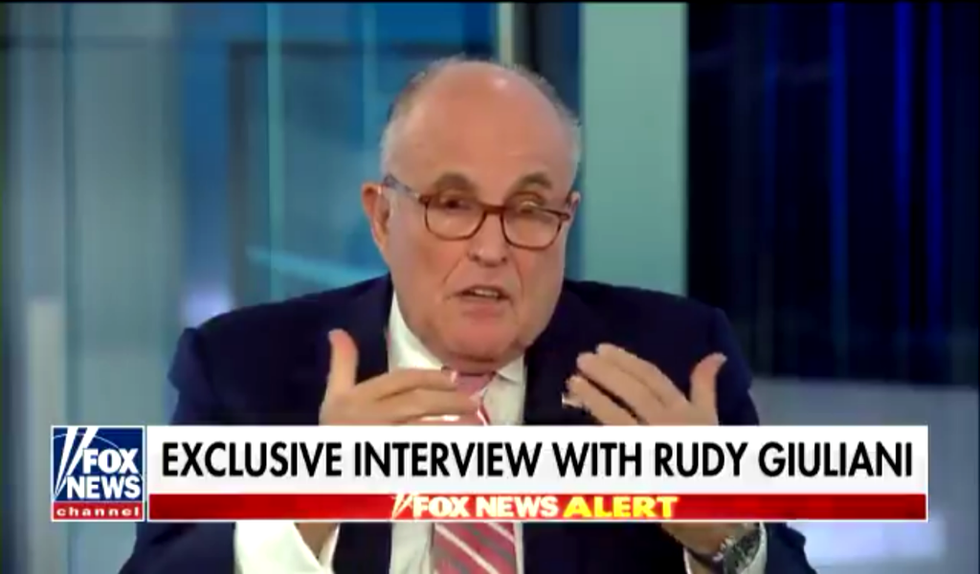 Giuliani on Trump being interview by Mueller: "Are they objective? A lot of things point in the direction that they think James Comey is telling the truth and not the president."

Argues Trump was justified in firing Comey because he wouldn't say Trump wasn't a target. pic.twitter.com/YzCb8l9ggh

After months of claiming the firing of former Federal Bureau of Investigation (FBI) director James Comey was unrelated to the Russia probe, one of the latest members of President Donald Trump's legal team says it was all about the investigation.

In an appearance on Fox News program Hannity, former New York City Mayor and current Trump lawyer, Rudy Giuliani, relayed the reason the president fired James Comey at the beginning of an hour long interview full of revelations. According to Giuliani, Comey refused to fully exonerate Trump when asked to do so, resulting in the FBI director's termination.

He fired Comey because Comey would not, among other things, say that he wasn’t a target of the investigation.”

The official investigation into Russian interference in the 2016 presidential election gained national attention in December 2016, prior to Trump being sworn into office, based in part on the Steele dossier given to the FBI. On May 9, 2017, prior to the appointment of a special counsel by the Justice Department, Trump fired then FBI director Comey.

At that time, the investigation that the president wished to be exonerated from by Comey was still in the beginning stages. Comey stated several times that the president pressured him to clear his name publicly, urging Comey to appear before the press.

Giuliani confirmed those claims in his Hannity interview. However he also makes the claim that the president was entitled to demand exoneration in an ongoing, incomplete investigation.

“He’s entitled to that. Hillary Clinton got (exonerated) and he couldn’t get that,” Giuliani told host Sean Hannity. “So he fired (Comey) and he said, ‘I’m free of this guy.’ ”

The Comey firing drew immediate criticism. It may also have been the catalyst for the appointment of a special counsel. Senator John McCain used it to make a public appeal for a special investigation by the Attorney General's office.

Trump initially cited the Russia investigation as part of his reasoning to fire Comey. During an Oval Office meeting with Russian officials, Trump called Comey a “nut job” and said firing him lifted pressure off the White House.

But after various sources in and out of government criticized Trump's comments to the Russian visitors and raised questions about potential obstruction of justice, the Trump administration amended the reason for Comey's firing.

Why Trump's legal representative chose to do that remains to be seen, but people are already reacting to the information.

@kylegriffin1 I don't understand what's taking Mueller so long. This should be over by now. The obstruction is so obvious.
— Mr. Bob Dobalina (@Mr. Bob Dobalina) 1525310294.0

Although one person saw the humor in the revealing interview.

GIULIANI: He only fired Comey cause his attempts to murder him were unsuccessful. HANNITY: I didn't know that eithe… https://t.co/6vPdSEtFyn
— Jeremy Newberger (@Jeremy Newberger) 1525312459.0