After Donald Trump Attacked the New York Times on Twitter, George Conway Took a Poll to See Who Americans Find More Credible and, Yeah, It's Not Even Close 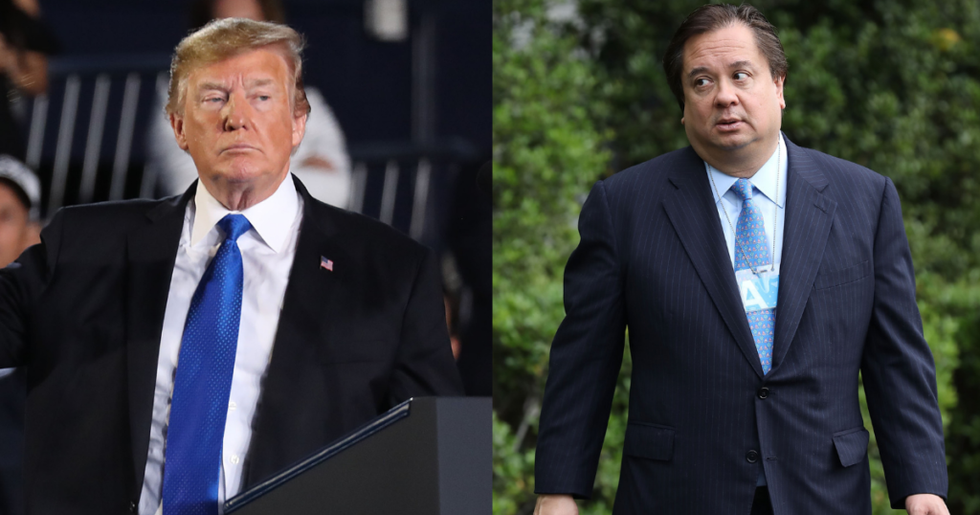 President Donald Trump launched another attack against the New York Times on Wednesday morning in response to a devasting report outlining the president's attempts to thwart investigations into himself.

"The New York Times reporting is false," Trump tweeted, offering nothing to counter the Times' reporting. "They are a true ENEMY OF THE PEOPLE!"

George Conway, who is married to White House advisor Kellyanne Conway, asked the Twitterverse to vote on who is more believable: Trump or the New York Times.

"Please vote. And then please retweet (often)," Conway requested. "Who has more Credibility?"

It was a no-brainer.

Trump's increasingly aggressive rhetoric has people concerned about violence against journalists, such as the shooting at the Capital Gazette newspaper in Annapolis, Maryland last summer.

@realDonaldTrump Trump, when you speak this way, you incite violence. We have already seen a mail bomber and templ… https://t.co/vYuLBB3wZ5
— Fred Guttenberg (@Fred Guttenberg) 1550682530.0

@realDonaldTrump Seriously...you need to stop this “enemy of the people” crap before someone in the press DIES because of it...
— Andy Ostroy (@Andy Ostroy) 1550670839.0

Resisters believe they know who the "enemy of the people" is, and it is not the New York Times.

@realDonaldTrump We cannot trust a Russia asset- so we cant trust you Donald. The New York Times has been bringing… https://t.co/QEGOzmVmaX
— Mia Farrow (@Mia Farrow) 1550679547.0

The Times story, which chronicles Trump's pattern of trying to obstruct justice, is largely based on the president's own words and actions.

@realDonaldTrump Actually their story is based on publicly verifiable facts, like your own tweets. This tweet is a… https://t.co/EvNf2ilNKj
— Renato Mariotti (@Renato Mariotti) 1550670665.0

When Trump defenders and QAnon, a far-right conspiracy theory accusing the "deep state" of having a vendetta against Trump, tried to label the New York Times as "fake news," Twitter fought back.

So did the New York Times, with publisher A.G. Sulzberger directly responding in a statement:

"All these [past] presidents had complaints about their coverage and at times took advantage of the freedom every American has to criticize journalists. But in demonizing the free press as the enemy, simply for performing its role of asking difficult questions and bringing uncomfortable information to light, President Trump is retreating from a distinctly American principle. It’s a principle that previous occupants of the Oval Office fiercely defended regardless of their politics, party affiliation, or complaints about how they were covered."

"The phrase 'enemy of the people' is not just false, it’s dangerous," Sulzberger continued. "It has an ugly history of being wielded by dictators and tyrants who sought to control public information. And it is particularly reckless coming from someone whose office gives him broad powers to fight or imprison the nation’s enemies. As I have repeatedly told President Trump face to face, there are mounting signs that this incendiary rhetoric is encouraging threats and violence against journalists at home and abroad."