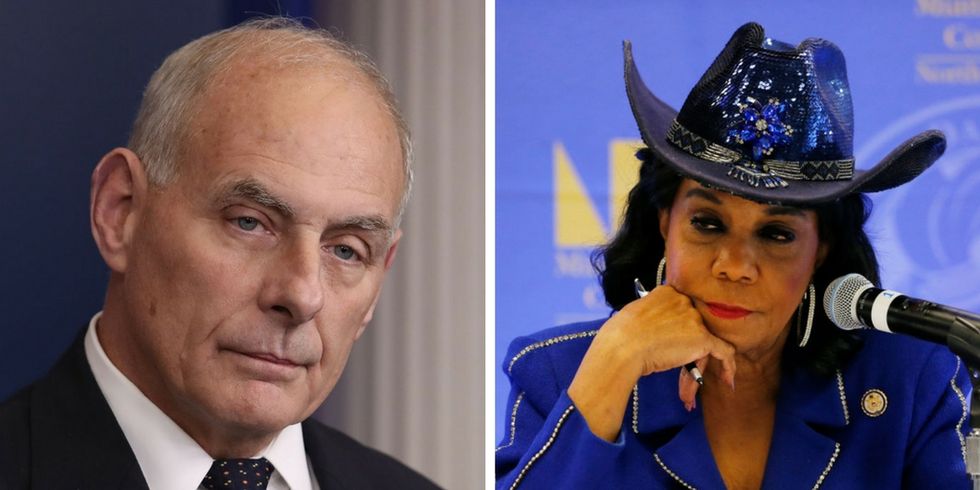 Retired general and White House Chief of Staff John Kelly recalled anything but the truth on Thursday when rushing to the defense of his president, who has been busy refuting via tweets the testimony of a Green Beret’s grieving widow, his mother, and a Miami congresswoman. Trump denies telling the soldier's widow on Tuesday, during a brief condolence phone call, that her husband “knew what he signed up for.”

Making a rare appearance in the White House briefing room, Kelly attacked the Miami congresswoman, U.S. Representative Frederica Wilson, with a story about an FBI building dedication that was anything but accurate.

Kelly told the tale of a 2015 dedication ceremony in Miramar, which he attended along with the congresswoman, of a new FBI building named after two bureau agents killed during a 1986 bank robbery shootout - this much is true. But then he criticized Wilson for claiming at the ceremony that “she got the money,” instead of focusing on the heroism of the fallen agents.

“A congresswoman stood up, and in a long tradition of empty barrels making the most noise, stood up there in all of that and talked about how she was instrumental in getting the funding for that building, and how she took care of her constituents because she got the money, and she just called up President Obama, and on that phone call, he gave the money, the $20 million, to build the building, and she sat down,” Kelly told reporters.

Representative Wilson responded with the facts.

She said that the funding for the building was approved before she was in Congress, and that her role was sponsoring the legislation that named the building after the agents, Benjamin Grogan and Jerry Dove. In other words, Kelly remembered his information backwards.

“He shouldn't be able to just say that, that is terrible,” Wilson said. “This has become totally personal.”

While video or a full transcript of the 2015 ceremony has yet to be obtained and reviewed, it is known that construction of the building was bid on before Wilson was elected, and that it cost $194 million - not the $20 million Kelly quoted in his White House briefing room remarks.

“That is crazy that I got [the money] and Mr. Obama just gave it to me,” Wilson said while speaking with reporters. "That building was funded long before I got to Congress. I didn’t say that. I have staff, people who write the speeches. You can’t say that.”

In 2015, Miami Republicans praised Wilson for sponsoring the bill that would dedicate the FBI building in the name of the fallen agents. At the ceremony, Director James Comey also thanked Wilson for her legislation. “Representative Wilson truly did the impossible, and we are eternally grateful,” said Comey.

A White House administration spokesman issued a statement defending their Chief of Staff: “The White House stands by General Kelly’s account of the event.”

Late Thursday night, Trump showed he too was not finished with the controversy, tweeting: “The Fake News is going crazy with wacky Congresswoman Wilson(D), who was SECRETLY on a very personal call, and gave a total lie on content!”

The Fake News is going crazy with wacky Congresswoman Wilson(D), who was SECRETLY on a very personal call, and gave a total lie on content!
— Donald J. Trump (@Donald J. Trump) 1508468022.0