'Fox and Friends' Tried to Scare A Panel of Independents With Its Reporting of the Migrant Caravan, Regretted It Immediately 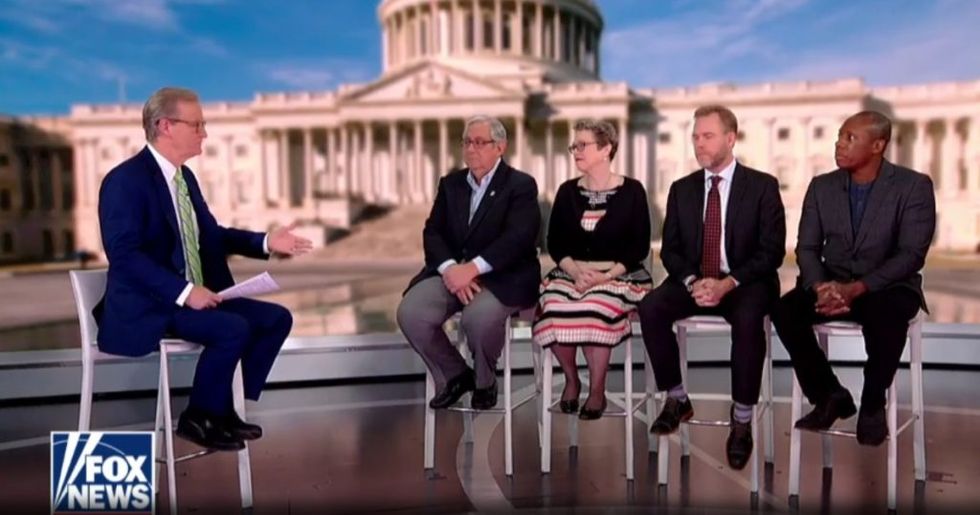 Fox News host Steve Doocy on Monday asked a panel of independent voters how they felt about the caravan of thousands of refugees migrating through Central America toward the United States. Their response was not what Doocy expected.

Doocy asked the panel: "How big a problem is that the United States has uneven immigration laws?"

The first answer was a bit more empathetic than what Doocy had in mind.

Doocy followed up by asking what the United States should do if the traveling crowd's numbers increase to 20,000.

"This is the mightiest country on the planet, I think we can handle a caravan of people, unarmed, coming to this country," said Michael Willner, adding that the United States should "process them properly."

Doocy turned to Cathy Stewart of the New York Independence Party to get her take on the subject.

"I think that the immigration crisis that we're seeing is a result of the failure of the two democratic parties to actually engage the issue," Stewart said. "Instead, they use it as a partisan football."

She went on to say that "no political party owns independent voters."

A third panelist named John Opdyke referred to the political situation in Central America as a "humanitarian crisis" that has been minimized to "talking points."

"There’s a humanitarian crisis taking place in Central America. And yet, this issue gets turned into a complete political football," Opdyke told Doocy. "There’s very little honest discussion about what’s actually happening, it gets turned into talking points."

"Treating this as an invasion is a bad idea and it's going to end horribly if it is treated that way," Commey cautioned. "So I think people have to realize these are human beings coming here and there needs to be a real solution offered in dealing with it."

This is so fantastic. When the Fox & Friends gang do everything they can to get a group of independent voters frigh… https://t.co/RfPRO3v5Ww
— Rex Huppke (@Rex Huppke) 1540245110.0

Doocy's closing remarks after not hearing what he wanted to hear had a Trumpian familiarity.

“Sure, but the backdrop is the midterms, so it all becomes political," Doocy said. "So let’s see what happens!”

Click this link to watch the full segment. The topic of immigration begins at around 4:10.

Doocy's attempt at fearmongering was pretty obvious to anyone watching.

We need to do better.

Love the independent voters' statements in the panel. Of course the @foxandfriends host is sure "some are up to no… https://t.co/9K9kKIgYAZ
— Andy Kuehner (@Andy Kuehner) 1540257314.0

There's a reason they're called "independent."

Independent voters a crucial voting bloc both parties must woo ahead of next month's midterm elections. Immigration is a hot-button issue, and if this panel is any indication, Republicans may have a problem.