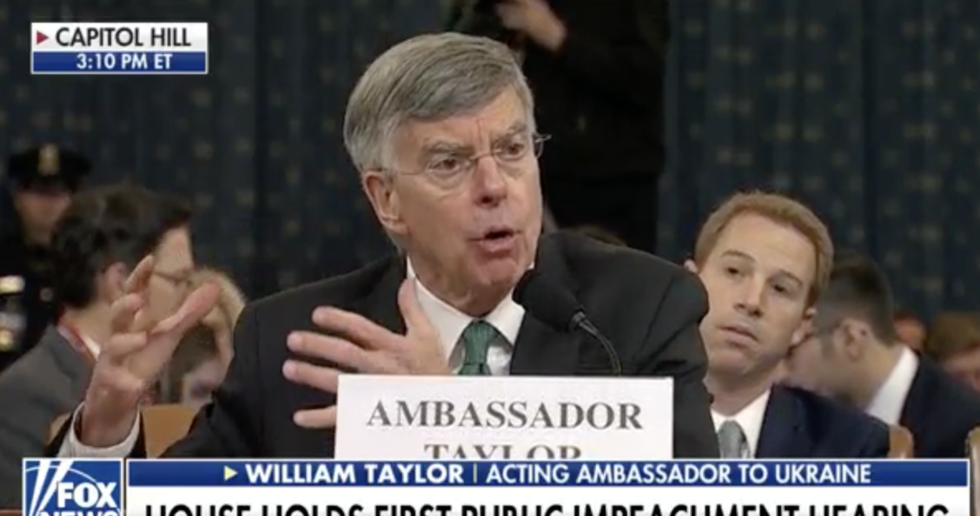 Eyes across the nation are glued to their screens to view the first public hearings in the ongoing impeachment inquiry against President Donald Trump.

Every major channel is covering the hearings, but their coverage varies—particularly on conservative network Fox News.

While MSNBC's coverage featured a graphic describing Taylor's position in the state department as well as his prior closed-door testimony, Fox News described him using White House talking points, such as Trump's description of him as a "Never Trumper," and the White House's assertion that his testimony relied on "triple hearsay."

Fox News does have journalists and analysts who have tried to cover Trump's dealings impartially, but they were nowhere to be found in Fox's impeachment hearing coverage.

And while multiple non-news affiliates of the networks are interrupting their regular entertainment to cover the hearings, Fox isn't.

Fox's motto is "Fair and Balanced," but people are calling the network out for being anything but balanced in its coverage.

@DanielleMisiak @Kris_Sacrebleu MSNBC is based in reality and Fox is located somewhere out there in Bizarro World. What else is new?
— Mr_Scorpio (@Mr_Scorpio) 1573666737.0

House Republicans questioning Taylor and Kent are repeating many of the same talking points. It's almost like Fox News is an arm of the Republican Party (or White House for that matter.)