Well, that explains a lot. 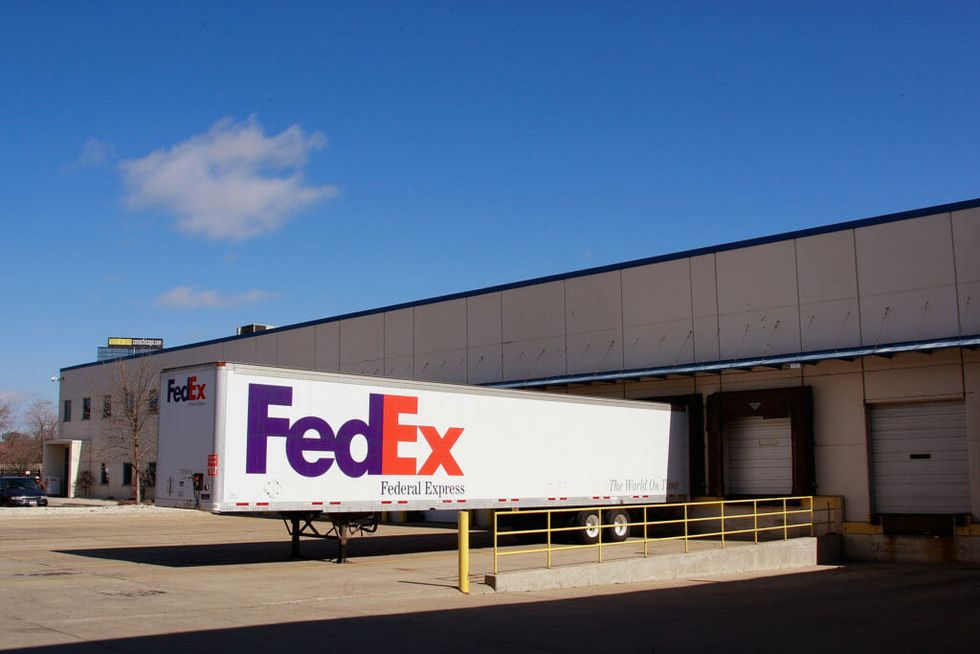 A FedEx trailer sits at a loading dock at one of the company's distribution centers March 19, 2009 in Chicago, Illinois. (Photo by Scott Olson/Getty Images)

Earlier this week, in response to repeated calls to sever its ties to the NRA, FedEx told Business Insider that "the NRA uses UPS and not FedEx" for shipping from its online store. The comment was part of a larger statement in which the delivery service announced its intention to "provide important, clarifying facts."

And while the NRA's online store confirms that it uses both the US Postal Service and UPS to ship products, the relationship between the gun rights organization and the courier runs much deeper than previously believed.

An internal company document obtained by ThinkProgress reveals that FedEx's decision to stand by the NRA has less to do with shipping NRA-branded merchandise and more to do with shipping guns. The document, ThinkProgress notes, "outlines in great detail precisely how FedEx has secretly agreed to bend its own rules on gun shipments for powerful forces in the gun industry, including all major gun manufacturers and the NRA itself."

A FedEx employee provided the document (labeled “Confidential information. Internal use only") to ThinkProgress on condition of anonymity, citing their concern that sharing the document would result in termination.

According to FedEx's 2018 Service Guide, “[f]irearms must be shipped via FedEx Priority Overnight service,” and handguns will not be transported via FedEx Ground. But FedEx has been selective in how it applies its rules: The document shows that the company brokered a deal with dozens of gun manufacturers and dealers to "woo" the industry away from competitors with lower shipping costs.

“Some customers have been approved for an exception to ship firearms with a 2-day (AM or PM) service,” the document reads. The customers in question are 86 firearms manufacturers and dealers, including such major players as Smith & Wesson, Colt, Glock, SIG Sauer... and the NRA.

FedEx's confidential policy allows these customers to ship guns at much lower costs, allowing it to maintain an advantage over its competitors. A source who spoke to ThinkProgress said "the exceptions to FedEx’s handgun policy started within the last five years in response to increased competition from UPS."

Bombshell report by ThinkProgress on FedEx's secret deep, and previously undisclosed, ties to the not just the gun… https://t.co/xf18u6e0e7
— William LeGate (@William LeGate) 1519786770.0

ThinkProgress obtained the document shortly after FedEx publicly declined to end discounts for NRA members, arguing that to end member discounts would be discriminatory, even if it disagrees with the organization's policy positions.

“FedEx is a common carrier under Federal law and therefore does not and will not deny service or discriminate against any legal entity regardless of their policy positions or political views,” the statement said. “FedEx has never set or changed rates for any of our millions of customers around the world in response to their politics, beliefs or positions on issues.”

Commentators on both sides of the aisle weighed in on the news.

FedEx is afraid to take a stand for gun safety and for keeping schools safe because they want to corner the gun shi… https://t.co/ZI2S83oKPS
— Joe Scarborough (@Joe Scarborough) 1519812550.0

Bombshell report by ThinkProgress on FedEx's secret deep, and previously undisclosed, ties to the not just the gun… https://t.co/xf18u6e0e7
— William LeGate (@William LeGate) 1519786770.0

And they may just pay a steep price:

Several major companies have already cut ties with the NRA in response to the backlash following a mass shooting in Parkland, Florida earlier this month which left 17 people dead. The list of companies that have dropped NRA deals thus far is as follows:

In a statement, the NRA criticized these companies, calling their decision to end ties a shameful display of political and civic cowardice."

"Let it be absolutely clear. The loss of a discount will neither scare nor distract one single NRA member from our mission to stand and defend the individual freedoms that have always made America the greatest nation in the world," the statement reads.