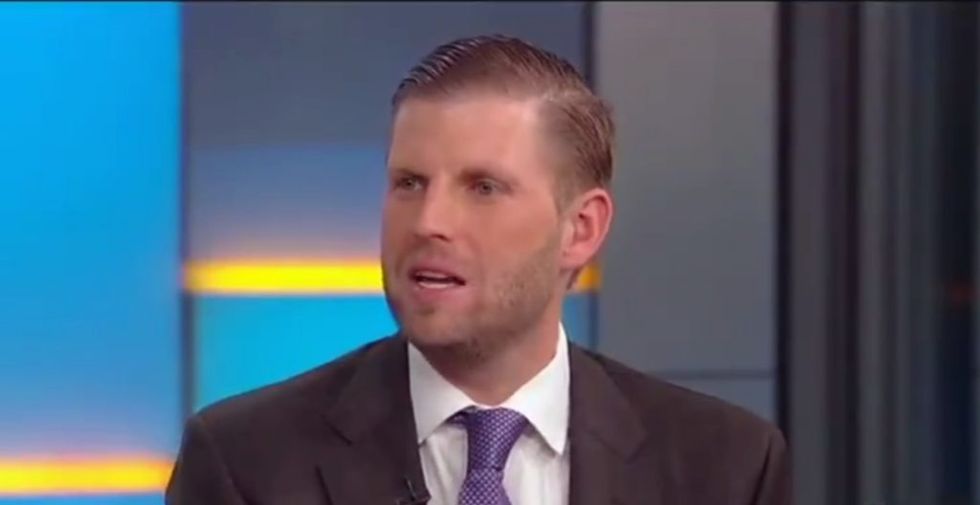 President Donald Trump began an all out assault against respected investigative journalist and author Bob Woodward in advance of his latest book—Fear: Trump in the White House. Other members of the family and of the Trump administration soon joined in.

The latest to try to discredit Woodward is the President's second son with first wife Ivana Trump, Eric Trump. He currently serves as Executive Vice President of the Trump Organization.

But people paid less attention to the younger Trump son's claims of unfairness to his father than they did to the phrasing he chose to use. In an appearance on Fox & Friends Wednesday morning, Eric Trump stated Woodward's book was popular only because it made his father look bad.

Watch an excerpt of the Fox & Friends Trump appearance here.

Eric Trump is not Jewish, nor is Bob Woodward. Why use the term "shekels?" Why not dollars or a slang term for United States currency, like bucks?

The shekel is the official currency of Israel. It also has roots in ancient times. Keegan Hankes, who helps track hate groups as a senior research analyst at the Southern Poverty Law Center’s Intelligence Project says the term also gets used as an anti-semitic slur.

"Shekels is a derogatory term used by white supremacists that ties into the myth that Jewish people only care about money [and is] used constantly by the extreme right and particularly neo-Nazis."

The use of shekels by hate groups ties into two pervasive anti-semitic staples: portraying Jewish people as greedy and claiming they also secretly control all media. References to globalism are also thinly veiled anti-semitic slights.

Was the use deliberate—a dog whistle to the alt-right white supremacist movement—like some think? Or was shekels simply a term the Trump Organization VP grew up hearing when people referred to someone being greedy?

When people grow up hearing racist or ethnophobic or misogynistic language, they are likely to repeat it in their normal speech as adults—often without even realizing it.

People online caught the unusual choice of words right away as the following reactions show.

@sarahcpr @RacismDog I definitely was not expecting the word "shekels," which I haven't heard in decades
— Aaron Rupar (@Aaron Rupar) 1536759100.0

Woodward—of Woodward and Bernstein Watergate expose fame—wrote 17 books about Washington politics before Fear. From the first collaborative effort with Bernstein—All the President's Men—to now, Woodward covered every President in office since Nixon.

President Donald Trump was not singled out.

Fear: Trump in the White House is based on hundreds of hours of recorded conversations with first hand witnesses, meeting notes, memos and personal diaries. In a recorded phone call from August, the President and Kellyanne Conway acknowledge that Woodward made at least a half dozen attempts to speak to the President to get his side of the story while writing the book.

The book released on September 11, 2018. It broke Simon & Schuster's pre-sales record and already sold 750,000 copies, the publisher announced Wednesday, the day after the book arrived in stores.