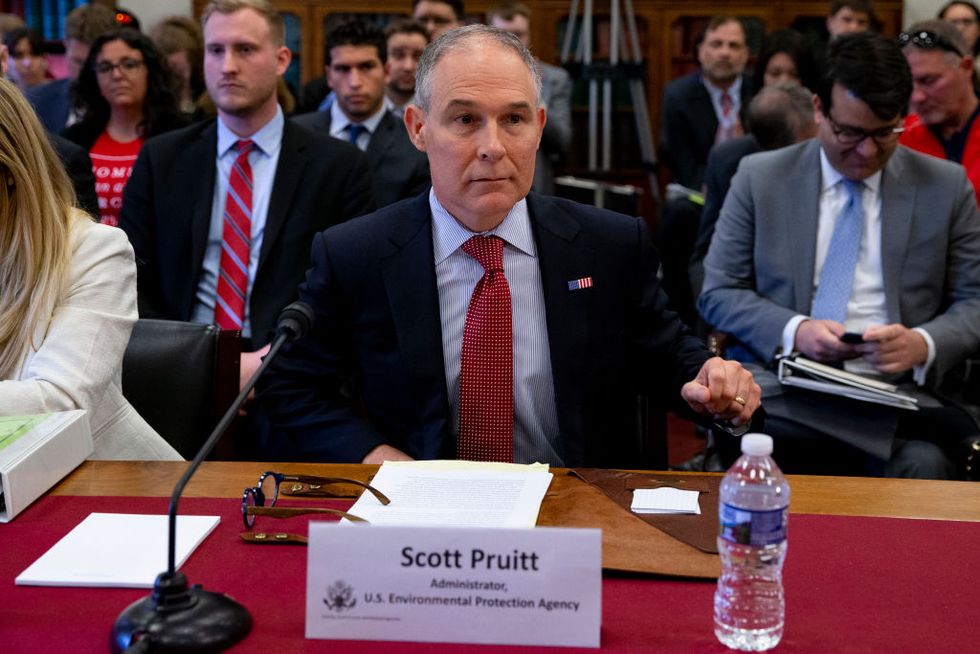 WASHINGTON, DC - APRIL 26: EPA Administrator Scott Pruitt takes his seat prior to his testimony before the House Appropriations Committee during a hearing on the 2019 Fiscal Year EPA budget at the Capitol on April 26, 2018 in Washington, DC. The focus of nearly a dozen federal inquiries into his travel expenses, security practices and other issues, Pruitt was on the Hill to testify about his agency's FY2019 budget proposal. (Photo by Alex Edelman/Getty Images)

Scott Pruitt is under investigation. Again.

The Environmental Protection Agency’s (EPA) inspector general announced it is investigating Pruitt, who is the EPA administrator, and his use of nonpublic email accounts. This is the twelfth investigation into the administrator's behavior while heading the agency.

Records show four accounts were created for Pruitt. Pruitt's spokesman claimed that one account is used for administrative tasks and that another was used only briefly.

The news comes as Pruitt is expected to face questions about his spending habits and other unethical behavior at a Capitol Hill hearing today on the agency's budget.

"I'll say it again: Scott Pruitt must resign, and he must resign now before he uses your taxpayer money for his next luxurious vacation," wrote Nancy Pelosi, the Minority Leader for the House of Representatives.

I'll say it again: Scott Pruitt must resign, and he must resign now before he uses your taxpayer money for his next luxurious vacation.
— Nancy Pelosi (@Nancy Pelosi) 1526339325.0

"In any other reality, Scott Pruitt would resign in shame," wrote Senator Tina Smith (D-MN).

During his last congressional testimony, which took place three weeks ago, Pruitt was asked about "his unprecedented security detail, travel practices and massive raises given to aides," according to CNN.

During his testimony, Pruitt:

Pruitt has also had to defend his use of a Capitol Hill condo that he rented for $50 a night. Pruitt’s use of the space is the target of ethical concerns because the condo is owned by J. Steven and Vicki Hart. Mr. Hart is a lobbyist in the healthcare arena.

President Donald Trump defended Pruitt's conduct as head of the EPA as recently as last week. Trump was sitting two seats away from Pruitt at a meeting with auto industry representatives when he was asked if he had confidence in the EPA administrator.

"Yes, I do," the president replied.

The president previously came to Pruitt's defense after his use of the Capitol Hill condo became public knowledge.

"While Security spending was somewhat more than his predecessor, Scott Pruitt has received death threats because of his bold actions at EPA," the president wrote at the time. "Record clean Air & Water while saving USA Billions of Dollars. Rent was about market rate, travel expenses OK. Scott is doing a great job!"

The latest questions came about as a result of a New York Times investigation which found that Pruitt dined with a Vatican official, Cardinal George Pell, last year when the EPA knew Pell was under investigation for child sexual abuse. According to the Times, the EPA did not list Pell on any of the public schedules released under the Freedom of Information Act.

Responding to that controversy, EPA spokesman Jahan Wilcox said Pell was "one of 12 to 15 individuals" who attended the dinner. Wilcox added that the "EPA had no knowledge that he was coming to the dinner."

"It is incorrect to report that any knowledge of the allegations against Cardinal Pell were raised to Administrator Pruitt's level. It is also important to note that Cardinal Pell was not charged until June 29, 2017, three weeks after the dinner with several Vatican officials took place," Wilcox said.

Afterward, White House Press Secretary Sarah Huckabee Sanders said she did not know whether the president was aware of the Times' latest reporting when he expressed his confidence in Pruitt.