The Last of the Northern White Rhinos -- Can We Save Them If Less Than a Handful Remain? 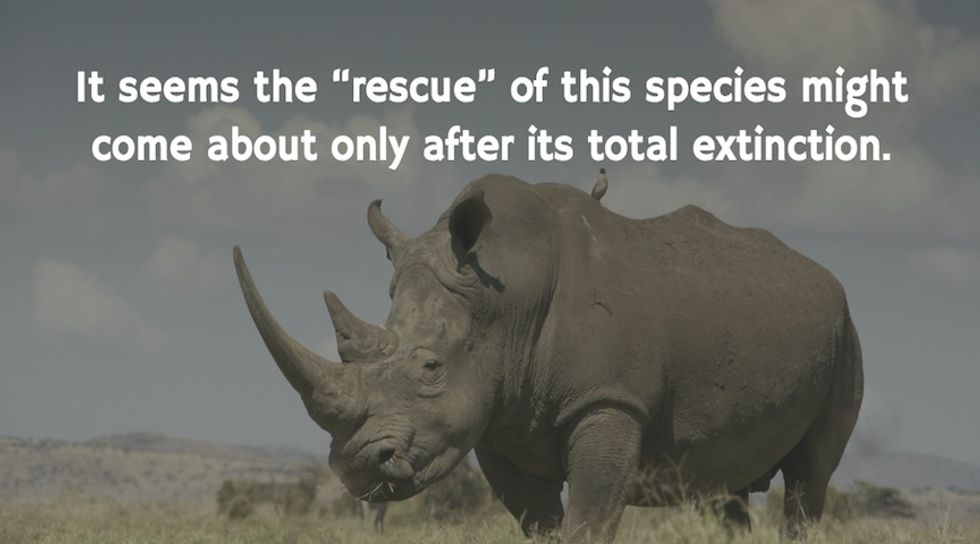 The San Diego Zoo Safari tweeted a sad and solemn message using #Nola4ever to gather condolences from the Twitterverse upon the loss of one of only four northern white rhinos left on the planet.

Nola the rhino died on Sunday, November 22nd, following complications from a bacterial infection, and complications from age. It is a loss that not only inspires grief for the animal herself, but fears for the entire species. It seems the “rescue” of this species, however, might come about only after its total extinction.

The last remaining northern white rhinos--including two females and one male--are at Ol Pejeta Conservancy in Kenya, watched around the clock by armed guards. Not only is there a limited gene pool from which to draw, but none of the living rhinos can reproduce. The lone male is so old he can no longer mount a female, and his gametes are of dubious viability. One remaining female is also nearly as old as the male and cannot sustain a 16 month pregnancy. The other remaining female is infertile.

But scientists are grappling with a way to bring the northern white rhino back from the brink, using every tool available, and even betting on future technologies to resurrect the species posthumously. One such effort, in-vitro fertilization (IVF), would combine harvested gametes and then implant them in a womb. It works well in human reproduction, but it isn’t yet possible with rhinos. The uterus of each species has specific cultures, and those cultures need to be identified and replicated in order for embryos to survive the IVF process. Scientists are looking towards horses for ideas, as they are a close

cousin of the rhino, but IVF in horses has not been very successful either. Even if IVF were successful, however, none of the current northern rhinos could sustain a pregnancy, so another subspecies of white rhino would have to carry the pregnancy.

Another effort involves inseminating southern white rhino females with the sperm of the northern white rhino, or a stem-cell generated sperm. This would diversify the subspecies, but there may be no other option.

In any event, it is likely science will not find a way to save the northern white rhino until long after the remaining living ones are dead. Even then, there is great uncertainty over whether attempts to reproduce the species will succeed. Harvesting genetic material is the priority now--getting enough mature eggs and stem cells to use when technology is further along. This may be the only hope of bringing these animals back from extinction.

This isn’t the only time in recent history that a white rhino population has nearly been lost. In the early 20th century, the Southern white rhino was hunted nearly to

extinction. With only twenty animals left, a conservation effort began to protect their habitat from poachers. One hundred years later, the Southern white rhino now number a hearty 20,000 in the wild. They are still being poached for their ivory, but now their horns are microchipped, in hopes of both preventing and tracing poacher activity.

Since 2014, three of the six remaining animals have passed, Nola’s death being the most recent, having followed another female in July of 2015 and a male in December of 2014. At the times of their deaths, all the rhinos were too old and unhealthy to breed.

It is a sobering thought that an animal with no natural predators could simply vanish in the span of a few decades. Humans were the cause, but now we may be its only hope for salvation.